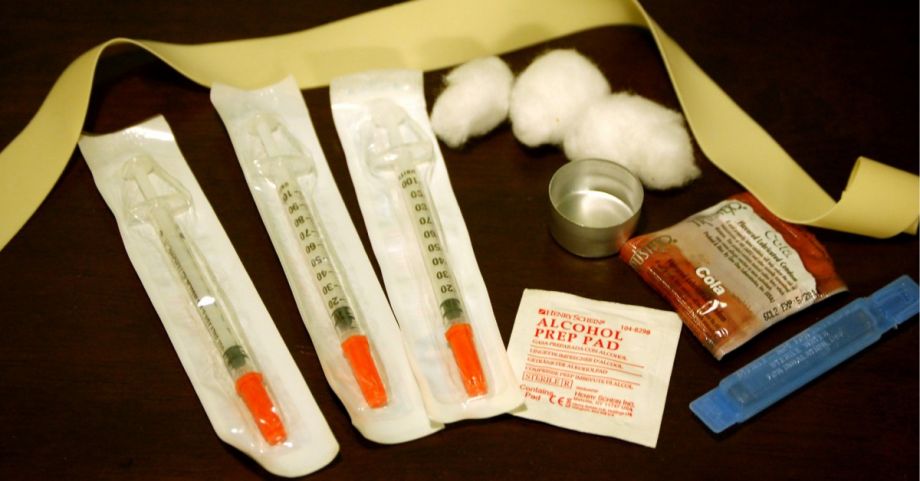 When Annina van Voorene moved to Lake County, California, in 1993, she was struck by the high level of intravenous drug use and a lack of clean syringe exchanges for drug users. Van Voorene, who grew up in the Netherlands, says she had family members with drug addictions, and had witnessed how syringe exchanges could work in Europe.

Van Voorene, who worked as a social worker, asked a State health department official about setting up a clean needle exchange, but she was told Lake County just wasn’t ready for one.

This was despite the fact that Lake County is particularly vulnerable to infectious disease. Even today, the CDC designated it one of 220 counties most at-risk for outbreaks of HIV and Hepatitis C as a result of the opioid crisis.

“It just infuriated me,” Van Voorene says. In response, she set up her own needle exchange, despite having little experience. Van Voorene, now 62, has been running that syringe exchange – one of only 57 syringe service providers in the state — on a voluntary basis for 25 years. For most of that time, she did so while holding a full-time job as a social worker, which she only left last year.

California is one of 36 states where syringe exchanges can operate legally, although providers still face opposition in some counties. Opponents have recently tried to shut down syringe programs in Butte County and Orange County, for instance.

To ensure the funds have the most impact, the state is working with a non-profit called Harm Reduction Coalition, a national non-profit that had its beginnings in Oakland, to help determine how the money is allocated.

Grants will range from $20,000 to $150,000 a year, according to Savannah O’Neil, a capacity building and community development coordinator at Harm Reduction Coalition.

Recipients will be determined by a bidding process concluding at the end of the July, with money allotted in August. An eight-person review committee, consisting of people with grant-making experience and people who identify as drug users, will award the bids.

O’Neil says the decisions will be based on criteria including need – taking into account public health data on drug use for the area the organization serves, as well as racial equity. The funds are meant to support staffing, she says, because syringe providers spend much of their time navigating clients to other services.

“Historically syringe services programs spend a bunch of time linking people into treatment,” O’Neil says. “I worked in syringe service providers for 12 years and I spent way more time connecting people with other care than giving out syringes.

And many providers have been operating with thin or non-existent funding in their respective counties for years.

Van Voorene has been running her syringe program, called “Any Positive Change,” out of a van owned by her 81-year old husband. For years, they were parked in front of a community center that was sympathetic to the syringe program’s mission. But new leadership at the community center forced her to switch locations; they now park in front of a nearby senior center in Lucerne.

Van Vooreene says if she’s awarded CHRI funds, she’ll be able to hire two part-time staff members to navigate people with services. She’d like to gradually transition out of the work herself and bring on staff who can keep the project sustainable.

Others will use funds to increase hours for part-time employees. Jessica Smith is the former executive director of Humboldt Area Center For Harm Reduction. Smith says everyone who works at the non-profit is part-time, including Smith, who spoke to Next City on her last day before leaving for a new job at Harm Reduction Coalition. The Humboldt center reaches about 500 unique clients, she estimates.

“If it’s just one human managing syringe exchange it gets chaotic and stressful,” Smith says.

COVID-19 has only made staffing issues worse.

O’neil says because so much of California’s private and public infrastructure was closed due to the pandemic, organizations like Harm Reduction Coalition had to provide more services to people they serve, especially those living outdoors who need internet, food, hand washing or phone charging, things they might have otherwise found at a commercial establishment.

Braunz Courtney is the Executive Director of HIV Education and Prevention Project of Alameda County, an Oakland-based harm reduction non-profit that has been operating since 1992. The non-profit runs a syringe exchange in three Oakland locations as well as Contra Costa County, where they are the only exchange in the county.

Since COVID-19, they have been operating out of an RV, which has been travelling to six different homeless encampments to deliver services, Courtney says.

Courtney says that like other syringe service providers, they have had to improvise services for people without homes. The group’s “Drop-In Center” normally offers a food pantry and showers, but it’s been closed due to COVID-19, so it set up outdoor hand-washing stations.

Courtney says most of the people they serve are Black and Latinx, communities disproportionately impacted by infectious disease. “Every communicable disease, it always impacts Black folks the hardest,” he says.

Courtney says he’s not surprised that the state decided to give out the funds, as HIV Education and Prevention Project of Alameda County was one of the groups that lobbied state government in Sacramento. He says he’s not sure what convinced legislators, whom he worries are too often looking for abstinence-based strategies to get people clean.

“You can hear what you want to hear,” he says. “And if that is your end basis for some of these politicians, to get people clean, that is an option but each person is going to be different. Not everybody wants to get clean. Everybody just wants to be healthy,” he says.