Finding the Poetry in Infrastructure Design – Next City

Finding the Poetry in Infrastructure Design 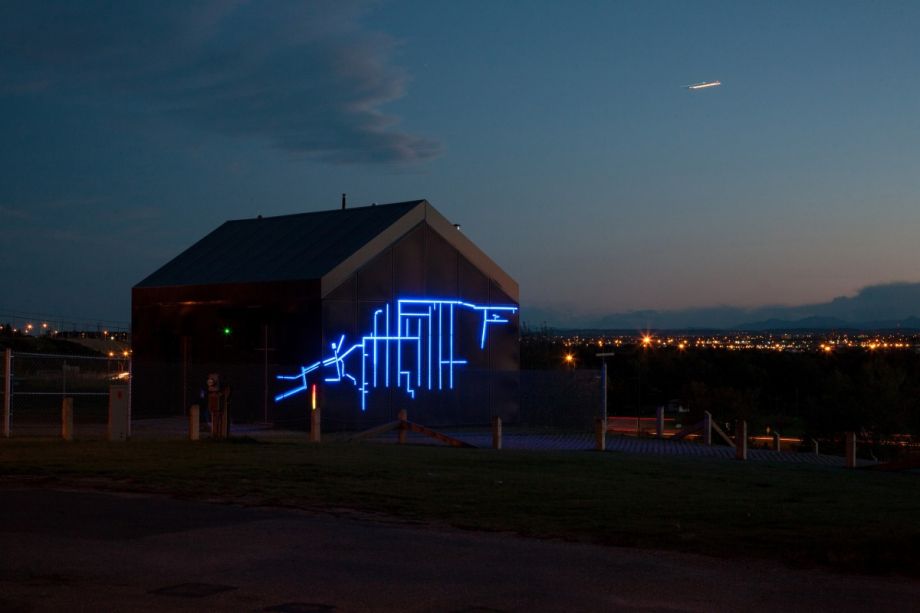 On a plateau overlooking downtown Calgary is a small, dark building overlaid with a glowing spider web of lights.

The crisscrossed LEDs on the Forest Lawn Lift Station form a graphical map of the 9 kilometers of pipe that feed into this building. Inside, a pump lifts Calgary’s wastewater to higher ground so it continues to flow by gravity to the Bonnybrook Wastewater Treatment Plant. Connected to instruments inside, the lights change color according to water volume and demand: blue when water flows freely, red when the system is taxed.

“So often these pieces of infrastructure are camouflaged. It’s almost like we’re embarrassed,” says artist Tristan Surtees. “Twelve thousand kilometers of pipe in a city is a pleasurable thing. It’s quite a poetic thing.”

Surtees and collaborator architect Charles Blanc have a penchant for making poetry from city utilities. As multidisciplinary art studio Sans façon, the duo create works that both highlight and transform spaces, often in partnership with cities. They’ve shrink-wrapped public sculptures in Saskatoon and replaced streetlights with spotlights in 14 cities around the world.

Their transformation of the Forest Lawn Lift Station is just one piece of their larger mission to introduce Calgarians to their watershed, through unique public art program Watershed+.

Sans façon designed the program in 2008 and 2009. At the time, Calgary’s Utilities and Environmental Protection department (UEP) was developing a public art plan, funded by the city’s one-percent-for-art program. The Glasgow-based San façon studio had already received a commission in Calgary for a six-month public art project tied to a creek restoration. When the UEP put out another call for artists to lead a visual language project around the water cycle, Sans façon applied.

“Where we really saw the opportunity was creating an emotional connection between people and their watershed,” says Surtees. “How do you contribute to people’s relationship to their environment?”

The result was Watershed+, an ambitious and comprehensive 25-year plan that embeds artists directly into the UEP. Artists collaborate with city agencies and engineers from the outset of new infrastructure projects, rather than being brought on for decoration or educational purposes at the end.

Sans façon took program lead for its pilot period in 2011, working deeply with the UEP, and the water and parks departments, along with other agencies. Beyond installing public art, the artists work to bring creative practice into the city’s water management as a whole. And Watershed+ involves other artists in a variety of capacities and durations: for short-term and long-term projects, exhibitions, residencies and more.

“All of the projects have really been about relationships,” says Surtees. “It wasn’t just the artist away in their studio that comes up with this brilliant idea. You’re not commenting from the outside. You’re becoming part and parcel of how the agency expresses itself.”

Take the process of designing the Forest Lawn Lift Station.

At a 2011 meeting between Sans façon and a core group of city officials whose missions relate to the water cycle, the Forest Lawn Lift Station came up. It was at the end of its life cycle and in need of replacing, but design hadn’t yet begun — an ideal time to involve the artists.

“There was a great balance between what the artists needs were and what the engineers needs were,” says Charles Huston, of Calgary’s Water Services. “The artists [were] really keen on learning what the Lift Station does. We went out and did several tours of many, many, many lift stations so they could understand what’s inside, what are the guts, what’s the mechanics.”

An image emerged of teasing out of the water system a reading of what’s happening in the city above. Sans façon worked with Associated Engineering and MTA Architects to design a simple building sheathed in perforated steel panels and with Nemalux LED Lighting to create the light display behind the steel shell.

Lee Hang, senior project engineer, says the station was designed with a 75-year life cycle in mind, to accommodate future growth. Because the design is modular, the LEDs could be rearranged “to tell the changing story in that community.”

Huston says the light display even serves a practical function: Operators can know by looking at the building whether machinery is malfunctioning below.

Forest Lawn is just one of 40 sanitary wastewater lift stations in the city; 33 more handle just stormwater. And yet, until this project, “I’d never seen one once,” says Surtees. “[They’re] not visually present in the fabric of the city.”

Some local residents prefer it that way. Because the old lift station at Forest Lawn had to be kept in operation while the new one was being built, the new station is in a different, higher, more visible location. For homeowners whose views of downtown now include the glowing lift station, responses have not been universally positive.

Huston says Watershed+ has challenged the agency’s thinking about infrastructure. The question remains whether art can change the public’s thinking.

“I wouldn’t say we are ashamed of our infrastructure, but we do tend to hide it,” says Huston. “We tend to want it to blend in and not be noticed. [Watershed+] really changed our thinking on that. How do we connect our citizens and our customers to what it really takes to live within an urban setting?”