At the Furthest Edges of China’s Urban Growth, a Transit Invasion – Next City

At the Furthest Edges of China’s Urban Growth, a Transit Invasion 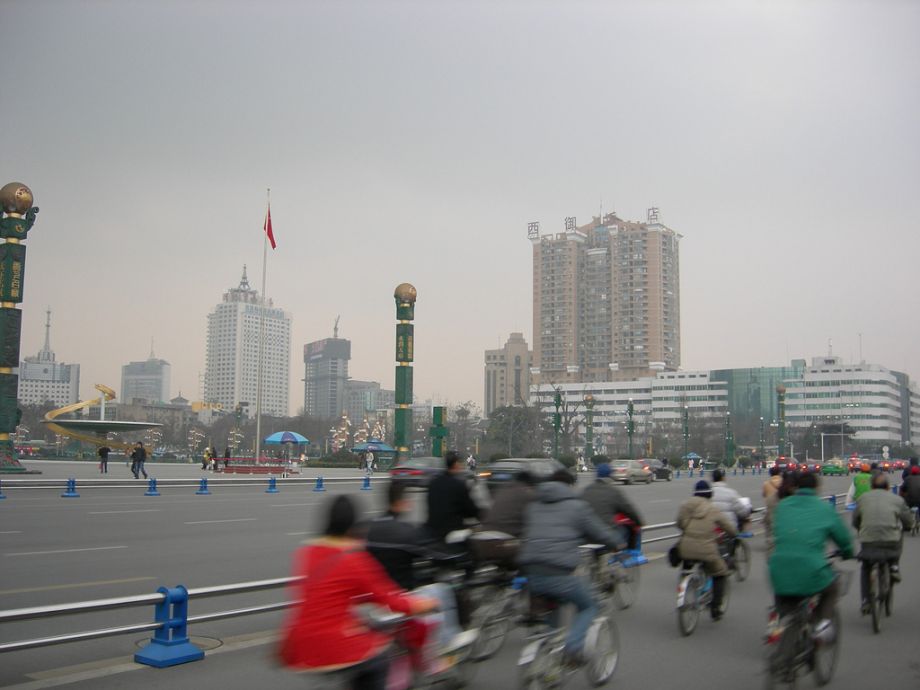 One of the first signs of urbanization in China’s countryside often comes in the form of changing transportation options. Photo credit: Kristine Riskaer via Flickr

In the far south of Chengdu, past the Tianfu Software Park and the New Century Global Center, where just two years ago there were vast, open fields, the final bolts are being tightened on the extension of Metro Line 1. The metro follows Tianfu Boulevard from the city center all the way south until it terminates in a collision of dirt, cranes and newly paved highway — the front lines of Chengdu’s urban expansion.

Here, black tar and fresh concrete dry on suburban streets like Huafu Boulevard, a five-lane roadway that divides a new crop of exclusive gated communities from the ramshackle chaos of the old country towns sprawling south into the fields that feed the city. And it’s here that Chengdu’s transportation future is being forged. New bus stops gleam from the edge of the sun-baked concrete. Sparkling new bi-articulated buses accept smart cards instead of the cash-for-paper-ticket system that prevailed just weeks ago, and still does all over the countryside.

Six hundred million Chinese live in cities, and in less than two decades, that number will be around 850 million, an increase equal to the entire population of the United States. This rapid urbanization has turned transportation in China on its ear. In the late 1980s, only 30 percent of the Chinese population used public transportation, and less than five percent drove cars. The rest got around with bikes, carts, or horses. Most walked. But by 2009, just under 40 percent used public transportation, and car share soared to around 35 percent. For most of the country, that has meant apocalyptic clouds of smog and traffic jams epic enough to make the international news.

These inexorable trends have forced an infrastructure overhaul of cities across the country, and few are positioned for a more rapid transportation makeover than Chengdu. There are two metro lines in operation right now, the north-south Line 1 and the southeast-northwest Line 2. Line 4 is scheduled to be completed in 2014, and will add another east-west line, linking the industrial centers of the far western part of the city with the auto-manufacturing hub of the east. Line 3, one of the more onerous construction sites as it weaves right through the heart of the city, should be finished by 2015. By 2020 the plan is to have 291 kilometers of metro lines.

As such, the city today is rife with construction. Work sites are festooned with placards reading, “Today’s annoyance for tomorrow’s convenience,” the motto meant to assuage frustration with the detours and concrete rubble choking Chengdu’s traffic lanes.

Residents’ frustration with all the construction came to a head early last year during the building of the elevated BRT line along the Second Ring Road. The ring road is the busiest street in Chengdu, and for just under a year it was jam-packed. Even side streets off of the ring road were impassable, as cars frantically sought outlets. Social media erupted in protest, hounding local officials for malfeasance and lack of vision. Not a single conversation went more than two minutes without mentioning traffic or pollution or both.

The BRT – both the process of construction and the final result – illustrates the contradiction and promise of China’s urbanization. The project gave people headaches, polluted the atmosphere and was riddled with graft and embezzlement just like every other construction project in China. But now that it’s completed, it works as advertised and has improved mobility markedly.

The Second Ring Road has changed from an unusable nightmare of gridlock to an efficient people-moving machine, with the rapid bus network bringing passengers from the south side to the north side in less than 10 minutes and elevated lanes providing a release for the ever-increasing number of drivers. The street-level lanes are beautiful, flat and rarely jammed up, even during rush hour. The outcry of the last two years has morphed into murmurs of surprised praise as residents flock to the newly decongested arterials.

It’s hard to remember the days when European and American cities were growing at a clip, clogging the lives of urbanites with dust and traffic, because those days are a century past. Construction in China is undoubtedly problematic: callous displacement, corruption, faulty materials, greed – all of this is a part of the country’s urbanization drive. But so is convenience, comfort, efficiency and, in the long term, cleaner air and less congestion. When the cranes are in the way and dust is in the air, it’s easy to focus on today’s annoyance. But a ride on Chengdu’s new buses and subways force one to acknowledge, even grudgingly, a better tomorrow.