It would be fodder for opposition barbs if the 2016 DNC is held at the Barclays Center. (Photo by Norman Oder)

Big real estate projects sometimes go through name changes, but the announcement August 4th that the Atlantic Yards mega-development near downtown Brooklyn, which has faced steady controversy since it emerged in 2003, would become Pacific Park Brooklyn, was an unusual, strategic and dubious adjustment.

The new name surely aims to erase the project’s taint, one that provoked lawsuits over eminent domain and sweetheart deals, a documentary (Battle for Brooklyn), and even musical theater (In the Footprint: The Battle Over Atlantic Yards).

Of course, that’s not what Atlantic Yards developer Forest City Ratner said. The new name, according to a press release from Greenland Forest City Partners, the joint venture led by Forest City’s new Chinese government-owned partner/overseer, “highlight[s] the borough’s newest open space. Pacific Street aligns with the center of the project site, connecting it to the rest of Brooklyn.” 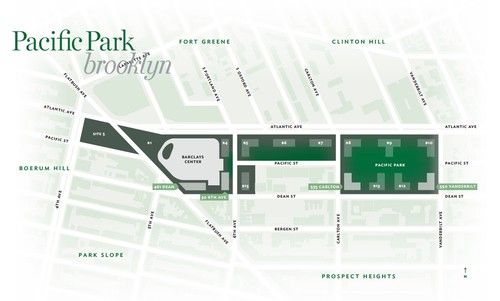 Curbed reported that “the new name coincides with a new phase of the project, with work [according to Forest City Ratner CEO MaryAnne Gilmartin] moving ‘from pre-development to vertical.’” Renderings were released for an upcoming residential tower, as well as a stylized outline (above) of the project’s buildings, which minimizes their likely bulk compared with other site plans released by Forest City.

The developers laid it on thick. “This is an incredibly important name to signify there’ll be eight acres of publicly accessible open space, and it connotates [sic] Pacific Street, which is a beautiful street that runs from either side of the project up into Prospect Heights, down to Boerum Hill and all the way down to the water,” Forest City rep Ashley Cotton, smiling professionally, told NY1. Then again, until the name change, the open space — apparently not fundamental to the project’s identity — did not appear on the summary slide used by parent Forest City Enterprises in investor presentations.

I-Fei Chang, CEO of Greenland Forest City Partners, said in the press release, “We’re also thrilled that we’ll be moving forward on the design of a beautiful park that anyone in the city will be able to use.”

The ironies, contradictions and deceptions spill forth.

They’re not actually starting to go “from pre-development to vertical,” since one tower has been going “vertical” for well over a year. (Despite the touting of “affordable housing,” it and the next two towers will contain many subsidized units out of range for average Brooklynites.)

Nor will the “borough’s newest open space” arrive soon, but rather in increments, over 10 years. Nor will the greenery be a “public park,” but rather privately managed, with more restrictive rules.

However open to the public, the park-amid-towers will mainly serve the huge new population, some 14,000 people in 6,430 apartments, over 22 acres. In fact, the open space ratio per person will be well below city guidelines.

Furthermore, “beautiful” Pacific Street — once known for weeds that helped New York State dubiously declare blight and pursue eminent domain for Atlantic Yards — does not connect the project to Brooklyn. One segment was demapped for Barclays Center arena (long billed as the centerpiece of the project), and another, a block away, serves as construction staging and will ultimately supply open space.

Needless to say, Pacific Street is geographically far less important than parallel Atlantic Avenue, the northern border of the project site. The latter name is part of the Atlantic Center and Atlantic Terminal malls across the street, both developed by Forest City.

Pacific was so insignificant that Forest City is paying the Metropolitan Transportation Authority $200,000 a year for 20 years to rename the longstanding Atlantic Avenue-Pacific Street subway hub as Atlantic Avenue-Barclays Center.

A name including “Yards” isn’t inherently toxic; one of parent Forest City Enterprises’ major projects is The Yards, in Washington, D.C. To ditch “Atlantic Yards” for “Pacific Park” is likely aimed to game Google, distancing the project not just from the controversy but even watchdog journalism.

Greenland, the new majority owner, had to be on board. China, of course, has no trouble erasing history (see Tiananmen Square).

The name Atlantic Yards was a dodge in itself. It suggested that an 8.5-acre railyard stood for a 22-acre site that incorporated private property and public streets, thus diminishing the need for eminent domain. The anodyne Pacific Park seems aimed at new residents willing to pay high rents and condo prices.

For now, adding to the confusion is that Empire State Development, the New York State authority that oversees/shepherds Atlantic Yards, has no plans to change the name of the Atlantic Yards Land Use Improvement and Civic Project. (Maybe they were blindsided.)

Whether Atlantic Yards or Pacific Park, the name distracts from the fact that the Chinese government is now the beneficiary of significant public assistance, including a zoning override, eminent domain, low-cost land, special tax breaks and even low-cost financing via immigrant investors.

It would be curious — and fodder for opposition barbs — if the 2016 Democratic National Convention comes to the Barclays Center, which is co-owned by Russian oligarch Mikhail Prokhorov, majority owner of the NBA’s Brooklyn Nets, and part of a larger project mostly owned by the Chinese government.

“Atlantic Yards will be many things to many people,” Forest City Ratner once said on the original Atlantic Yards website. Today, even that vague claim is too much.

Brooklyn journalist Norman Oder writes the Atlantic Yards (& Pacific Park) Report watchdog blog, and has contributed to numerous publications, including Columbia Journalism Review, BKLYNR, and the New York Observer. He is working on a book about Atlantic Yards/Pacific Park.