Brooklyn Bridge Could Get a Pedestrian-Friendly Expansion – Next City

Brooklyn Bridge Could Get a Pedestrian-Friendly Expansion 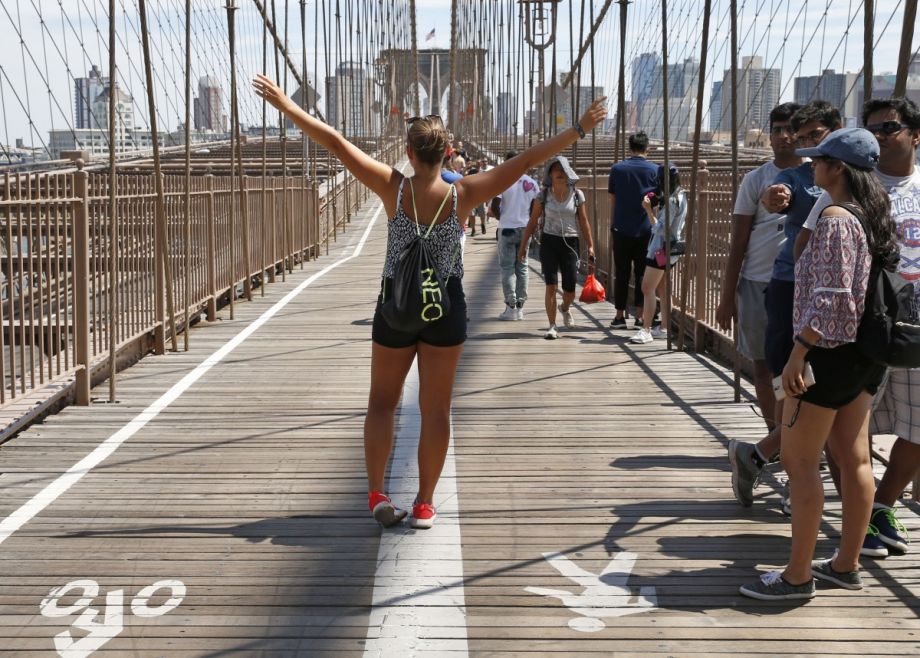 Although the Brooklyn Bridge is one of New York’s most beloved landmarks, it could use a few improvements. With pedestrian and bike traffic traffic over the bridge more than tripling at peak hours since 2008, transportation officials said this week that they will consider ways to increase capacity on the pedestrian promenade that runs above the bridge’s six vehicle lanes. The New York Times reports that the NYC DOT has contracted with consulting firm Aecom to conduct a seven-month engineering study on the bridge’s capacity and possible options for expansion.

“We’ve decided the time has come,” says Polly Trottenberg, the city’s transportation commissioner. “We want to think in a deep, thoughtful way about the next evolution of the bridge.”

The $370,000 study is the first step, but Trottenberg cautioned that reaching any conclusions for the 133-year-old bridge will take some time. Currently the pathway is divided into pedestrian and bike lanes, but users say they are too narrow, and that growing crowds often force walkers into the path of moving bikes. Pedestrian traffic during peak hours has increased from an average of 511 people per hour in 2008 to 1,917 this year. Bike traffic has increased too, up to an average of 358 cyclists per peak weeknight hour compared to 185 in 2008.

Despite the masses of pedestrians and cyclists crossing the bridge, officials say fewer than a dozen collisions are reported every year between pedestrians and cyclists. A redesign would look for ways to separate them further. A conceptual rendering released by the NYC DOT depicts a central bike lane separated by barriers from pedestrian pathways on either side. A painted crosswalk and mini stop sign tell cyclists to pause to let pedestrians cross. To accommodate such a design, the promenade would need to be expanded, possibly by building decks atop the girders that run above the vehicle lanes.

A rendering of a possible design (Credit: NYC DOT)