Outside Boston, Park Offers Multisensory Experience for All – Next City

Outside Boston, Park Offers Multisensory Experience for All 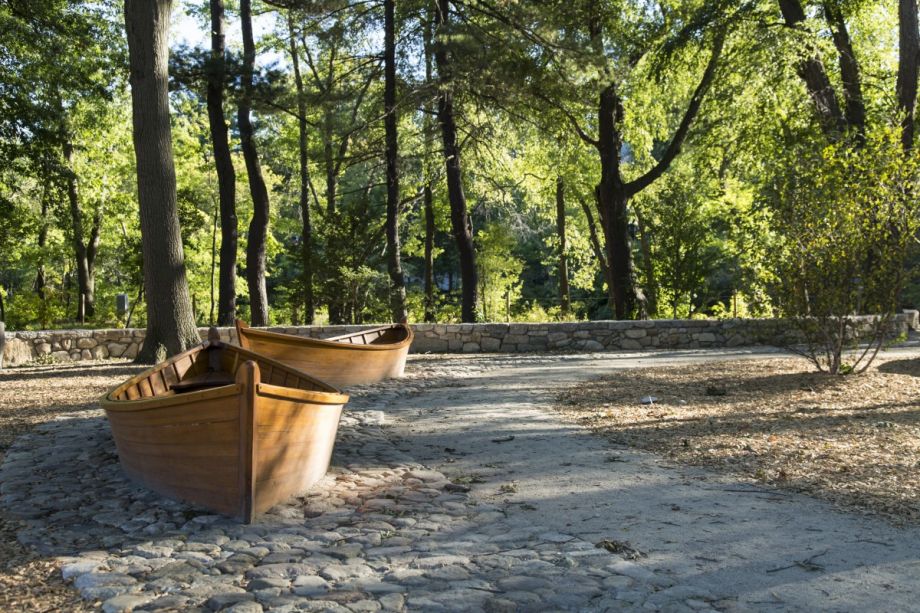 The new Watertown Riverfront Park and Braille Trail in Massachusetts exemplifies not only innovative accessible design, but the potential of effective private-public collaboration to nurture an idea to fruition.

Nearly 10 years in the making, the park, 8 miles from downtown Boston, offers a peaceful wooded area for people of all abilities and ages to stroll (or roll) along a wide and level path, get close to the Charles River on wood platforms, and relax or play in the “sensory garden” filled with creations by local artist and craftsman Mitch Ryerson.

For blind or visually impaired visitors from the nearby Perkins School for the Blind and beyond, the quarter-mile Braille Trail provides a guide wire with shape-coded wooden beads alerting users to features and information kiosks. Plaques in Braille and English explain area history and wildlife. A signaled street crossing and new sidewalks create a safe and welcoming gateway to the park.

For years, this narrow stretch of state-owned riverfront was neglected and hazardous, with eroded banks and a deteriorating asphalt path. Thick invasive vegetation rendered the path and the river barely visible from Charles River Road. There was no obvious access from the street.

“People were just going down on their own with machetes and hacking away vegetation to go fishing,” recalls Chris Hayward, Watertown’s conservation agent, historic preservation agent and tree warden. “The asphalt paths were beat up, the benches had been vandalized, and there was no money to replace them.”

Enter the Solomon Foundation, a family foundation with a mission to support the preservation and improvement of Greater Boston’s public parks and greenways.

The foundation kickstarted the riverfront project back in 2007 by funding the entire planning and design process and tapping local firm Sasaki to provide pro bono early stage design work.

Herb Nolan, Solomon’s deputy director, says that a willingness to test bold ideas is where private foundations can play a key role in catalyzing public projects.

“We can afford to try something and find out it doesn’t work. It’s harder for people in government to do that and have people feel they’re wasting taxpayer dollars,” Nolan says. “It’s key to come up with rudimentary cost estimates, reach out to the public and abutters and interest groups, find out if there’s opposition. We can poke the bee’s nest and get stung.”

When design, cost estimates and community awareness are already in place, it becomes easier for policymakers to act.

In this case, the Massachusetts Department of Conservation and Recreation was interested, but funds were scarce. The onset of the Great Recession didn’t help, and the project was “left for dead two times over,” Nolan says, before a federal Land and Water Conservation Fund grant came through to seal the deal, eight years after the idea was first conceived.

In the end, besides federal and state funds, money for the $1.5 million project came from the town of Watertown, the Perkins School and the Watertown Commission on Disabilities.

The Solomon Foundation also supported a part-time director for the Friends of the Watertown Riverfront group, which advocated for the park through the years. And late in the project, the foundation pulled Ryerson into the mix to provide what Nolan calls “the ‘x factor’—the bit of magic every project should have.”

At the Braille Trail’s sensory garden on a recent fall day, Travis Mazerall, a landscape architect at Sasaki, pointed out details that make for an accessible and multisensory experience.

“We tried to choose fragrant plants,” he noted. “Magnolia smells really sweet in the spring. Spicebush, when you crush the leaves, has a fragrant smell.” In addition, Ryerson’s sleekly crafted wooden boats are smooth to the touch and fun to climb on; a bench doubles as a marimba; a table-size chunk of stone has rough sides but a smooth-as-glass depression that catches rainwater.

Besides magic, into all projects a little resistance must come. Some residents objected to a stoplight that might slow parkway traffic flow. The final plan was a small compromise: The signal was installed, but remains flashing yellow for cars until pedestrians press the button to cross.

Kim Charlson, director of the Perkins School library and president of the American Council of the Blind, was an adviser on the park project. A blind person herself, Charlson took inspiration from the Massachusetts Audubon Society’s accessible trails projects and from a blind-accessible trail in Cape Town, South Africa, that she had experienced. One of her recommendations was the Braille Trail kiosks’ “roof top” shape, with the English on the front and the Braille down the back side.

“People ask, ‘Why put the Braille on the back?’” Charlson says, “but think of your hand going up the slope and down over the other side; it’s an easier way for your hand to read it without bending back at the wrist, which is uncomfortable. So that design is very ergonomic.”

As another layer of partnership, Perkins School has an agreement with the DCR to handle park upkeep and maintenance, marshaling volunteers to clean up the trail.

The new park has been a thrill for Perkins students, who range in age from 4 to 22. As much as park designers had to consider the needs of elderly and frail walkers and people using wheelchairs, for some, the park means rare freedom to speed up.

“The kids like to hold onto the guide wire and run,” Charlson says. “Blind kids don’t get many opportunities to run.”