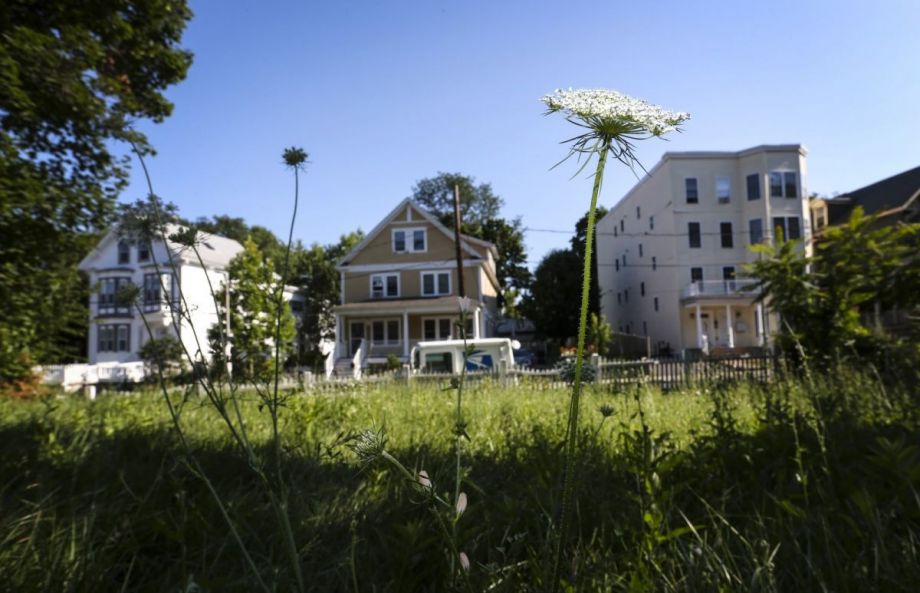 Excitement and optimism were palpable at the public launch April 27 of the Greater Boston Community Land Trust Network, forged over the past year by a dozen local neighborhood groups looking to build strength in numbers by joining forces. A packed community room buzzed with energy as residents and advocates chatted about various scenarios for community-controlled land use.

“This launch is coming at a critical moment in Boston history,” said Harry Smith, director of Dudley Street Neighborhood Initiative’s widely acclaimed land trust. “As one of the fastest-gentrifying cities in the United States, we’re here to either claim the future of our neighborhoods … or risk losing them to gentrification and displacement.”

In the community land trust (CLT) model, a nonprofit acquires land with the intent of developing it for community benefit — often building affordable housing — rather than for pure profit. A buyer of an affordable home purchases the building, but not the land beneath, helping keep the price low. Resale price is restricted, ensuring affordability for subsequent buyers, while also allowing homeowners to accumulate some equity.

CLTs go beyond housing in Boston. Chinatown CLT aims to preserve cultural spaces. In Mattapan, community leaders are looking to keep and attract small businesses. The Urban Farming Institute hopes to create a community land trust for commercial farming space, where low-income residents could receive agriculture training. “I like to think we are returning to the roots of the land trust movement by exploring how to use it for commercial urban farms,” said UFI’s Barbara Knecht, who notes the first U.S. community land trust was formed to preserve land for African-American farmers in Georgia in 1969.

But today’s fledgling CLTs face starkly different land acquisition challenges. In a growing Boston with a red-hot real estate market, any usable property — from a vacant lot to a decrepit rowhouse — might be scooped up quickly by deeper-pocketed private developers.

A new report by Tufts University’s Urban and Environmental Policy and Planning Department, released the same day as the CLT Network launch, calls land trusts a “proven solution” and makes the case for their implementation in Boston. The report includes recommendations for the city to increase its support by prioritizing city-owned land for CLT stewardship; establishing a CLT loan fund or line of credit; providing technical assistance; and exploring the establishment of a citywide multi-CLT “central server” hub.

“The finding is, here is a model that works — but it’s at a small scale. So how do we scale that up?” said Penn Loh, the Tufts UEP professor who oversaw the report.

Melora Hiller, co-executive director of the national Grounded Solutions Network, an affordable housing advocacy group, said there is a benefit to cities in supporting CLTs, with their capacity to create and steward affordable housing. “It ensures that the city’s investment of public dollars for affordable housing goes further,” she said. She cited a Lincoln Institute of Land Policy analysis that describes options and model practices for beneficial city-CLT partnerships.

Some cities have embraced CLTs fully. But, Hiller said, there are reasons others may be cautious. Prioritizing public land disposition for CLTs is a good way to assist, but cities may be unwilling to favor CLTs above other affordable housing programs.

“Most governments treat the CLT the same way they would treat other nonprofit developers,” Hiller said. “They’re all applying for money.”

But city support is crucial, Loh emphasized. “You’d be hard-pressed to find a successful land trust without some municipal support,” he said. “Land trusts really do require partnership with government.”

At the April 27 launch event, a Department of Neighborhood Development (DND) representative spoke of CLT support largely in generalities. “The city is committed to working with the network,” he told the crowd. “We want to collaborate with the network to make it scalable and sustainable.”

Loh, a former community organizer, expressed measured optimism in light of the new Greater Boston Community Land Trust Network. “I’ve seen many cases where because of community leaders coming together, things work,” he said. “While the odds may be stacked against it, the land trust model is not hypothetical. The fact that people are organizing around it bodes well.”