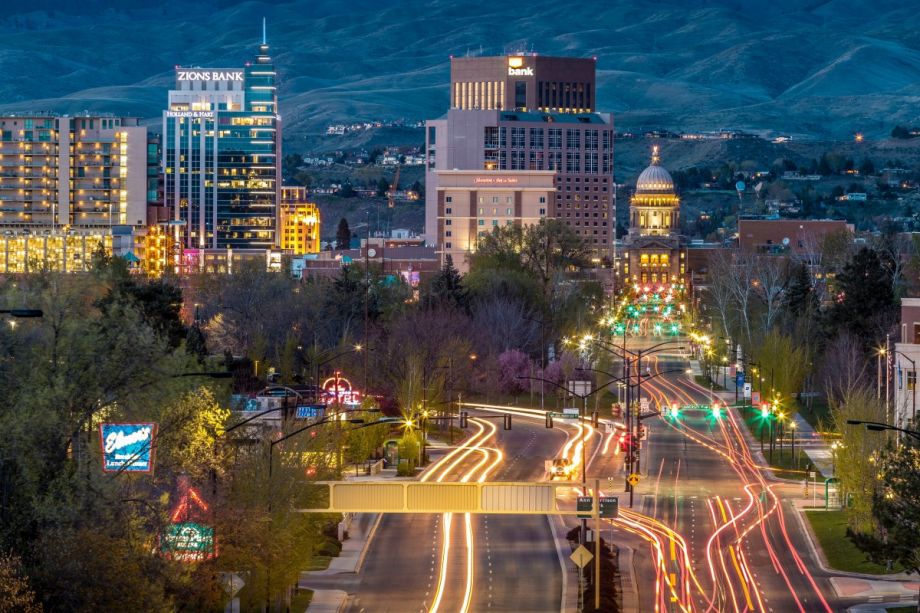 Colby Akers was doodling on the inside of a doorway in a back alley in Boise, Idaho, when the door to Moon’s Diner opened and hit him in the head. Confronted by the restaurant’s owners, Akers was afraid he was going to be chastised for the graffiti. He offered to wash it off. Instead, they told him to just make sure he signed his name and dated the artwork when he was finished.

That was the birth of Freak Alley, in 2002. Fifteen years later, the murals at what’s now known as Freak Alley Gallery (to encompass an inside art space as well as the alleyway) draw visiting and local artists alike. The alley runs between Boise’s busy, commercial 8th and 9th streets. Akers runs the space, curating featured artists and managing an annual repainting that makes room for new murals.

Freak Alley, alongside the less picturesque, neighboring Union Block Alley, is about to get a facelift. Funded through tax increment financing by Boise’s Capital City Development Corporation (CCDC), about $500,000 will go into repairing pavers and lighting for the alleyways.

That Boise is getting to the nitty-gritty of alleys speaks to the progress of a downtown makeover two decades in the making.

A financing period, determined in 1986 by the CCDC, for capital improvements to the city’s 10-block downtown will sunset next year. Over the last 20 years, downtown Boise has undergone a variety of revitalization efforts. The CCDC helped build the Grove Plaza, a 4-block park. A $65 million underground transfer system opened for the city’s public buses. The downtown convention center, Boise Centre, was expanded, and Utah-based Zion Bank completed its Idaho headquarters at the corner of 8th and Main — an area previously known as the “Boise Hole” because it had sat conspicuously empty for so long.

Urban renewal has a legacy in Boise, whose current population is around 220,000. In 1974, Brooklyn-based, Boise-bred novelist L. J. Davis wrote an article in Harper’s Magazine called “Tearing Down Boise.” In it, Davis lamented the loss of Boise’s Chinatown and historic buildings, many of which had been torn down long after cities around the U.S. had, in his estimation, already learned the mistakes of urban renewal.

Davis warned of the impending doom his hometown faced. “If things go on as they are, Boise stands an excellent chance of becoming the first American city to have deliberately eradicated itself,” he wrote.

The writer was particularly concerned about plans for a new shopping mall at the center of town — one that the Boise Redevelopment Agency (now the CCDC) advocated for, and would require razing eight blocks of existing commercial buildings and residences to build.

The prevailing attitude at the time lent itself to such a project. In his 1974 piece, Davis quotes the then head of the BRA, Carroll Sellars, as saying, “Let’s face it, most of these old buildings are junk piles. We’re not tearing down a damn thing that’s worth anything. If the historic preservationists had been around in olden times, the whole world would look like the Parthenon.”

But, in part due to preservation efforts that were able to identify a familiar threat, the mall was never built, and in the decade following, the tide began to turn.

In 1985, the city finally abandoned the idea of the mall and contracted with the American Institute of Architects to instead develop a pedestrian-friendly, outdoor shopping area along 8th Street. The following year, the city approved a master plan for the Central District that allotted funds to preserve existing historical resources, and began to build out 8th Street as envisioned. It’s now home to local shops and national chains, bars, restaurants, traffic flow that favors pedestrians, and a dedicated bike lane.

Though the master plan allocating resources to the area is about to sunset, Matt Edmond, who manages capital improvement projects at CCDC, says they’ve done what they set out to do.

“It’s pretty much built out,” he says of the area. “I don’t know that there’s much more to do with it. We’re doing some freshening up, repairing some bricks here and there, and the alleys fall into that.”

Edmond says the city was careful to allocate money for replacing potholed asphalt with nice brick pavers and increase the lighting, but not much more.

Edmond says the idea is to increase the use of the alleyways, but not necessarily change them. People are already traveling through them on foot, and vehicle access needs to be maintained to allow for delivery. Any programming will fall onto the plates of the city and the private businesses who back onto the alley.