Beyond the Ballpark: Thwarted Expectations for the Colorado Rockies and the Civano Town Center? – Next City

Beyond the Ballpark: Thwarted Expectations for the Colorado Rockies and the Civano Town Center? 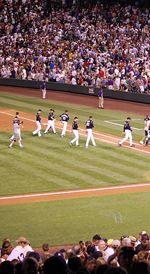 I’d like to begin with a moment of silence for the Colorado Rockies baseball team, off to another struggling start this season. It’s especially painful considering the Rox made it to the World Series last year. Though unlikely my favorite team would repeat, preseason expectations were high nonetheless. At least for me.

Expectations are a tricky thing to manage, since they are both internal and external, based on solid design and a large does of guesswork. Heightened by the press and built at a frenzied pace, expectations for sports teams are also rooted in deep team loyalty, which itself comes from the host city’s sense of the place.

Denver, for example, is a thriving metropolis brimming with unique urban development—projects like Belmar, Riverfront Park, and Stapleton. Plus there’s Coors Field itself, an exceptional ballpark surrounded by the vibrant LoDo neighborhood.

Some 900 miles south is Civano, a decade-old Sonoran desert village nestled in the shadow of the Rincon Mountains. The expectations for this desert town—for Civano was once envisioned as a new urbanist town just outside Tucson, Arizona—are not unlike those for the Rockies this year: grandiose, yet based on a clear vision and solid design. The challenge is in the implementation.

In 1999, prior to Civano’s groundbreaking, marketing materials fueled the community’s expectations:

“Civano’s master plan envisions construction of 2,300 homes and apartments and creation of 1,200 jobs on the site. In eight to twelve years, Civano will become home to over 5,000 people and the location of light industry, offices, and retail businesses. Commercial, cultural, and civic activity clustered in the village core will foster a small town ambiance. Businesses in Civano will provide jobs for some of the residents, reducing the need for automobile travel and its attendant air pollution.”

Expectations grew even more once national press got wind of the project:

“Residents stroll down greenway belts to the local supermarket. To restaurants. To their jobs. Bicycle traffic on paths exceeds auto traffic on the narrow streets. Creative people work in their homes. Residents greet each other by name, recalling the days of small-town America, before urban sprawl put large expanses between people and places.” (Energy Services Bulletin, April 1999)

Even former Vice President Al Gore helped out when he said, “Once in a great while each of us is lucky enough to have an opportunity to clearly see the future. Today, the grand opening of Civano is one of those unique times.”

With expectations set so high, whether for an Major League Baseball team or an urban development, a fair question is: Is it possible? Is it possible for a historically underachieving baseball team—last year the notable exception—to rise above the talents of individual players so the team plays well enough to take the National League pennant once again? Is it likewise possible for a new community to become a town that substantially reduces energy and water use, preserves the environment, enhances pedestrian and social access, and creates a variety of long-term jobs onsite?

The answer in both cases can be yes, but it takes incredible implementation well beyond vision and design. And clearly, it takes luck.

In Civano’s case, long-term success will be defined in large part on whether the town center comes to fruition. More than simply a grouping of commercial buildings, a town center is the core and focus of the community—commercial and civic. It provides employment and services accessible by foot (or bicycle or scooter or wheelchair, but not requiring the use of a car), and just as importantly integrates with the surrounding neighborhood in both design and access. Historical main streets provide examples and impetus for town centers: first-floor retail, restaurants, and markets; second-floor office space and residential units; and civic uses such libraries, meeting halls, and places of worship. Denver offers plenty of examples, as well.

Civano’s town center was originally envisioned as a full circle of mixed uses, primarily commercial and civic. Now only half of that land remains. Much of the remaining town center has been set aside for a new “green” hospital, built in phases and likely starting with an office complex. The developer, however, is winding up to pitch the retail pads of the site, now called Civano Pavilions. While many residents envision a small-footprint grocery store—the Fresh & Easy neighborhood market, for example (vote here to recommend our location on Houghton Rd. and Drexel: http://www.freshandeasy.com/locationSuggestions.aspx)—I’m concerned that the developer will settle for a gas station or other auto-oriented uses, as he has hinted.

And though there has been some opportunity for input, nothing as comprehensive as a design charrette or citizen involvement committee has emerged. So while the residents cheer or boo, we’re little more than sunburned fans when it comes to the development of the town center.

“At Civano, the stores will be equal to those of a modern shopping center, yet with service provided by your neighbors. Most important, these stores and restaurants will be available within walking distance along the quiet residential streets. Opportunities to conduct business from home and community-based employment will be part of one’s life.”

Here’s hoping the seasons for the Rockies and Civano’s town center pick up soon. Plenty of die-hard fans care deeply.