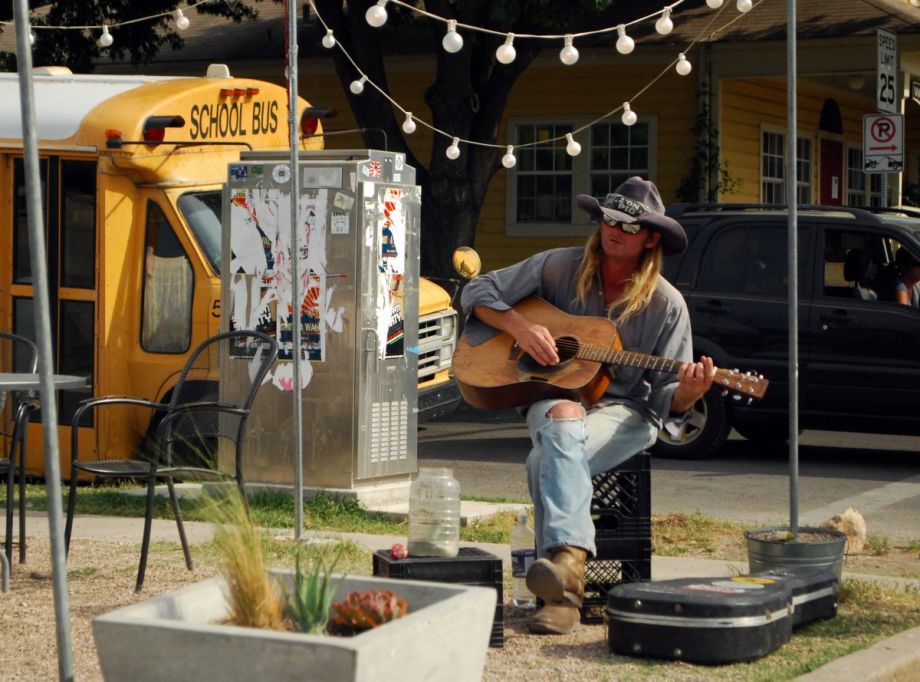 An unknown busker in Austin. The city calls itself the Live Music Capital of the World, but COVID-19-related closures have thrown that status into jeopardy. (Photo by ms.akr / CC BY 2.0)

What would the Live Music Capital of the World look like without live music? That is the glaringly real prospect Austin, Texas has faced since the first cancellation of SxSW in its 33-year history back in March. Music venues were some of the first businesses in the city to close during the initial wave of lockdowns and will be some of the last businesses to reopen. By the summer, nearly 90 percent of the city’s venues expected to close permanently before the end of the year absent direct government assistance.

At the same time this summer Austin faced its own overdue public reckoning with issues of race and representation, particularly in regard to the city’s disappearing Black community – all in spite of its outward-facing reputation as the most liberal city in Texas. “Internally with city staff we were coming to the same conclusion, that major work needed to be done to right the many systemic wrongs around race in Austin’s history - both politically and culturally,” says Erica Shamaly, Music & Entertainment Division Manager with the City of Austin.

Austin has been identified as the most economically segregated city in America. Overtly racialized rezonings and redlining throughout the 20th century, initiated by the city’s deliberately racialized 1928 City Plan, have shrunk and concentrated the city’s African American presence to a small section of the city’s Eastside.

Today a lack of affordable housing, rising gentrification, and the oversized influence of the city’s ballooning – and overwhelming white – tech sector are driving out the city’s nonwhite population. Austin now has the unfortunate distinction of being the only one of the ten fastest growing cities in America to see its black population decline in recent years.

Now Austin’s City Council has approved an aid package that seeks to address both of these issues – providing a lifeline to venues that have been holding on by a thread since March while seeking to address longstanding structural and systemic inequities in the cities’ famed music sector by. The $5 million Live Music Preservation Fund will provide immediate cash and technical assistance to help stem the overwhelming risk of closures across the city, and to access most of the money, venues must pledge to advance equity, diversity and inclusion efforts. The fund is part of the larger $15 million Save Austin’s Vital Economic Sectors (SAVES) package, with additional $5 million relief grant packages for legacy businesses and childcare providers.

Stephen Sternschein, who owns the popular music venue and club Empire Control Room and Garage in the city’s Red River Cultural District, says that while he sees the city’s efforts to support venues throughout the pandemic as inadequate in meeting the scale of the challenge, he’s grateful the new funding has come through now. “The new federal aid package is really what’s going to save the music community, but the timing of Austin’s package is perfect because it will take a few months for federal funds to come through, and what we’ve been screaming about is none of these places have three months to survive.’

Through the new package, any music venue facing an imminent risk of closure is able to access immediate $20,000 cash assistance grants distributed in December and January and service support including ‘legal and accounting services; real estate advice and guidance on lease negotiations’.

Venues looking for more financial assistance and support are able to access enhanced funding of up to $140,000 over six months. To apply for and access this enhanced funding, the city is requiring venues to develop and undertake their own Equity Strategic Plan to advance equity, diversity, and inclusion efforts across the city’s predominantly white music industry.

Austin’s musicians of color and equity advocates in the city point to “glaring inequities and double standards,” little acknowledgement, and underrepresentation of the city’s talent beyond traditionally white genres like country music. There are limited networking and stage opportunities for emerging R & B, Rap, Hip Hop and Latin music artists. And small and mid-sized venues – the very spaces that have been most under threat of permanent closure and without the access to private capital larger venues have – are critical spaces for this to happen.

“Artist development happens in smaller venues. You can’t become Gary Clark Jr without [music venue] Antone’s. These rooms provide an essential service to the creative community, providing a place to hone your chops and build an audience and build a business,” says Sternschein.

This concerted push for making the city’s music economy more equitable has been led by Austin’s Music Commission, a music policy advisory board made up of musicians, members of the city’s music industry and representatives of Austin’s City Council and the office of the Mayor.

In July, the Music Commission created a dedicated Systemic Racism Working Group. Co-chaired by Jonathan ‘Chaka’ Mahone of the hip-hop duo Riders Against the Storm, who has been a longtime advocate for more ambitious and visionary commitments in this area, the working group made a formal push throughout this fall for an equity overlay to be embedded within the music venue preservation program.

Informed directly by recommendations from the Commission, the City outlines a host of specific action areas for venues and promoters to consider as part of their equity plans. “We want to promote events with more equitable outcomes – whether its billing and programming, audience development, talent buying, and bringing in new voices to do curation,” says Shamaly, who herself came to work for the City from previous roles in the music industry for Austin City Limits Live and the music festival Psych Fest.

All grantees will be required to participate in an Undoing Systemic Racism workshop this winter, led by a racial equity specialist who will then be available as an ongoing advisor to the venues as they put together their plans. Potential interventions a venue could add to its plan include professional development workshops and trainings for aspiring music industry workers of color; introducing artist residencies for emerging musicians; and bolstering networking and promotional efforts to open up regional and national touring opportunities for local musicians of color.

“The idea of figuring out how to create genre diversity through subsidies and community impact requirements is a good start, but there hasn’t been nearly enough done through these programs to provide a true pathway to create equity in the community.”

He points out that a separate $5 million rescue fund for legacy businesses – which will include some iconic music venues in the city – doesn’t have the same equity consideration requirements as part of their grant funding.

But Shamaly sees these equity plans as a beginning – and not an end – of what will be a long-term commitment and process in partnership with the city.

“What we don’t want for this program to be is a box-checking exercise where no one looks at these plans again after the grant ends. With every venue, we see this as an ongoing relationship. And we’re trying to lay the groundwork to wrap equity resources, training and support across our music programs, fully recognizing this as a long-term process.”