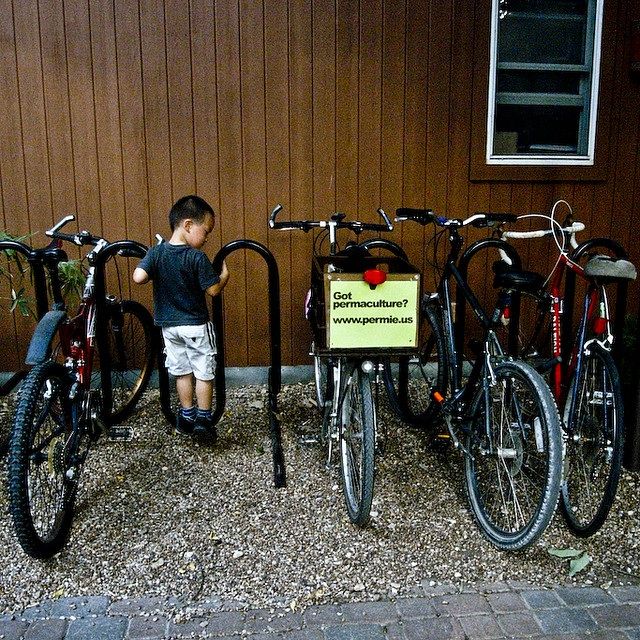 Casa de Luz has had no problems installing parking for bicycles but that is not enough, city officials say. Credit: Gideon Tsang on Flickr

Boneheaded local politics sometimes displace beloved institutions. Every city goes through the heartbreak of watching new zoning laws push out the local ice cream shop by the little league ball fields or throwing your favorite breakfast spot by the wayside.

Down in Austin, Texas, some remarkably backwards thinking on zoning is forcing out Casa de Luz, a longtime favorite macrobiotic restaurant and community hub. The alleged problem? Not enough parking spaces.

Casa de Luz has been in the heart of south Austin near Zilker Park for two decades. The restaurant faces imminent closure — or fines of up to $1,000 a day — if it doesn’t meet the city’s parking minimum requirement and provide 50 spots for employees and customers. New development has been flooding into south Austin — you could argue that Casa de Luz has been a cornerstone of the neighborhood through thick and thin — and new residents are aggravated by the lack of parking.

Owners been dealing with the issue since 2011, but are nearing the bitter end. They’re encouraging the Casa de Luz faithful to join them at a City Hall meeting on Wednesday. If the city doesn’t budge, Casa de Luz could be doomed.

Here you have a robust local business that has, in its 20 years, made south Austin more desirable to developers and prospective residents. Now the city of Austin comes along — perhaps in response to those developers and residents whining about parking — to push a successful local business out for not having enough parking. If it seems counterintuitive, that’s because it is.

Parking lots do not create jobs in the long term. They’re dead space — literal lots of empty space that fill up (though not always!) with cars that clog the streets and, if we really want to play out the string, harm the environment. Casa de Luz, which has been in south Austin longer than some of its residents have been alive, is a job-generating business that has helped create a vibrant community. But the city says if there aren’t 50 parking space, Casa de Luz has to go.

Austin isn’t the only city battling minimum parking requirements, which mandate businesses must develop or purchase the rights to a certain number of parking spaces reserved for patrons and employees. The costly regulation, which flies in the face of smart growth by discouraging both density and more environmentally friendly transportation alternatives, is standard in most cities and only recently has begun to face challenges from residents and business owners.

A proposed new retail development in the Anacostia neighborhood of Washington, D.C., which is serviced by multiple metro stops and bus routes, is facing suffocating parking minimums. Portland, a city that is always near the top of most bikeable city lists, is reinstituting parking minimum laws it got rid of in the 1980s. In New York, the minimums drive up already sky-high development costs and require developers to create “more parking spaces than they otherwise would based on what they believe their prospective tenants or buyers demand,” according to a report published last year by the Furman Center at New York University.

There has never been a study done on how much economic activity ends up thwarted by these requirements that prioritize cars over all else, but there are indicators that it could cost cities significant sums in displaced tax revenue. Again, parking lots don’t create jobs. Businesses like Casa de Luz do.

With new developments and density come more people. And, in a city like Austin that doesn’t have the transit options of Chicago or New York, that is likely to mean more cars. But Austin has the opportunity to put its foot down here and encourage the new residents of south Austin to think more creatively about transportation. There are a lot of ways to get to this place. Many of its patrons bike or carpool because of the lack of parking. It’s bordered by a park packed with bikers. And a bus — the 30, which picks up near the Texas State Capitol and goes right down Congress Avenue — drops off one-third of a mile from its doors on Barton Springs Road.

Still, the City of Austin’s Building and Standards Commission might shutdown Casa de Luz because some new residents complained about driving around the block three times looking for a parking spot.

Austin has a chance on Wednesday to push itself toward a more sustainable future — and save a beloved local institution, as well as the jobs it generates. Perhaps some enterprising citizen will suggest installing more bike racks.