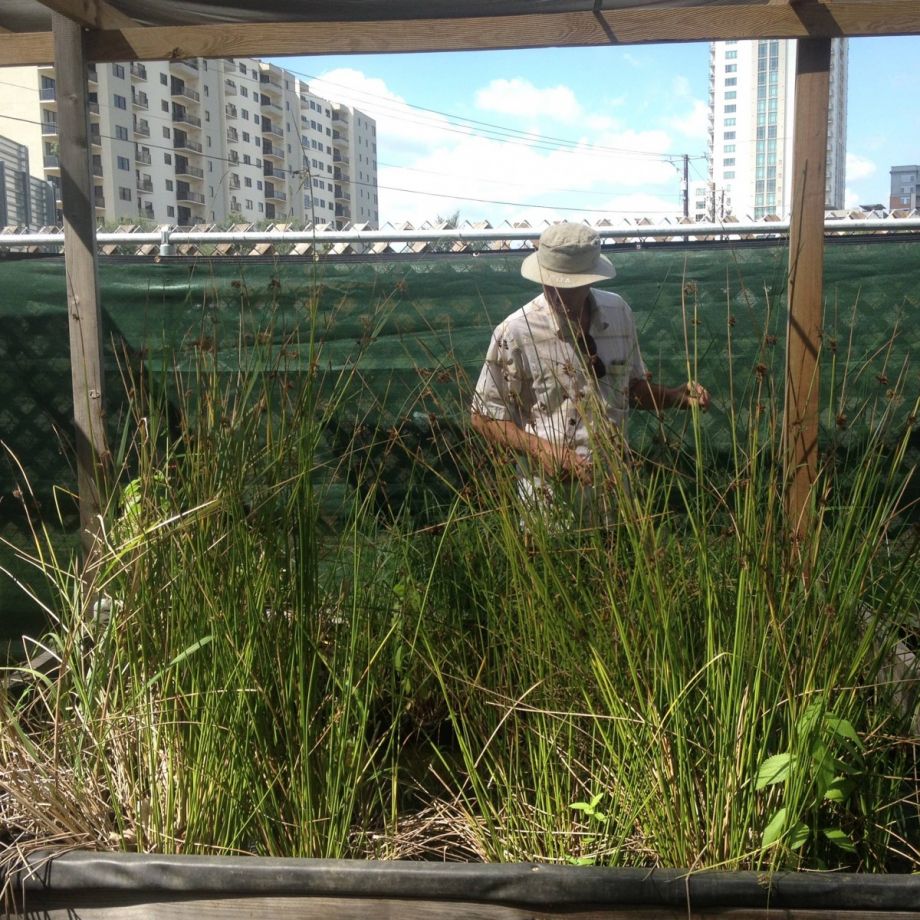 Rescued native plants in this city project will be used on restoration and greening projects. (photo credit: City of Austin)

If they’re being honest, many of the residents near the Blunn Creek Preserve in southeast Austin will admit they would have been happiest had Walmart never moved into the neighborhood at all.

A politically liberal, environmentally active and exceedingly determined bunch, the group who call themselves South River City Citizens worried that the new supercenter — planned for a spot just a few football fields from the creek’s headwaters — would dry up one of the city’s cleanest and most lush creeks, even if the store did comply with the minimum city regulations for managing drainage and runoff.

“They were worried that this part of the watershed was going to be degraded and water wouldn’t be soaking in slowly and percolating slowly back into the creek,” says Matt Hollon, an environmental planner who worked with an engineering firm hired by the group to study the creek and eventually draft a report that would spark a dialogue between Walmart and the citizens’ group.

Fast-forward 11 years, and the store at Ben White Boulevard and Interstate 35 stands as an example of what can be accomplished when a city empowers its citizens to negotiate with multinational corporations to protect its water supply with green and sustainable stormwater infrastructure.

Blunn Creek, which runs through some of the city’s most prized parks and neighborhoods and into Lady Bird Lake downtown, was spared after the retail giant agreed in December 2003 to add a number of protections demanded by the civic group during a months-long battle.

Among them are features like porous pavement in overflow parking areas, curb cuts in their parking lot that allow stormwater to flow to rain gardens, and a foot of gravel below their required water quality and detention facility that acts like an aquifer.

“Each of these projects, like this Home Depot nearby, they were active in looking into them,” Hollon, now a planner with the City of Austin Watershed Protection Department, says of the group. “We love that. We like having an educated community who understands this.”

The story was an inspiration to a contingent of city leaders and civic activists from New Orleans, who recently spent two days here in the region known nationally as “Flash Flood Alley” to research Austin’s solutions for managing stormwater.

With 66 percent of its water supply depleted by drought — and numerous world records in flash floods — Austin has much to teach in protecting its water supply and residents against storms that can wash pollution and sediment into thin reserves and turn normally anemic creeks into raging torrents.

In the four decades since the city has actively promoted solutions to stormwater troubles, Austin has focused on keeping its water clean, avoiding creek erosion that threatens properties, and controlling stormwater runoff that leads to dried up creeks and flash floods.

Austinites are happy to buy in on the city’s stormwater management programs, rejecting none of the city’s bond proposals on the issue over the last three decades.

They aren’t always happy with the city’s actions: Austin is embroiled in a lawsuit over what residents call unfair drainage fees, and citizens’ groups have lost some battles over development in areas like booming South Austin, resulting in drainage issues that the city is now trying to address.

But the city is recognized by the Environmental Protection Agency as having a long history of action in the area of stormwater management.

The solutions are not all green ones; the city has also had significant success with “gray” infrastructure such as the engineered detention ponds required by local environmental regulations.

But it’s the smaller, more localized and sustainable projects that advocates and city water officials say are the solutions of the future. Their cost-effectiveness, combined with an inherent component of civic engagement, and as a bonus, their contribution to the city’s landscape, make these interventions especially appealing to governments trying to do more with less.

“It’s going to be super amazing,” Hollon says. “We’re going to get more and more people learning how to understand and design these projects. You’re going to get a beautiful cityscape and it’s going to use that water so wisely and beautifully. And you don’t have to pump the lake dry to do that. That’s one of the beautiful promises of this.”

The group toured rain gardens, parking lots covered with porous pavement, including Walmart’s, bioswales in one of the city’s most popular disc golf courses and a rain-catching system at a local library.

The visit was part of a series organized by the Urban Institute, a non-profit policy research organization, and funded by Surdna, a foundation dedicated to, among other things, sustainable cities. [Surdna supports Next City’s coverage of green infrastructure, including articles like this on water infrastructure.] As part of the series, the New Orleans group, along with a roving Next City correspondent, will visit two more cities, Milwaukee and Philadelphia, to study their solutions.

For New Orleans, the challenges of going green are manifold, involving particular environmental complications, tight finances and politics. A historic city settled generations before Austin, the city’s older construction is costly to retrofit, which means a significant public investment. That requires community buy-in that — unlike in Austin — is no guarantee.

The New Orleans contingency lamented missed opportunities for green infrastructure in new development, including a Costco built in 2012 with run-off-generating, non-porous pavement. Unlike Austin’s Walmart, the Costco parking lot does not absorb excess rainwater in heavy downpours or prevent dirty water from running back into the watershed.

The meeting in Austin included members of the New Orleans Sewerage and Water Board, the Greater New Orleans Foundation, CORE USA, Center for Sustainable Engagement and Development in the Lower Ninth Ward, and the New Orleans Redevelopment Authority.

“Considering the drastic need that New Orleans has for stormwater management to help keep the subsidence from continuing at the level that it is, it’s extremely important for us to learn at every level of government what we can do to stop that from happening,” Guidry said.

In many ways, the stormwater challenges faced by Austin are universal concerns for most municipalities. When rain falls too fast for the ground to soak up, or for creeks to contain, it causes flooding, which can harm people and property and drag pollutants into the drinking water supplies. Older “gray” or engineered stormwater infrastructure works, but can be expensive to upgrade or retrofit or maintain, and cities are seeking more sustainable solutions that can be managed with little to no cost.

Austin does have some built-in advantages. Unlike New Orleans, which is below sea level, Austin can rely on gravity to carry its water from creeks into the lakes that hold its water supply, without pumps that can fail during a catastrophic event, such as happened during Katrina. Its drinking water supply — more than 50 watersheds — is also largely contained in the Colorado River Basin, which has no other urban areas to affect the quality and supply.

But mighty population growth and record-breaking development and construction have exploded in a city replete with creeks and tributaries that are vulnerable to unmanaged runoff.

Austin is also the heart of what is known as Flash Flood Alley, and for good reason. The topography that sinks to a bowl shape in Austin promotes intense bursts of rain that sit over the area. These storms get paralyzed by the meeting of Arctic air masses with the warm Gulf of Mexico waters, dumping huge amounts of rain in a short period of time.

Flash floodwaters swell creeks in a matter of hours and then disappear almost as soon as they came.

“When it rains here, it pours, and the flooding comes quickly,” explains Joe Pantalion, deputy director of the watershed protection department. “People can go to sleep and wake up the next morning, and it’s already rained and flooded, and the water is gone.”

From Large Scale to Small Scale

The city of Austin has been taking action to reduce flooding and increase water quality since the 1970s, when it restricted development on the 25-year flood plain and passed its first water quality ordinance.

In 1981, a devastating flash flood on Memorial Day weekend blew out all the creeks in the city, killed an estimated two dozen people and did nearly $100 million in damages to property. That flood spurred the city’s first drainage fees and numerous bond packages.

The evolution of the city’s stormwater management program has resulted in, among other steps, restrictions on development in the 100-year flood plain, incentives for commercial green infrastructure, and green stormwater infrastructure requirements on municipal buildings and parks.

Perhaps most critically, building green has been elevated to standard operating practice at City Hall. There is a team dedicated to green infrastructure in the Watersheds Department and city-sponsored programs like the Sustainable Stormwater Solutions program and Imagine Austin, which names green infrastructure as a priority.


The city also has an active public outreach program that involves neighborhoods and schools in the construction of rain gardens and gutters, as well as city-sponsored instruction for homeowners on how to harvest rain and build other green infrastructure.

The outreach has paid off. Today, there are some 56 small-scale projects, including commercial, public and those by individual landowners registered with the city, including: green roofing on a Whole Foods, rain gardens at schools and intersections, strips of vegetation near homes in the city’s flood-prone East Side.

These smaller-scale solutions on their own won’t help with big 100-year floods, Hollon says.

But even the smallest patches of green stormwater infrastructure add to the water quality and manage runoff in neighborhoods — and that can reduce localized flooding and make all the difference for residents, he says.

“If you used to flood every time it rains, or every couple of years, and now it’s every five years, that’s a big deal if you’re a homeowner,” Hollon said. “Everybody wants a Cadillac, but maybe we have a Buick. It gets it done and you have better quality of life.”