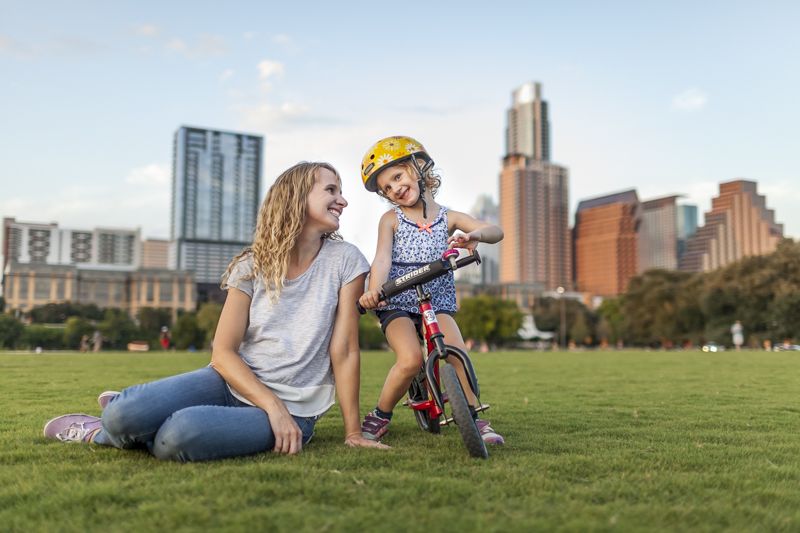 Picture this: A man in a greenhouse gently examining a succulent; a woman in sandals and a backpack waiting on a damp train platform; a mother reclining on a lawn beside her daughter on a tricycle; the Austin skyline arrayed out behind them. In these images, part of a new campaign by Austin’s Capital Metro, the connection to transit is subtle, and that’s the point.

The campaign, titled the Austin Collective, sent roughly two dozen photographers and videographers to document transit riders across the city. They made images and videos and recorded transit riders’ stories — not just about how they use the bus, but also about their lives. They captured a neighborhood ambassador who wants to become a paralegal, a mother of 15 who is now relishing raising her grandchildren, a disc golf competitor.

“The biggest challenge we face is in Austin this idea is that transit is for other people, it’s not for people like me,” says Amy Peck of Capital Metro’s communications department. In denser regions like the northeast, she continues, transit is a part of every day life. But in Austin, a more spread out city that’s largely designed for cars, the perception persists that people only use transit if they need to.

“We wanted to show that transit is used by everyone, from every walk of life, of every background here in Austin,” Peck says. “Because the vehicles really serve all of the life that goes on. It allows this daily life to happen.”

The project was spurred in part by Peck’s observation that Capital Metro’s annual report and other communication materials seemed curiously devoid of people. Influenced by the New-Deal-era Works Progress Administration, which sent out photographers to document life under the Great Depression, and by the popular blog Humans of New York, Capital Metro embarked on documenting the lives of its riders.

The photos and videos, often with accompanying quotes, appear on a Tumblr and on Capital Metro’s social media pages. The stories often veer from observations about commuting to broader observations of life in Austin, or on earth.

The photographers were asked to turn in a 60/40 mix: 60 percent of their work had to convey some aspect of the subject’s transit story, whether visually or through the text. The roughly two dozen photographers and videographers who took part in the project are all Austin-based, and turned in their work in three phases. Daniel Doggett, a documentary filmmaker, participated in the second round, which allowed him to respond to the work that had already been created for the project.

He decided to take more of a straight documentary approach. He approached transit riders until he’d met two subjects who were open to being followed for a period in their daily lives. One of his videos features Marshall, who moved to Austin from Northern Virginia, where he had been commuting about 100 miles a day. In Austin, he moved across the street from his workplace and sold his car. In Doggett’s video, Marshall is seen loading his bike onto the front of a Capital Metro bus.

Talking to transit riders, Doggett — who rides transit himself when he can — says he was surprised by how convenient the system was for people. “Austin is increasingly congested, but these folks choose to ride transit for environmental reasons, for ease of use, cost,” he says. “I was surprised by how much they enjoyed it.”

In addition to humanizing transit, Peck says the project was intended to increase engagement with Capital Metro’s social media. Compared to peer projects — like a recent human-interest video campaign by Kleenex — the Austin Collective is generating roughly twice the number of click-throughs and a decent amount of discussion. Social media is meant to generate connections, says Peck, “but often on commercial or business sites it’s a one-way conversation, and we wanted more of a two-way conversation.”

So far, it seems to be working. Peck says a less quantifiable measure of the project’s success has been the ratio of negative to positive comments. “We were getting a ton of negative comments, just general negative blanket comments before,” she says. “Now people seem to feel the need to say positive things randomly more often.”

All 200 pieces of content will go online by the end of January.