What Worked About Atlantic City’s Big Stalling Tactic – Next City 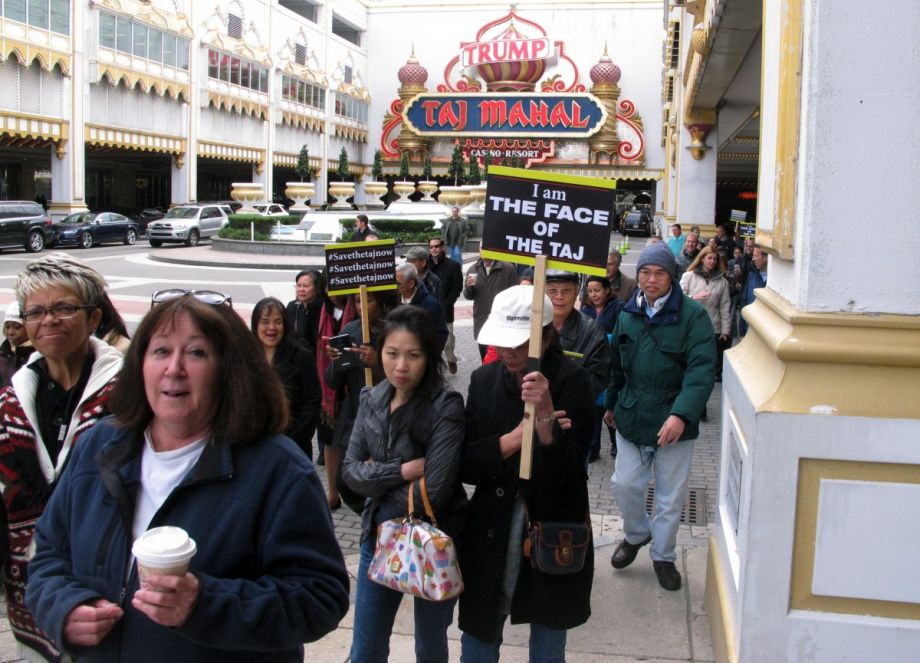 “I truly want to cry. I see so many families that are being ripped apart now.” That’s what an Atlantic City cocktail waitress, on the eve of Revel casino’s closing in September, told Philadelphia magazine. In July, with the Showboat’s closure looming, a casino bartender told the Philadelphia Inquirer, “The prospect of me and my wife both losing our jobs is horrible.” He met his wife, a cocktail waitress, at work.

There have been countless profiles of Atlantic City’s decline this year. Four casinos have closed and this weekend another, Trump Taj Mahal, is likely to be shuttered as well. [UPDATE: The New York Post reports that there’s a deal in the works to save the casino.] Most of the coverage focuses on the very real failures of the resort town — the stubbornly high poverty rate, the shoddy urban planning and the folly of casino development more generally. But amid those failure stories, the successes of the now defunct Atlantic City casino monopoly often go unappreciated: The casino-hotel complexes and the city they reshaped supplied a lot of working-class people — that cocktail waitress, that bartender — with substantially better employment than what’s generally on offer in the Walmart economy.

During the late 1970s, while the high-paying unionized industrial economy began shuddering to a halt, the resort enjoyed its own little gambling monopoly in the populous mid-Atlantic region. Atlantic City essentially postponed its region’s reckoning with the postindustrial economy for 30 years. Unfortunately local and business elites emulated many of the sins committed by their national counterparts in earlier decades, including neglectful treatment of the city itself, along with its African-American population, and a total failure to prepare for the inevitable collapse of their economic order.

At its highest peak, the casino industry offered more than 50,000 jobs, although usually the number hovered around 45,000. Union casino workers (including housekeepers and waiters) make an average of $10,000 a year more than their unorganized counterparts, according to Clyde Barrow, director of the University of Massachusetts Dartmouth Center for Policy Analysis, and generally have stronger benefits and more control over scheduling. An employment cluster of that size is reminiscent of the industrial centers of old, where tens of thousands of workers were employed in sprawling factories and shipyards. While the macroeconomic benefits of casinos are dubious, they are certainly better for the local economy when the vast majority of gamblers come from outside the region as was the case in Atlantic City for decades.

“One of the success stories of the height of Atlantic City was the creation of a lot of jobs with union contracts that allowed people to live decent lives,” says Bryant Simon, history professor at Temple University and author of Boardwalk of Dreams: Atlantic City and the Fate of Urban America. “Whatever success Atlantic City has been able to produce has not been because of the casinos [alone], but because of workers ability to organize.”

Although profits and jobs have been falling since 2006, when Pennsylvania began competing with New Jersey in gaming, the job numbers have remained well above 30,000. As of July 2014, with the Atlantic Club already shuttered, casinos still provided jobs for more than 20 percent of Atlantic County’s employed labor force. This doesn’t even include tertiary employment such as construction jobs or small businesses catering to casino workers.

In comparison to more recent revitalization efforts in Wilmington, Delaware, and Camden, the casinos also employ a greater percentage of those city residents who have jobs. Atlantic City’s unemployment rate is higher than that of nearby Wilmington, but a significant proportion (51.7 percent) of its employed residents actually live and work in the city. In Wilmington, only 26.7 percent of its mostly working-class residents work inside the borders, a fairly common proportion for smaller postindustrial cities. In Camden, only 17.7 percent of its residents were employed in the city — despite the growing number of jobs available in its eds and meds sector and along the riverfront.

The contrast with Camden is noticeable when you walk around Atlantic City outside the casinos too. Many of the buildings are decrepit and its avenues dotted with vacant storefronts, but only a few neighborhoods have the vacancy rates that mar Camden and Chester, Pa., home to Harrah’s casino since 2007. A.C. casinos have attracted immigrants from Central and South America, India, Vietnam and Africa who make the city one of the most diverse corners of New Jersey.

But this outcome did not result from conscientious planning or economic vision on the part of local political elites or the casino industry.

The city’s African-American population was largely left out of the casino boom, just as they were too often kept apart from the postwar industrial economic order. Part of the problem can be linked back to the old anti-Mafia provisions of the New Jersey Casino Control Act, which prohibit anyone with a felony conviction from working most casino jobs. Because African-American men receive a disproportionate amount of law enforcement’s attentions, many are arrested and charged and cannot work in the industry.

And local leaders didn’t do much of anything to make Atlantic City a nicer place to live (or visit) and instead blithely allowed its middle-class to continue trickling away. The vast majority of casino employees live elsewhere in Atlantic County — 81.7 percent of the jobs in Atlantic City are held by those who live beyond its borders, and the city contains more jobs than residents (at least before this year’s casino closings).

In Census data collected between 2009 and 2013 Atlantic City’s poverty rate was a staggering 31.4 percent. With four casinos closures in 2014, the Trump Taj Mahal could cross off another 3,000 jobs. The ripple effects are already being felt. Just as boom times saw better employment outside of the casinos, the downfall’s impact reaches far beyond the boardwalk. Simon reports that the used car and truck dealership his family operates outside the city is already laying workers off. The old Showboat is being repurposed as a dormitory for Richard Stockton College, which is nice but hardly a replacement for what is being lost.

Atlantic City’s monopoly collapsed years ago, but 2014 is the year the city finally reckoned with it and rejoined the rest of America’s postindustrial economy. The shoddy planning and concentrated poverty shouldn’t be forgotten, but neither should the fact that a unionized industry provided tens of thousands of job with family-sustaining wages and benefits (many going to immigrants). In the postindustrial economy, few other institutions can boast the same.