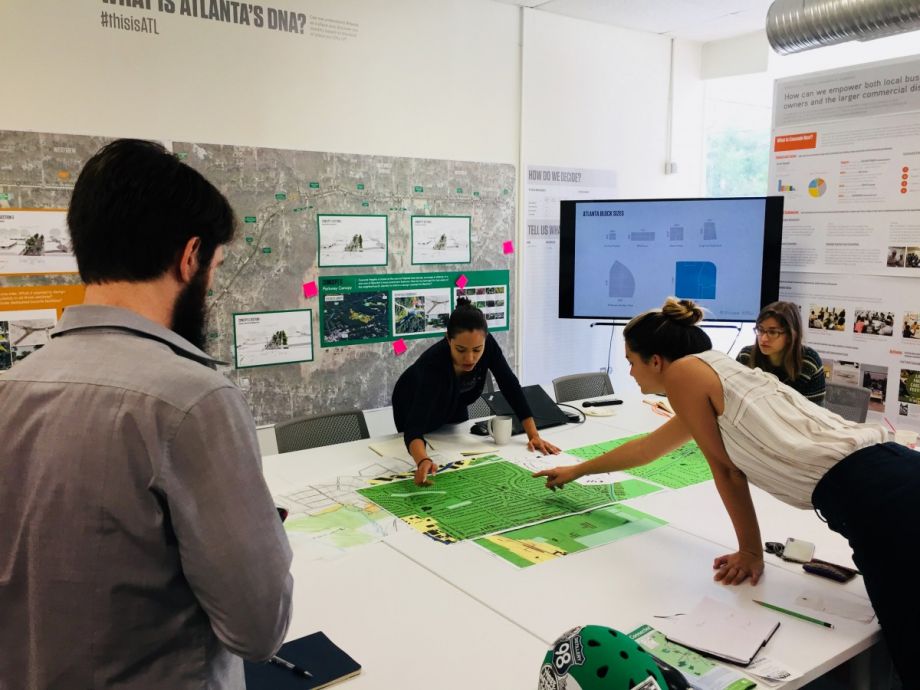 On a weekday afternoon in southwest Atlanta, passersby round a street corner and walk by a windowed storefront. Perhaps they catch a glimpse inside of the aerial map of Atlanta, covered in sun-faded sticky notes. Or maybe they see people working and talking at desks.

Either way, the City of Atlanta hopes these passersby open the door.

Atlanta City Studio is a pop-up storefront meant to involve the public in the urban design process. Operated by the city’s Department of City Planning, the pop-up invites anyone to walk in, talk with the city’s urban designers and collaborate on ideas for projects. City staff are there to answer questions and give the public a way to get their ideas for improving their neighborhoods in front of the right people. Oh, and if you have a question about a broken water meter or a pothole, the studio can help you with that, too.

“We knew that [the studio] would draw a lot of resources that we needed and it would also shine a light on the neighborhood,” says Corliss Claire, secretary and founding member of the community development corporation. “Development is coming in this direction, but we want to make certain that we stay on top of it.”

Cascade Heights is one of the last areas near downtown Atlanta that has swaths of available land for development. Claire, who has lived in Cascade Heights since 2002, says this is a critical moment to help guide future growth while preserving the neighborhood’s character.

So in April 2017, the studio opened in Cascade Heights. It has six full-time staff members and one fellowship student.

“They’ve become an essential part of the community,” Claire says.

The studio began by listening to residents and learning what they had already accomplished and what they wanted for the future. “We put their work on up the walls alongside city designs and tried to tease out what those projects were,” says Kevin Bacon, director of Atlanta City Studio.

Six months into its tenure there, the studio identified projects to work on in Cascade Heights. This has included making Beecher Street, a major connection, more walkable, and working with the community to design and build a custom bus shelter that has real-time bus signage and landscaped planters. Ideas came from the CDC and others in the community.

The studio brings its own expertise as well. CDC asked the studio to hold a session with business property owners about how to improve their storefronts, Claire says. It went beyond that. The studio ended up offering a matching grant program, giving eligible property owners up to $20,000 for facade improvements. By the time the program finished in summer 2018, five businesses had received the storefront redesign grant, and the city has launched a similar grant program in the West End neighborhood.

In addition to speaking with the public about design projects, the studio has recurring events every month to engage people: a book club, a lunchtime forum and a morning discussion over doughnuts. People and groups can also use the studio space for meetings.

The studio is not only a public-facing design arm. It also represents the city as a whole. A staff member is always on duty to answer any questions, even if they aren’t design-related. “If this is your first touchpoint with city government, we want it to be a really good experience and point you in the right direction,” says Sonia Sequeira, the studio’s manager of community engagement.

Atlanta City Studio’s more than two years in Cascade Heights is coming to an end as it moves to another part of the city. Though some Cascade Heights projects have finished, others are still in progress. The studio worked on the design of the Beecher Street walkability project, and the next step is to find funding. It will continue its support of the project even after leaving the neighborhood.

Another project has envisioned how to bring additional housing to the business quarter. The studio has coached the CDC on how to promote this vision going forward.

“We would never have been able to solidify our ideas and our visions for the future for the business quarter and also for the immediately surrounding neighborhood without the resources that the studio has,” Claire says. “[For] a government entity, I don’t usually have these kinds of glowing praises.”

She adds that a community of color is not one that normally gets this kind of attention.

The next stop for Atlanta City Studio is south downtown, where it will open in late summer. Among the most notable development coming is Centennial Yards, a 40-acre, mixed-use mini city within downtown.

Bacon says designers can play a role in shaping change coming to that area.

“When you look at south downtown, among a lot of the other places that you could make arguments for, everything that’s about to happen right there just begs having us in the middle of it to be a shaping force.”