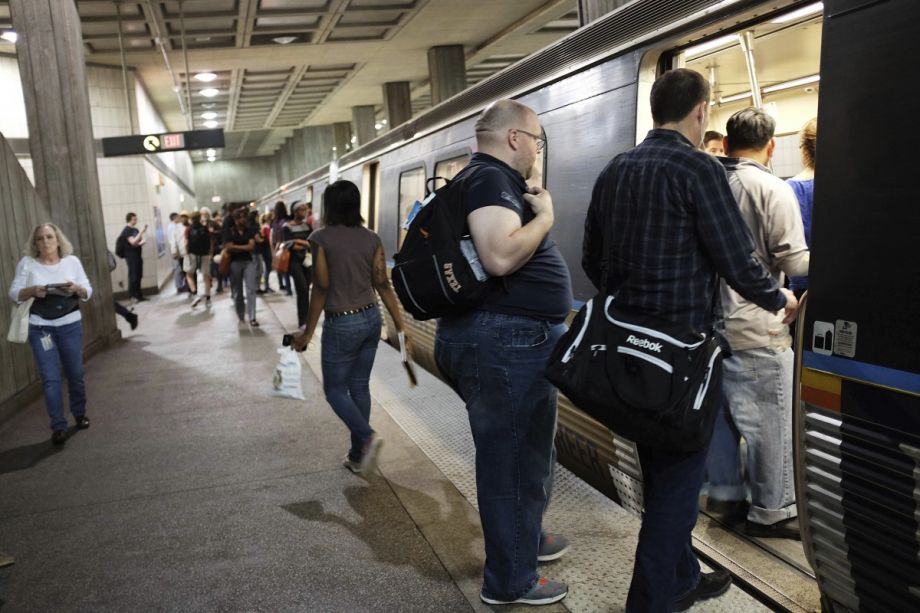 Passengers board a MARTA train during the evening rush hour in Atlanta, on March 31. (AP Photo/David Goldman)

Overpass Collapse Sends Commuters Streaming Onto Public Transit
Thousands of Atlanta-area commuters are getting their first taste of using mass transit thanks to a fire that caused an overpass on a key central Atlanta freeway to collapse March 30, forcing the closure of the road for what’s expected to be months.

More than 50 volunteers from the grassroots advocacy group MARTA Army showed up at rail stations Monday to help first-time riders learn how to use the system.

“As they say, MARTA is smarter,” longtime rider Raheem Franklin told WSB-TV reporter Rikki Klaus. “I just was trying to show a lady how to reload her Breeze card just a second ago, so it’s just about learning the schedule, learning the routes, learning how to load your cards.”

The volunteers were also on hand at nine MARTA rapid transit stations on Tuesday to provide assistance.

“I think that this bridge collapse is an opportunity to see that relying solely on road infrastructure is not resilient,” MARTA Army Executive Director Simon Berrebi said.

Feds Pick Replacement for Amtrak Bottleneck
The Federal Railroad Administration has reached a decision on what should replace one of the worst choke points on Amtrak’s Northeast Corridor, Railway Track and Structures reports.

In this 2015 photo, an Amtrak train emerges from the Baltimore and Potomac Tunnel in Baltimore. (AP Photo/Patrick Semansky)

The project would include three ventilation shafts, one at each portal and one midway through the tunnels, and measures to mitigate the project’s impact on surrounding neighborhoods in West Baltimore both during construction and once the tunnels enter service.

Amtrak owns the current tunnels, through which Maryland Area Regional Commuter (MARC) and Norfolk Southern freight trains also operate. All three services would share use of the new tunnels as well.

The estimated cost is $4.2 billion. Sources of funds for their construction have yet to be identified.

Two Berlin U-Bahn Lines Finally Become One
It will take another three years for all the finishing touches to be applied, but the hard part of Germany’s newest unification project is complete.

Global Rail News reports that Berlin’s mass transit agency, BVG, celebrated the completion of two 1-km (0.62-mile) tunnels that will connect Lines U5 and U55 on March 22 when the tunnel boring machines broke through to Brandenburger Tor (Brandenburg Gate) station on Line U55.

Line U55 had been planned as an extension of Line U5 westward from Alexanderplatz. Work on the extension began in the late 1990s, but the project was put on hold and the completed segment opened as a standalone line in 2009. Line U55 runs from the main railroad station, Berlin Hauptbahnhof, east to Brandenburg Gate via Reichstag station.

The new connecting subway will have three intermediate stations at Unter den Linden, Museumsinsel and Berlin Rathaus (Berlin City Hall). Most of the tunnel was excavated with tunnel boring machines, but a short segment incorporates an existing turnaround loop tunnel on Line U5 west of Alexanderplatz. The finished U5 tunnel will open for service in 2020.