As Seattle Seeks to Tax Amazon (Again), What Can It Learn From California? – Next City

As Seattle Seeks to Tax Amazon (Again), What Can It Learn From California? 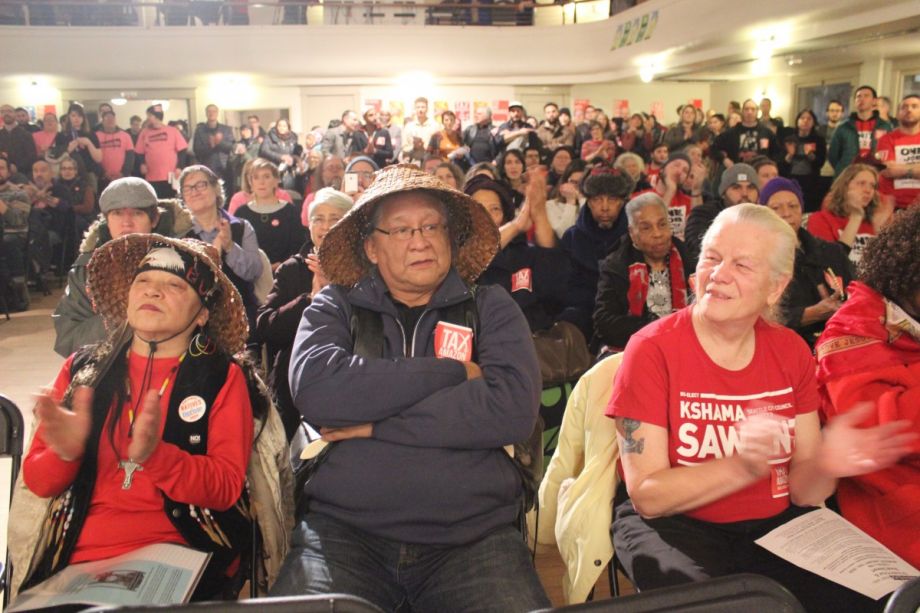 Supporters of Seattle City Councilmember Kshama Sawant and of a tax on big businesses like Amazon gather for a rally announcing the campaign to “Tax Amazon 2.0.” (Photo by Greg Scruggs)

On a frigid Monday night in January, fiery speeches about Amazon’s perceived tax avoidance and poor labor practices warmed up a capacity crowd in Seattle’s Washington Hall at the launch of a new campaign to tax the tech giant to pay for affordable housing, homeless services, and Seattle’s Green New Deal — rehashing a bruising political fight from 2018 that captured national attention about the symbiotic yet fractious relationship between city government and powerful corporations.

From socialist politicians to union organizers, the speakers echoed their 20th century forebears who barnstormed for political causes in the historic fraternal lodge. Today’s rabble rousers are eager to translate recent city council election momentum into a grassroots movement to tax Amazon. The ongoing battle to raise and spend revenue for similar needs in San Francisco offers a mirror for how Seattle might proceed as campaign backers start drafting a new tax proposal this weekend.

In May 2018, the Seattle City Council passed a $275 per-employee tax on companies grossing over $20 million annually. City analysts expected the progressive tax to raise about $47 million annually for affordable housing and homeless services - Seattle declared a civil state of emergency on homelessness in 2015 — from roughly 3 percent of Seattle’s businesses. The total amount was a compromise after Amazon threatened to slow down its growth in the city.

Although a city-appointed progressive revenue task force proposed the so-called “employee hours tax,” socialist city councilmember Kshama Sawant branded the policy as the “Amazon Tax” and led rallies outside the Amazon Spheres. After passage, a coalition of businesses affected by the tax — including Amazon — mounted a referendum campaign. With unfavorable polling numbers, the council preemptively repealed the tax in June 2018, their voices in the city council chamber drowned out by activists chanting “We are ready to fight / Housing is a human right.”

That same chant reverberated in Washington Hall earlier this month. 18 months after progressives lost their first effort to tax big business for housing, some version of the Amazon tax is back on the table. How?

Second, Amazon donated a record-breaking $1.5 million to a chamber of commerce PAC in an effort to flip the city council in last November’s election. Their gambit backfired dramatically, with only two of seven candidates endorsed by the chamber winning their races. The election was widely seen as, in part, a de facto referendum on the head tax — and Sawant, the policy’s most vocal proponent, won a hotly contested race.

That combination of events fuels Sawant’s effort to resurrect some form of a progressive tax on big business. An appearance at the rally by Seattle city attorney Pete Holmes — who declined to speak on stage — suggests that the city bureaucracy is willing to defend an eventual law against legal challenges.

What form that new tax will take, and how it will become law, are open questions that will assume center stage January 25 for an “action conference” where progressive thinkers, labor organizers, and renters’ rights activists will convene to hash out a proposal in a messy act of grassroots democratic sausage making.

Thus far, Sawant’s only public commitments are that the tax should be bigger than 2018’s compromise — totaling at least $300-$500 million per year, she said in a press conference — and that while she will propose city council legislation, the social movement backing the tax will also pursue a ballot initiative. Confidence that Seattle voters would approve a head tax is a 180-degree turn from the political calculations of June 2018.

While Sawant was mum on the specific mechanisms of the tax, other than insisting it would tax big business and not workers or small businesses, she did signal a willingness to learn from Seattle’s peers. “Movements are learning from one another. What we have learned is that what we do inspires working people elsewhere and when working people win victories based on inspiration from us, we have to take that inspiration back on our shoulders and win something here,” she told Next City. “If San Francisco can do it, so can we.”

San Francisco “did it” by pursuing a radically inclusive process to build a movement, keeping the measure straightforward, offering a detailed spending plan, and meeting with business leaders to craft compromises.

“It was important that they had a coalition and that people like [Salesforce CEO] Marc Benioff and other business leaders participated in the campaign and showed that it was not that all business was going to oppose all business taxes,” Kristy Wang, community planning policy director for Bay Area’s urbanism think tank SPUR, told Next City.

No Seattle-area business leader of any stature — much less a Benioff-like figure — publicly supported the 2018 head tax. Given the intense business-backed opposition to the head tax, imagining Microsoft’s Brad Smith or Starbucks’ Kevin Johnson endorsing a hypothetical Seattle sounds like pure fantasy, especially when Sawant said on election night, “It is not about inviting the billionaires to the table, because for God’s sakes they own the whole goddamn table.”

But long before Seattle’s new tax proponents will have to decide whether or not to meet with the chamber of commerce, they must come up with a vision.

“We’re not claiming to end homelessness,” Prop C’s principal architect Jennifer Friedenbach, executive director of San Francisco’s Coalition on Homelessness, told Next City. “We wanted to do something big and bold but we wanted it to be doable.”

Like Seattle is starting this weekend, the San Francisco initiative draft did not come out of a smoke-filled room. Friedenbach described exhaustive consultations with housing providers, policymakers, and city department staff. The coalition submitted FOIA requests to acquire background data on the unmet need for housing, mental and behavioral health services, shelters, and eviction prevention.

When it came time to design Prop C, the coalition kept the math and the messaging simple. One-half percent on gross receipts after the first $50 million, with 50 percent going toward housing, were round numbers that resonated with the public. While the class warfare language of the slogan “tax the rich, house the poor” stirred up animosity from the city’s tech elite, it ultimately galvanized popular support, as Seattle’s rallying cries seem to do as well.

“We tried to make it really impossible to fight against — it only kicks in after $50 million, half a percent — while making it really cleanly progressive,” Friedenbach said. Where Seattle faced pushback from high-overhead businesses like grocery stores that feel they were unfairly targeted alongside tech companies, Friedenbach has a simple solution to neutralize the opposition: “Just exempt them.”

In San Francisco, a detailed spending plan describing how the revenue would scale up existing city programs, from financing affordable housing to treating drug addictions, helped silence critics and bring on endorsements, from urbanism think tank SPUR to the feisty older homeowners that make up the Coalition for San Francisco Neighborhoods to influential Chinese-American groups — with 800 Chinatown families living in single-room occupancy apartments, inadequate housing cuts across the city’s demographics.

“The biggest thing we’re up against is this sense that the issue can’t be solved,” Friedenbach said. “If you can demonstrate this can be solved and this is how you do it, that goes a long way toward inspiring a level of trust and people can take a chance on it.”

That kind of messaging has been an uphill battle for Seattle, where 2018 head tax critics alternatively derided a perceived lack of a spending plan, balked at the plan that was presented, and doubted the city’s ability to spend new revenue efficiently. (Next City’s reporting showed that demand from affordable housing developers for shovel-ready projects in 2018 far outstripped supply, which the head tax could have supplemented. The city’s Office of Housing did not respond to a request for comment about 2019 housing funding.)

With Prop C held up in court, the city has collected the money but not yet spent it, so the jury is still out on the initiative’s efficacy.

While Seattle has its fair share of skeptics that any public action beyond stricter enforcement can make a dent in homelessness, the numbers are encouraging. From 2018 to 2019, the metro area’s homeless population decreased for the first time in seven years, suggesting that something is working. For one, the city appears to be on board with permanent supportive housing. A new civic alliance favoring that approach, calling itself the Third Door Coalition, arose from the ashes of the head tax debate. In August, the mayor and city council took advantage of a new Washington state law allowing the city to retain a portion of sales tax for affordable housing and announced a $50 million investment. Last week, one of the city’s leading affordable housing developers broke ground on 91 new units of permanently supportive housing on a city-owned parcel backed with city dollars.

If Seattle’s homeless tax proponents wish to follow San Francisco’s lead, they will have to hold up these ongoing efforts as proof that public investment delivers results.