As Long as We Don’t Fall off the Fiscal Cliff, 2013 Will Be a Good Year for Transit – Next City

As Long as We Don’t Fall off the Fiscal Cliff, 2013 Will Be a Good Year for Transit 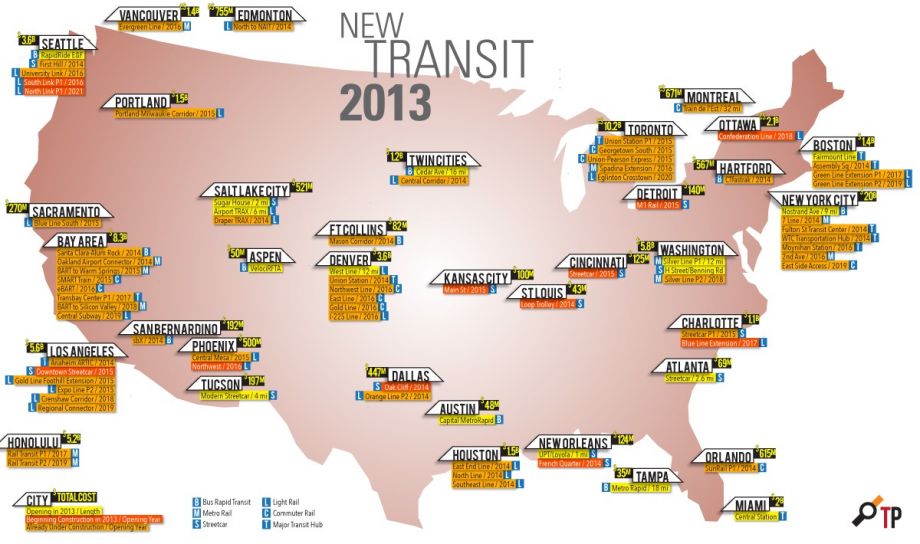 New Transit projects are all over the map in 2013. Illustration by Yonah Freemark

2013 will be a big year for the U.S. public transit system. This year, more than $64.3 billion worth of transit expansion projects will begin construction, continue construction, or enter into service in the United States. It’s a huge investment, much of it the product of extensive state and local spending.

What is evident is that certain cities are investing far more than others. Among American cities, Denver, Honolulu, Houston, Los Angeles, New York, San Francisco, Seattle, and Washington stand out as regions that are currently investing particularly dramatically. Toronto has the biggest investments under way in Canada. These metropolitan areas have invested billions of local dollars in interconnected transit projects that will aid in the creation of more livable, multimodal environments.

Yet the federal government also continues to sponsor a number of these investments, contributing half and sometimes more of many of the projects’ costs. Washington’s involvement should not be downplayed. Especially not now.

The just-inked bipartisan compromise to head off the fiscal cliff will spare transportation funding in the short term. But an 8 percent reduction in federal discretionary spending (the “sequester”) — a threat that has yet to be neutralized — remains official policy and will be enforced on March 1 if no compromise is reached. That 8 percent cutback would reduce funding for the New Starts program that funds most major new transit expansion projects by $156 million in 2013 alone. Payments to the Transportation Trust Fund, which provides funding for transit maintenance programs and the purchase of new buses and trains (as well as money for highway projects), will decline by $471 million in the same period.

This is no phantom menace. Congressional Republicans in the U.S. House have demonstrated a deep-seeded desire to cut federal spending. The Obama Administration and Democrats in the Senate have shown themselves willing to compromise to a significant extent, and transportation is unlikely to be spared. The result could be significant cutbacks in funding — cutbacks that states and cities are unlikely to make up with their own revenues. Investments from Washington make transit expansion possible.

Twin Cities Cedar Avenue Bus Rapid Transit— A 16-mile Bus Rapid Transit opening in the Spring from 28th Avenue Station and Mall of America in Bloomington to 215th Street in Lakeville, via Eagan and Apple Valley.

Cincinnati Downtown Streetcar — A 2-mile streetcar opening in 2015 from Over-the-Rhine to Riverfront.

Los Angeles Downtown Streetcar— A streetcar line opening in 2015 in a loop from Civic Center to Fashion District and Staples Center, via Financial District.

New Orleans French Quarter Expansion Project— A 2.5-mile streetcar opening in 2015 from Canal Street in the French Quarter to Esplanade Avenue in the Marigny.

Ottawa Confederation Line — A light rail opening in May 2018 from Tunney’s Pasture to Blair, via downtown Ottawa.

Seattle North Link — A 4.3-mile light rail opening in 2021 from Brooklyn to Northgate.