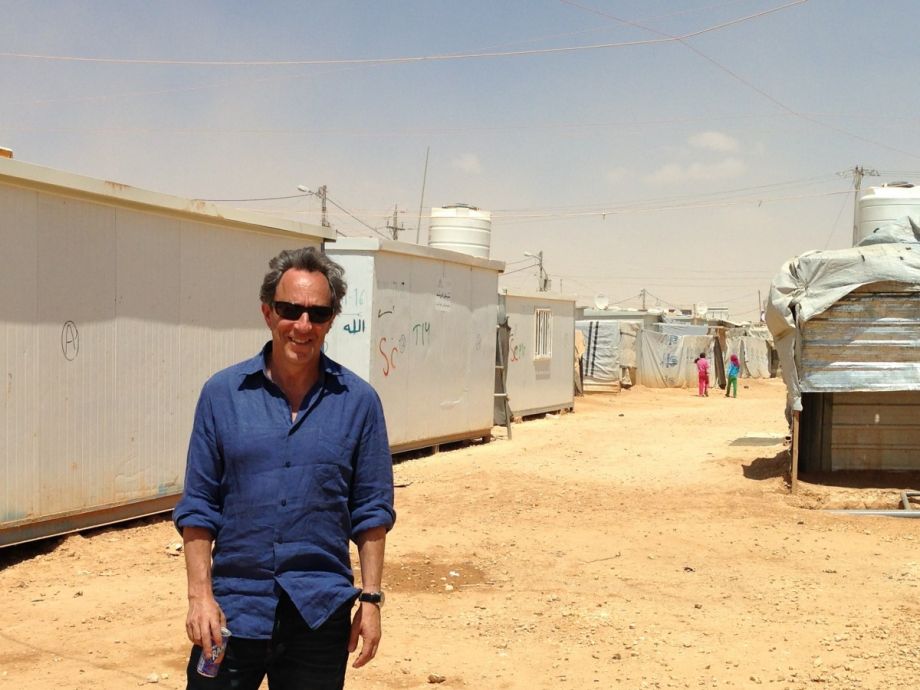 New York Times architecture critic Michael Kimmelman in Zaatari, which is home to thousands of Syrian refugees in Jordan

Next week, New York Times architecture critic Michael Kimmelman will moderate the Times’ Cities for Tomorrow conference. The event (Next City is a media partner) will feature urban experts from across the country in conversation about the future of cities. I spoke to Kimmelman about his experiences in the Middle East, resilience and the innate human impulse to urbanize.

You will be moderating a panel about cities like Zaatari, a very large, fast-growing makeshift city that was created by the UN to shelter refugees during the Syrian conflict. Are there lessons that NYC can learn from Zaatari?
I was in Zaatari last year. One of the really remarkable things about it is that for a while it was the most godforsaken spot on earth. But within a year or two, it became a kind of thriving city. I say “kind of” because, as a refugee camp, it’s still populated by people who don’t want to be there. People are there because they have no place else to go. But these people had made Zaatari into the city that they wanted it to be by dint of sheer inventiveness and will. They were motivated by what I believe is a basic human desire to urbanize. And that’s probably the most powerful lesson for New York about Zaatari. It’s also a lesson that is important for cities and refugee camps everywhere. Zaatari showed that people wanted to be in neighborhoods, with commercial streets and homes that were grouped along streets with sidewalks and electricity and basic services. People wanted to create a sense of shared urban life that felt normal. That sense of urbanization as a humane and basic way of living is very powerfully demonstrated there. I mean, these people had been farmers. They didn’t necessarily come from cities. But they saw that this was a place that could become a kind of pop-up city. So, it’s not a perfect place. But it’s also very far from what it had been when it opened, which was chaotic and violent.

So all these social organizations sprung up organically?
Yeah. You had a pizza parlor that delivered pizzas, which shocked even the people who ran Zaatari, because they had no address system. They had a travel agency to arrange visits by people to Zaatari, even though technically no one was allowed to come or go from the camp. It had bridal shops and flower shops and barber shops and supermarkets and rotisserie chicken places. You know, it had the signs of normalcy, which created a home for people who were homeless.

Was there a small group of organizers?
It was extremely anarchic in the beginning, and there was a lot of corruption and gangs, and all these changes were technically illegal. But what happened was that the people who ran the camp came to realize that they could work with the gangs and others who were bringing in illegal materials or stealing electricity in order to create a better situation for everybody. And so, the guy who ran the camp, instead of somebody in charge of a massive emergency relief site, became a kind of mayor, of a spontaneous city. So a form of governance began to replace what had been the chaos and anarchy at the beginning.

You’ve reported on hundreds of ambitious development projects over the years. Is there one project in particular that you think speaks to where cities are heading?
Not exactly. I think lots of different projects are remarkable because they are specific to the places where they exist. What I do find useful, though, is to look for examples of places that can provide overall schemes for developing cities as instructive examples of smart design, equitable neighborhoods and so forth. I do find this desire of people to make cities for themselves — a kind of basic, internal understanding of cities — very moving. I remember, in Cairo, when there was no government in operation after the fall of Mubarak, a lot of people were taking urban improvements into their own hands. And in one neighborhood, which had been bypassed, there was ring road that fed into downtown where there were jobs. A community literally just decided to build their own on/offramp to the highway. Sort of do-it-yourself infrastructure. So I thought that was a kind of cool, if jury-rigged, example, of instructive development.

Urban resilience is a major theme at this year’s conference. In your view, what does a resilient city look like?
I think resilience is about more than just green buildings and soft edges to waterfronts. I think truly resilient cities have to be economically resilient and socially resilient. Resilience can’t just be about environmental concerns, because in the end all these things are linked. So to me, a resilient city is one that’s equitable enough that people of different income levels can live together, with a robust transit infrastructure that serves those people, and a healthy network of public spaces, parks, and sidewalks. A resilient city should deal with issues like public health as well as environmental concerns. And of course, it should pay attention to the large-scale environmental challenges that we face. We should not simply respond to environmental calamities after they happen, but prepare for and design for them. This is what cities do in a place like Holland or the Netherlands, where resilience is married with economic and urban innovation. And there’s no reason why we should not be able to do that too.