Why U.S. Cities Are Fighting to Attract Immigrants – Next City

Why U.S. Cities Are Fighting to Attract Immigrants 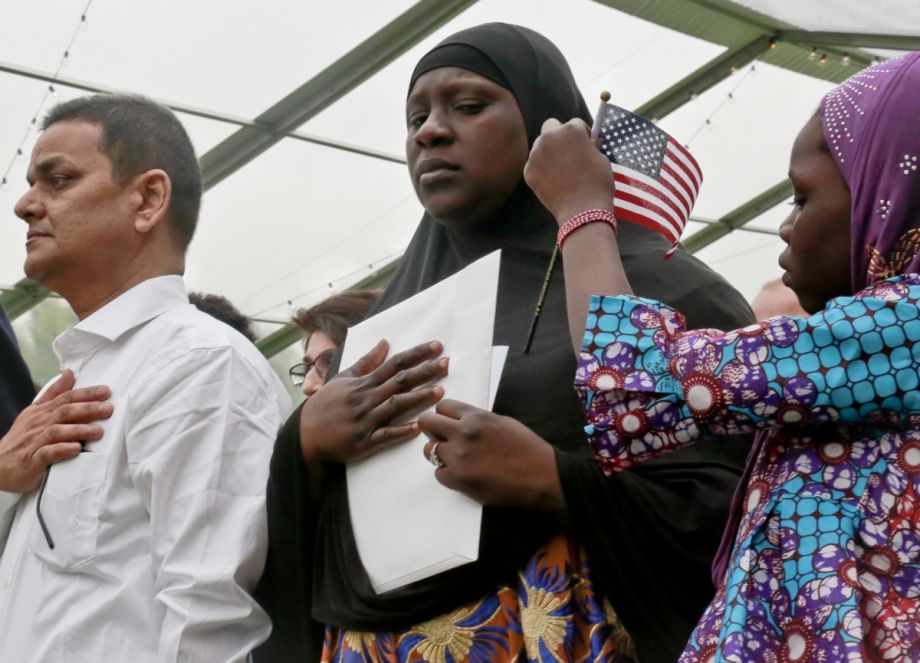 Fatoumata Jangana, center, stands for the National Anthem as her daughter Fatoumata, 11, fixes a miniature flag onto her hijab, during U.S. Citizen and Immigration Services ceremony for new citizens. (AP Photo/Bebeto Matthews)

Backyard barbecues. Fireworks. A day off work. Among these traditions we look forward to on the Fourth of July, there is an even more patriotic rite of passage: the oath immigrants take to become American citizens.

The naturalization ceremony opens up a world of benefits for immigrants, but the advantages may be even bigger for cities and counties. Helping immigrants pursue naturalization is a boon for municipalities, allowing them to reap millions more in tax revenues from the higher economic gains that citizenship brings, and in turn put that tax revenue to use in improving public services.

On average, citizens earn more and have higher rates of employment and homeownership. After naturalizing, for example, individual earnings rise by an average of 8 percent, or $3,200. A 2015 Urban Institute report showed that if all individuals eligible to naturalize in 21 American metro areas were to become citizens, they would generate an additional $2 billion in annual revenue.

In recent years, more cities than ever have embraced programs to promote citizenship, spurred in part by an innovative program called Cities for Citizenship. The program was formed in 2014 by the mayors from New York City, Los Angeles and Chicago, in partnership with the Center for Popular Democracy, the National Partnership for New Americans, and Citi Community Development. It provides financial education workshops, fee waiver applications and citizenship info sessions at local libraries in 35 cities around the country.

Interest in the program has surged. Since C4C’s start in 2014, nearly 40 cities have joined the program — and a recent report on the program showed nearly twenty joined in just the past year and a half, nearly doubling the total number of cities committed to promoting citizenship. The list includes cities in the heartland such as Dayton, Ohio, and Louisville, Kentucky, underlining that citizenship bridges the partisan gap.

Cities’ enthusiasm for citizenship reflects growing national interest in citizenship. More than 970,000 people applied to become citizens in 2016, a startling 24 percent increase over 2015. While presidential election years usually feature an uptick in naturalization applications, the 2016 spike was nearly 10 percent higher than 2012. And in just the first half of this year, nearly 530,000 people have applied for citizenship. Those numbers are unprecedented — the highest in at least a decade.

Citizenship in turn translates to significant city, state and federal tax revenues that can go toward social services and public investment. In fact, a 2015 Urban Institute report showed that if all individuals eligible to naturalize in America’s 20 biggest metro areas were to become citizens, they would generate an additional $2 billion in annual revenue.

The involvement of mayors is badly needed, as naturalization rates still lag far behind what they could be. Every year, less than 9 percent of the nearly 9 million green card holders who are eligible to naturalize actually become U.S. citizens, often discouraged by a host of financial and logistical obstacles standing in the way. A prospective citizen must complete a 21-page application, submit fingerprints, pass a written and oral exam in English on American history and civics, and pay a sizable fee before finally pledging their allegiance to our flag. Many must do so in a language they are unfamiliar with, in between juggling jobs and family responsibilities.

It is encouraging to see communities stepping up to break down these barriers and give all Americans who are eligible the chance to naturalize. Given the benefits for cities — and the overwhelming concentration of immigrants in metropolitan areas — it makes sense that mayors have led the way.

The momentum is only growing. A national campaign called Naturalize NOW! is aiming to secure another million citizenship applications in 2017. The campaign, which works in partnership with labor unions, statewide immigrant rights organizations, and service providers, has already held more than a hundred workshops and educational events in May and the beginning of June.

As communities come together in unprecedented ways to encourage all those eligible to naturalize, their efforts have the potential to boost local economies, lift up millions of families across the country, and upend the political landscape.

Tara Raghuveer is the deputy director of the National Partnership for New Americans.