In This N.C. Town, a Model for Rebuilding Is Taking Shape – Next City

In This N.C. Town, a Model for Rebuilding Is Taking Shape 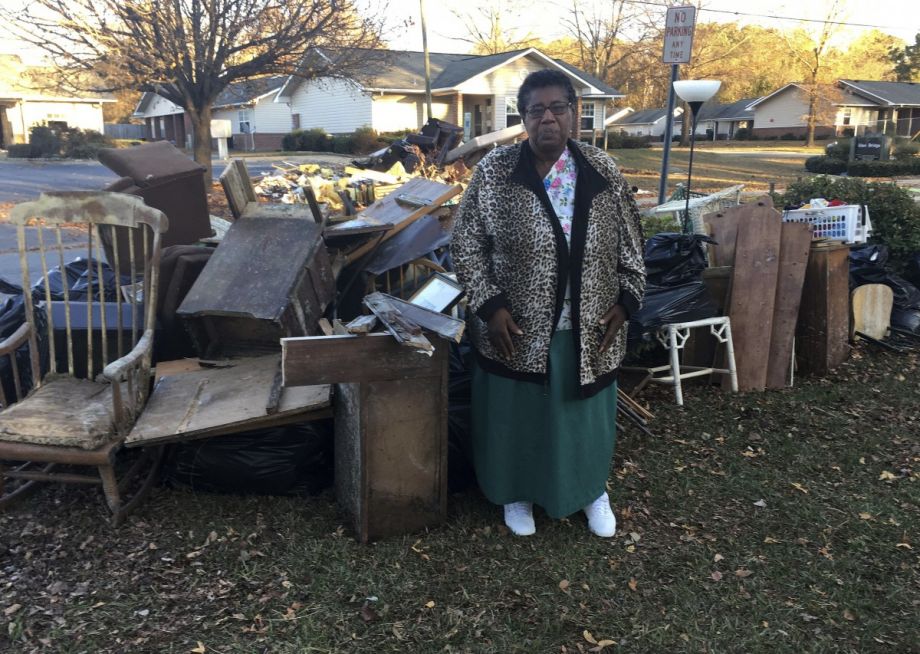 In this Dec. 1, 2016, file photo, Dianne Hines stands in front of furniture and other belongings pulled from her home after Hurricane Matthew, in Princeville, North Carolina. (AP Photo/Martha Waggoner, File)

As Hurricane Harvey made landfall in Texas in late August, a group of architects, landscape architects, designers, emergency management professionals, first responders and community members huddled into a county administration building to talk hurricane recovery. The group wasn’t in Houston — they were more than 1,000 miles away, in Princeville, North Carolina. In 2016, floods that followed Hurricane Matthew devastated the small town, and the designers and residents were gathered for a five-day workshop on strengthening Princeville’s resiliency in the face of future storms, both through infrastructure changes and economic development.

The timing was coincidental, but the news coming out of Texas was another reminder of how critical their work was. The people in Princeville are well aware of the impacts of a hurricane, and what happens after the national television cameras turn away.

Established by freed slaves in 1885, Princeville is the oldest town in the U.S. incorporated by African-Americans. According to the 2010 census, its population is 96 percent black. Though it’s more than 100 miles inland from the coast, the town is built on low ground south of the Tar River. Flooding has been an unavoidable part of the town’s history. In 1999, flooding from Hurricane Floyd nearly destroyed it, but Princeville’s 2,000 residents rebuilt. Last summer, Matthew overwhelmed the watershed, the Tar River rose, and the town was once again devastated by flood waters.

“There is an acceptance that flooding was a part of life. People felt that we built it with our bare hands and we’ll rebuild it over and over. There’s a strong attachment to place, a strong sense of community,” says Kofi Boone, associate professor of landscape architecture at North Carolina State University and one of the lead organizers of the August workshop.

Princeville was one of six communities selected for the Hurricane Matthew Disaster Recovery and Resilience Initiative, an effort of the U.S. Department of Homeland Security’s Coastal Resilience Center, which is housed at the University of North Carolina. Researchers there are studying the impacts of Matthew, advising North Carolina emergency management services, and helping communities plan for future disaster recovery.

The August workshop, which Gavin Smith, a UNC professor and head of the Coastal Resilience Center, and Andrew Fox, an NC State landscape architecture professor, helped Boone to lead, grew out of that work. They brought together a diverse group of experts and community members to tackle the question of how to prepare for the next major storm.

In addition to many Princeville residents, the workshop also included experts on African-American history and heritage, federal agencies such as the Environmental Protection Agency and the National Park Service, and state representatives.

“It was pretty clear to us that a bunch of designers in a room by ourselves can dream up whatever we want, but it wouldn’t matter,” says Boone. “Being together with the agencies and emergency management folks, with them thinking about the logistical side of it, the government side of it, the policy implications, it made us react and respond more strategically. And they got to see that design isn’t just aesthetics, but really deals with the critical issues of health, safety and welfare. If I was ever asked to participate in a resiliency workshop again, I would make sure emergency management was not only in the room, but teammates.”

The event was held across the river from Princeville, in the town of Tarboro, because there was nowhere in the still-recovering Princeville that could host it. Over five days, the group tackled a few key questions: What can be done with a 52-acre parcel of land on the edge of town outside the floodplain? What should be done with infrastructure in town to better weather flooding? How can the town’s economy be bolstered?

The state is considering purchasing the 52 acres and incorporating it into Princeville. The land is at a high enough elevation that it would’ve survived the flooding from Matthew. One of the near-term goals from the workshop is to move emergency services such as fire and public safety to that higher ground and to build a crisis center there to accommodate people from lower-lying areas during disasters.

One exercise in the workshop took a detailed look at how flooding affected different parts of Princeville. Though people assumed the whole town was equally at risk during flooding, Boone says some neighborhoods need to only raise their houses up about 3 or 4 feet to avoid major flood damage.

Of course, new and retrofitted infrastructure costs a lot of money, something the town of Princeville does not have much of. The population has shrunk in recent years as young people have left to seek jobs in more robust parts of the region.

Capitalizing on the town’s history and heritage could make a difference. There is a place on the Tar River just outside of town called Shiloh Landing where enslaved people from Virginia were delivered to North Carolina. Remnants of Princeville’s predecessor, an early settlement called Freedom Hill, are located nearby, also along the river. There are plans coming together to create a historic river walk with signage and infrastructure with the hope that it will spark a tourism economy.

That Princeville is so flood prone is also linked to racist history. “It’s the idea of racialized topography,” Boone explains. “A lot of researchers have confirmed that you can almost track race to altitude. In the South, the lowest-lying areas are predominantly African-American. The highest areas in many Southeast cities are predominantly white.”

As if to put a fine point on the necessity of the planning event in August, Hurricane Irma hit the Caribbean on the final day of the workshop. Given its low elevation and the likelihood of increasingly severe hurricanes and storms due to climate change, Princeville will almost certainly face more flooding. The resilience model forming there could not only protect residents there, but also help other cities.

“As we start to have to deal with climate adaptation more, one of the easy answers is ‘why don’t people just move?’” says Boone. “For one, if you had a map showing all the places affected by sea level rise or flooding from a 100-year storm, people would be amazed and horrified by how many millions would have to relocate. But also, place attachment is important. Specific, local cultural context is important. It’s not just a technical exercise of deploying the latest infrastructure. It’s about people being able to express why places matter to them and designers being creative to adapt not just the physical place, but adapt in a way that fits the way people see their community.”