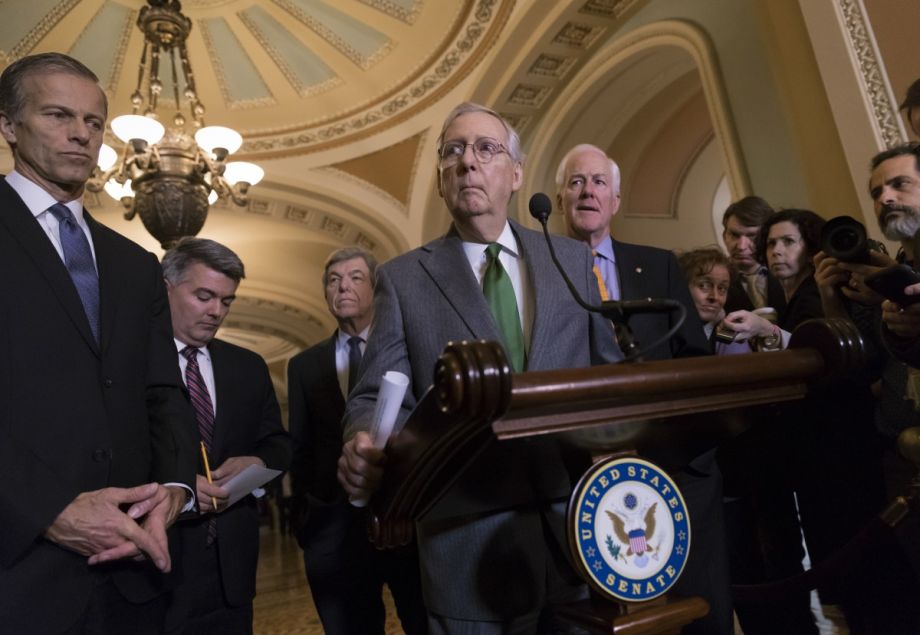 In the early morning hours of Dec. 2, the U.S. Senate passed a sweeping, hastily written tax bill that would massively transfer money from the middle class to corporations and the 1 percent, and add more than $1 trillion dollars to our federal deficit. Since the U.S. House of Representatives passed its own equally treacherous tax bill in mid-November, the two chambers are now meeting in conference to reconcile their bills and produce a combined bill for final passage within the next week.

We are in code red.

Congress is on the verge of passing legislation that would fundamentally harm low- and middle-income people and people of color across the country, particularly in high-cost cities and states like New Jersey, New York and California, endanger the future of bedrock government programs like Social Security and Medicare, and jeopardize our economy.

Together, these bills are an all-out assault on nearly all programs that make-up our social safety net and promote economic mobility in the U.S., but particularly in healthcare, housing, and education.

The Senate’s version of the tax bill includes a back-door repeal of the Affordable Care Act (or Obamacare), because it repeals the individual mandate to have health insurance — an essential part of our healthcare markets that enables insurance companies to provide affordable coverage for everyone. The non-partisan Congressional Budget Office estimates that this would cause 13 million people to lose coverage and raise all of our insurance premiums by 10 percent over the next 10 years.

The House version of the bill would also eliminate the medical expense deduction that allows people who itemize their taxes to deduct medical expenses that exceed 10 percent of their income. Nearly 9 million Americans rely on this tax deduction, and they are disproportionately senior citizens and the parents of children with serious illnesses or disabilities.

The House bill would also severely undermine the Low Income Housing Tax Credit (LIHTC), which is the largest government program to support the construction or repair of affordable housing units across the country. Under this bill, the 4 percent tax credit relied on by over half of affordable housing developers annually would be gutted, because it would eliminate the tax-exempt status of private activity bonds — which are required for the 4 percent tax credit.

Over the next decade, this would lead to the loss of nearly 1 million affordable housing units at a time when we are experiencing a nationwide housing shortage. People living in high-cost states and cities around the country would be most impacted, because they already spend a disproportionately high percentage of their income on rent, even with the LIHTC program. This would also immediately stall the repair and construction of affordable homes in the hurricane-ravaged communities of Florida, Puerto Rico, Texas, and the U.S. Virgin Islands.

In addition to undermining access to healthcare and affordable housing, these tax bills also represent a grave threat to education and educational opportunity. At a time when the cost of higher education is increasingly out of reach and millions of Americans are struggling to pay their student loans, the House bill would repeal the student loan interest deduction. Over 12 million people currently take this deduction, which allows some taxpayers to lower their taxable income by $2,500 as they repay their loans. This would particularly hurt students and graduates of color, because they have more student loan debt — black graduates have on average twice the student loan debt of white graduates.

The House bill would treat tuition waivers — which are typically tens of thousands of dollars — as taxable income. Most graduate students only receive a modest living stipend of $20,000 to $30,000 annually, and a tax increase of 300 to 400 percent on funds that they never receive would cause many of them to drop out of graduate programs or never apply. Because graduate students must typically work as research assistants or teaching assistants to receive their tuition waiver, this could create a national shortage among undergraduate course offerings and stymie critical research — particularly in STEM fields.

Despite all of these cumulative cuts to government programs and tax deductions relied on by low and middle-income Americans, both the House and Senate tax bills would also increase our federal deficit by well over $1 trillion dollars.

Yes, more than $1 trillion dollars — a number that’s almost too large to fathom. That means that our federal debt would increase more than if we kept our current tax system, according to the Congressional Budget Office. And, because of the federal Paygo law, this increase in the deficit would automatically trigger cuts to a host of government programs, including Medicare. These substantial increases in our federal deficit would also pave the way for cuts to Social Security.

All in all, the Congressional Budget Office estimates that every single person earning below $75,000 per year will experience at least one year of net loss over the next 10 years, when they will either pay more in taxes, receive fewer services, or both. Unconscionably, the people hit the hardest will be the poorest — those making between $10,000 and $20,000 annually.

And, this is coming at a time of increasing economic inequality, when the U.S. is the most unequal nation in the world, with the top 10 percent holding 76 percent of the wealth. The middle class is also shrinking, with nearly half of Americans reporting that they do not even have $400 in savings to cover an unexpected emergency.

These disparities are even starker for people of color, who have a fraction of the wealth that white people do after decades of systemic racism. While the median white household has $111,146 in wealth, the median black and Latino household has, respectively, just $7,113 and $8,348. These tax bills will only exacerbate these racial disparities.

Not only do these tax bills harm the vast majority of Americans, they also weaken our economy. Arguably the time of greatest expansion of the U.S. economy was the long post-WWII boom, during which the government made major investments in housing, college affordability, infrastructure, science and technology, and healthcare. This enabled Americans to increase their consumer spending, which drives approximately 70 percent of our gross domestic product (GDP).

These tax bills would drive us in the opposite direction, shifting money from struggling and middle-class Americans to the wealthiest and corporations, neither of which would necessarily invest the money back into the economy. The wealthiest Americans do not have any unmet needs, so their tax savings would simply go into financial investments. Indeed,over 400 millionaires joined together to ask Congress not to cut their taxes, stating that it would increase inequality and give them resources that they simply do not need. Corporations also do not need tax cuts. The nation’s largest corporations have billions of dollars in cash on their balance sheets, indicating that they are not short on funds to invest in research and development or hiring new employees.

These tax bills will cut down on innovation and inventions that create new wealth and prosperity for everyone. The attack on graduate students’ taxes would sharply reduce our STEM graduates, and U.S. competitiveness in medicine, science, and technology. The rise in inequality and lack of access to educational opportunities will cause us to lose a generation of potential innovators — particularly women and people of color — who weren’t born into wealthy families.

But, there is still time to stop this dangerous bill from becoming law. Contact your Senators and Representatives now by calling the Capitol Switchboard at (202) 224-3121, and urge them to vote against this combined bill.

Going forward, ask your local, state and federal lawmakers to focus on laws and policies that actually grow the economy and create more opportunity for everyone — including raising the minimum wage to $15 per hour, creating career pathways to jobs that pay a living wage through apprenticeship programs and public-private partnerships, expanding the development of affordable housing in neighborhoods of opportunity, expanding access to college through grant programs and additional opportunities for loan forgiveness, and increasing access to credit — particularly for low-income people and people of color. Together, we can ensure that the U.S. truly lives up to its promise as the land of opportunity.

Demelza Baer, a 2017 Vanguard Fellow, is Senior Counsel for the New Jersey Institute for Social Justice, where she directs the Institute's Economic Mobility Initiative.