A Few Ideas to Take to World Urban Forum 7 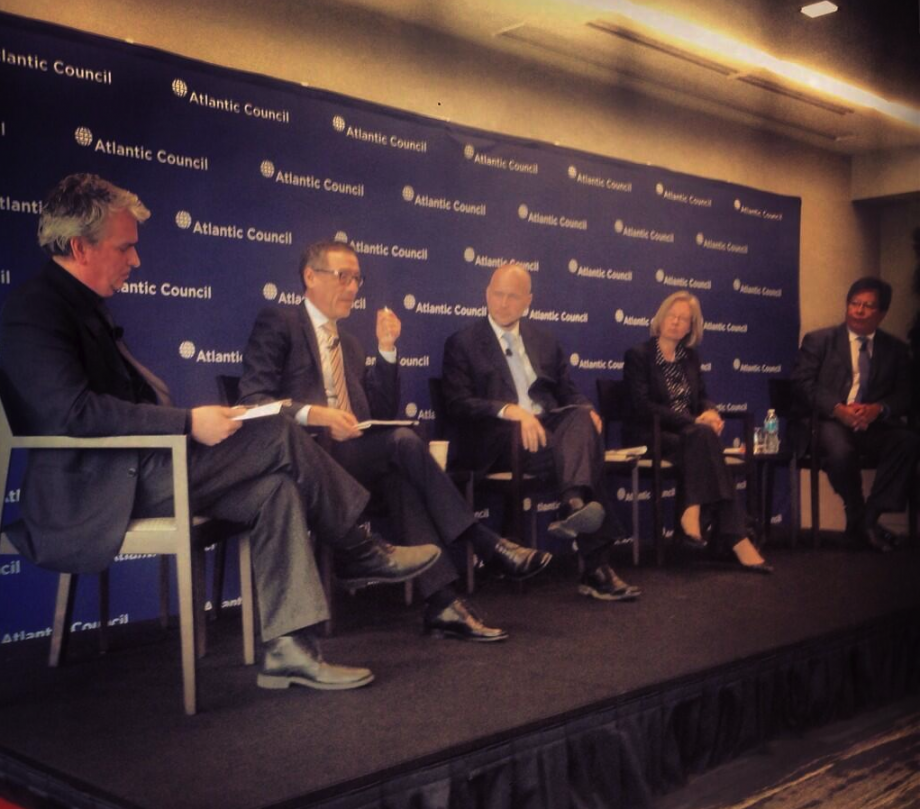 As the U.S. prepares its delegation for the World Urban Forum, the federal Department of Housing and Urban Development and regional partners are hosting a series of panel discussions to source ideas and innovations. On Tuesday in Washington, D.C, the Atlantic Council held the first in a series of dialogues leading up to World Urban Forum 7 for an audience of nearly 200 people. Additional panel discussions will take place in Philadelphia (February 24), Chicago and New York (March 4), and San Francisco (date to be determined).

The event began with Matthew Burrows, director of the Atlantic Council’s Strategic Foresight Initiative, and H.E. Luis Carlos Villegas, Colombia’s ambassador to the U.S., who contextualized the day’s conversation with a focus on Latin America. In the last decade, 70 million people in Latin America were pulled out of poverty. Meanwhile, Latin America is the most urbanized region of the world. By 2035, 315 million people will live in its largest urban areas.

Colombia has undergone tremendous growth and transformation: Its GINI index levels have improved and its economy supports a growing middle class, resulting in what Villegas called “a new Colombia.” Still, 75 percent of people in Latin American cities live in poverty.

With the stage set to discuss the opportunity of improving cities in the U.S. and abroad, the first panel broached the topic of “Public-Private Partnerships for Equitable 21st Century Cities.” Pamela Flaherty of Citi Foundation, Alonzo Fulgham of CH2M Hill and Ana Marie Argilagos of HUD brought their own perspectives on how government and private companies can team up to provide infrastructure, technical assistance, products and services.

Countless panel discussions have addressed the need for and challenges of public-private partnerships, but this one actually provided helpful examples. In one highlight, Flaherty talked about a project from Citi called WHEEL. The country’s first true secondary market for home energy loans, WHEEL would provide large-scale capital for cities to upgrade their residential energy efficiency. Flaherty also noted that green economy jobs aren’t done by people in Mumbai. They happen locally, helping to grow the U.S. economy at the same time.

Unintentionally perhaps, the panel ignored the rapidly growing informal economy until a commenter mentioned Kibera in passing. The panel could have addressed the future of the public-private partnership when the roles of government and corporations in cities are rapidly evolving. The informal economy is growing not just in developing countries, but also in the U.S., where companies like Airbnb and Uber have reinvented the black market. How do public-private partnerships work when the public sector isn’t the one governing and regulating cities, and the private sector isn’t composed of multinationals like Citis and CH2M Hill, but small informal businesses? These are questions worth taking to WUF7.

The event continued with a second panel called “Harnessing Urban Innovation for Global Inclusive Development” and featured Javier Leon from the Inter-American Development Bank, Michael Metzler of USAID, Jaana Remes from McKinsey Global Institute, and Nicholas You, chair of the World Urban Campaign Steering Committee. Innovation turned out to be an ambiguous topic that lent itself to witty soundbites (“Innovation is revelatory or incremental”) rather than concrete examples. Remes provocatively asked whether innovation can be a distraction for civic leaders, instead urging, “Let’s get the basics right.”

With a focus on inclusive development, the panel talked more about financing and the importance of funding for infrastructure and other needs. Only 6 percent of Latin America countries qualify for loans from the World Bank and the International Development Bank. Moreover, smaller cities don’t have the volume to get lending done, according to Leon. The innovation here is encouraging place-based lending: USAID works with financing partners who know the local culture and better vet cities. In the end, if more cities can get more financing, that will hopefully create more inclusive development.

Related: “The Global City Confab: An Intro to the World Urban Forum”