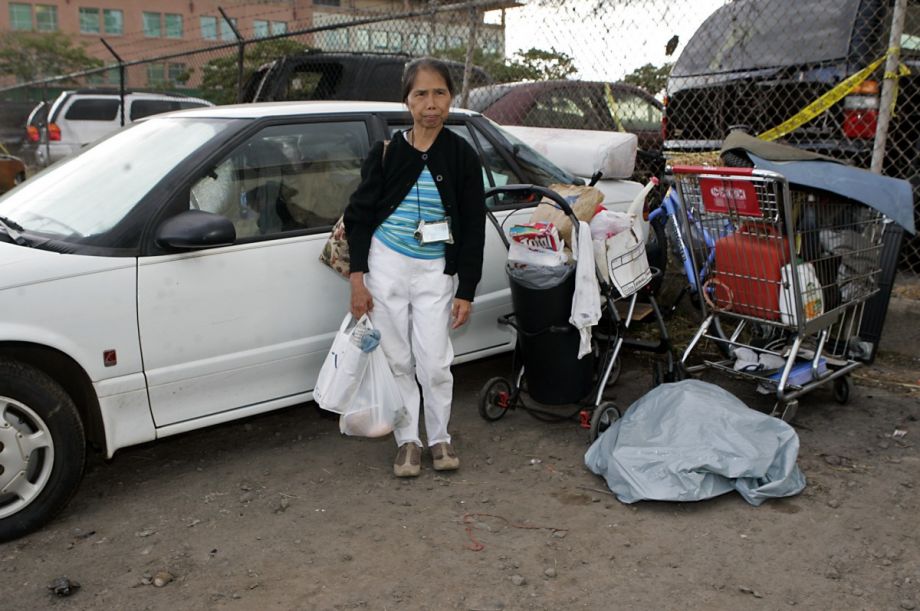 Evelyn Bautista, 58, stands next to the car where she sleeps in Honolulu. A court overturned a law that had made it a crime to live in your car. (AP Photo/Marco Garcia)

Jerome Eskeet fell asleep on a dirty mattress in an abandoned lot in Albuquerque and woke up to a punch in the face from a masked teenager. Dasani saw all of her belongings thrown in the trash by workers at the troubled shelter her family called home. Lawrence Lee Smith, a former construction worker made unable to work by a degenerative joint disease, spent 100 days in a Boise jail. The common crime the led to these three punishments? Homelessness.

Over the last three years, American cities have responded to growing populations of homeless families by criminalizing their lives on the street, argues a recent report from the National Law Center on Homelessness & Poverty, a Washington, D.C.-based legal advocacy group. Surveying 187 cities across the U.S., the group found an increase of citywide bans aimed at preventing homeless people from living in public view. “This increase in city-wide bans shows that the nature of criminalization is changing and that cities are moving toward prohibiting unavoidable, life sustaining activities throughout entire communities rather than in specific areas, effectively criminalizing a homeless person’s very existence,” wrote the authors of the 71-page report. Keep reading for details on how surviving without a home is increasingly becoming a crime.

The most popular citywide bans passed between 2011 and 2013 were prohibitions on camping in public. 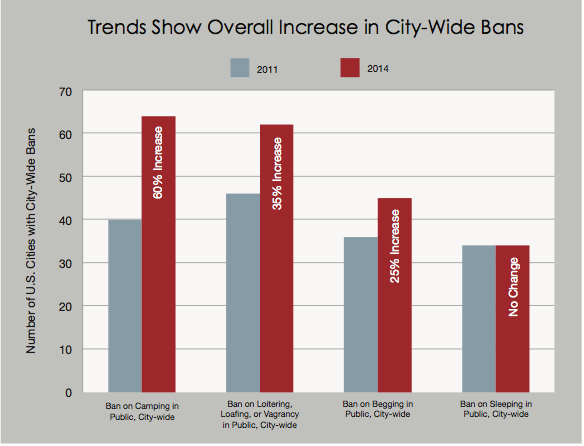 For many cities, however, the prohibitions don’t end with setting up camp. In Virginia Beach, for instance, it is also illegal to beg, or sleep in vehicles anywhere within the city. In a total of 70 cities, including Virginia Beach, it is illegal to lie down or even sit down in public places. 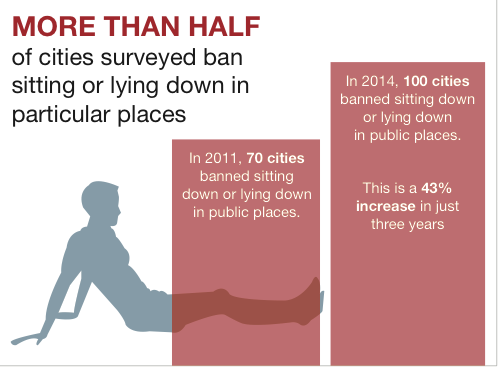 The ban on sleeping in your car or truck is a downright trend with the number of laws criminalizing the action exploding by 119 percent since 2011 — a growth rate higher than any other anti-homeless law.

Sleeping in your car is illegal even in progressive cities such as Minneapolis. In Palo Alto, where rent is two and half times the national average and there are only 15 shelter beds to accommodate a homeless population estimated at 150 people, the city has made sleeping in “one’s own private vehicle a crime punishable by a $1,000 fine or up to six months in jail,” the report’s authors wrote. 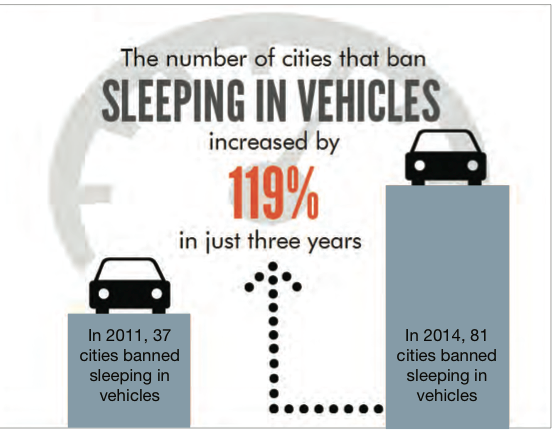 Meanwhile, citywide bans on begging have jumped by 25 percent nationwide.

But while bans on begging have passed with little resistance, ordinances restricting organizations and individuals from sharing food with the needy have raised significant opposition. The ordinances, introduced in cities including Philadelphia, Birmingham and Dallas, have been widely protested across the political spectrum with religious leaders calling on cities to reconsider the laws. In Dallas, the ordinance was struck down in court after a judge sided with religious groups who argued that sharing food with the needy was a religious expression and should be protected under freedom of religion laws. In Philadelphia too, it fell to a judge to stop the city from criminalizing the feeding of the poor. 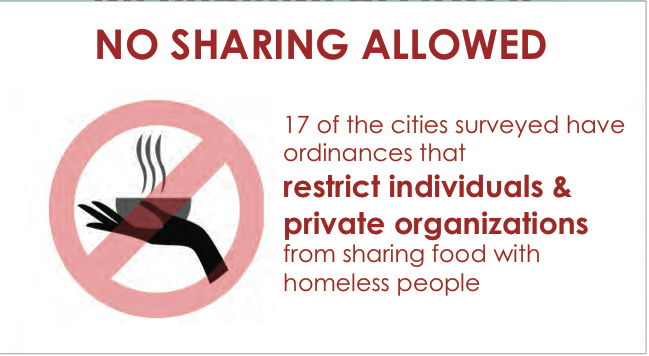 The National Law Center on Homelessness & Poverty recommends cities stop sending homeless people to jail and instead create policies focused on finding homes for people caught on the streets. Learn more about the troubling rise of family homelessness in cities and the policies combating the crisis in Next City’s Forefront article, “The Post-Recession Homelessness Epidemic.”