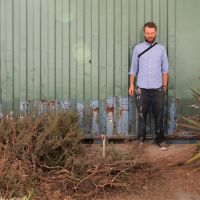 Alex Lukas was born in Boston in 1981 and raised in nearby Cambridge. With a wide range of artistic influences, Lukas creates both highly detailed drawings and intricate Xeroxed ‘zines. His drawings have been exhibited in New York, Boston, Philadelphia, Los Angeles, San Francisco, London, Stockholm and Copenhagen as well as in the pages of Megawords, Swindle Quarterly, Proximity Magazine, The San Francisco Chronicle, The Village Voice, Philadelphia Weekly, Dwell, Juxtapoz, The Boston Globe, The Boston Phoenix, Art New England and The New York Times Book Review. Lukas’ imprint, Cantab Publishing, has released over 35 small books and ‘zines since its inception in 2001. He has lectured at The Maryland Institute College of Art, The University of Kansas and The Rhode Island School of Design. Lukas recently partnered with the The Borowsky Center at The University of the Arts in Philadelphia to produce an eight-color offset lithograph as part of the 2011 Philagrafika Invitational Portfolio. His work was also recently acquired by the West Collection as part of the 2011 West Prize. Steven Zevitas Gallery presented an exhibition of new works on paper this spring. Lukas is a graduate of the Rhode Island School of Design and now lives and works in Philadelphia.

Do Taller Buildings Have to Mean Darker Streets?

Designing for the Dead: The Perfect City Cemetery

The Port of the Future Is Arriving in Los Angeles

This Woman Has a Solution to America’s Pension Problem

The Story on Urban Newsrooms Is Still Looking for Its Hero

Bringing It All Back Home

When We’re All Urban Planners