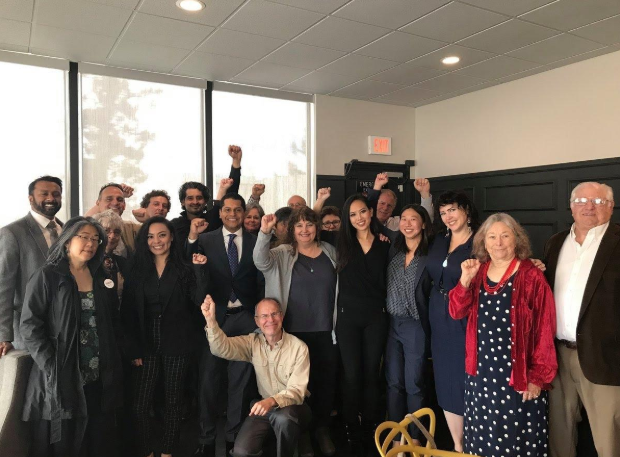 On Tuesday, December 3, join our guest presenters, Trinity Tran and Sushil Jacob of the California Public Banking Alliance, to find out how they organized citizens to help pass public banking legislation in California. This will be the second installment of our 2019 Solutions of the Year webinar series.

The dominant private banking model, which is typically controlled by one corporation or a small group of shareholders, does not enable the public to have control over what happens to their money. While public banking attempts to place the power in the hands of the people, finding funding and other resources necessary for passing the appropriate legislation can be an uphill battle — though it’s not impossible.

The California Public Banking Alliance (CPBA), a coalition of public banking activists, worked to get AB 857, an act allowing the creation of public banks, passed in California state legislature. CPBA organized teams of citizen lobbyists and more than 180 organizations to develop the strategy that got their bill into the Capitol building.

With zero funding and with opposition from Wall Street, the Public Banking Act was signed into California law by Governor Gavin Newsom on October 2, 2019. Now, for the first time, California taxpayer funds could circulate back into their communities instead of Wall Street.

“A system built on extraction is unsustainable,” says Tran. “Once we understand the widespread devastation caused by the private banking system, it becomes our duty to fight to fundamentally transform finance from profit-based to impact-based.”

Tran is the lead organizer of CPBA and co-founder of Public Bank LA and Divest LA. In 2017, she led the grassroots campaign which led to Los Angeles divesting from Wells Fargo. Jacob is the senior attorney for economic justice at the Lawyers Committee for Civil Rights of the San Francisco Bay Area (LCCR). He was also a co-founding member, and co-chair of the legislative committee, of the CPBA.

This seminar is pay what you wish to register. Pay any amount that you would like or nothing at all. Thanks to NewsMatch, all donations, up to $1,000, made toward this webinar will be matched. New monthly donations will be matched for a full year. Meaning if you donate $10 a month, Next City will receive an additional $120. This is a great chance to multiply your impact. Those who become sustaining members paying at least $10 a month, or making a one-time donation of $60, will receive the book “The Just City Essays: 26 Visions for Urban Equity, Inclusion and Opportunity” edited by Toni L. Griffin, Ariella Cohen and David Maddox. Your contribution toward this seminar will be used to find even more amazing guests, cover hosting fees, and organize seminars like this one more frequently. A video of the webinar will be made available to those who register.