The U.S. Strategy for Flood Resilience Is Underwater 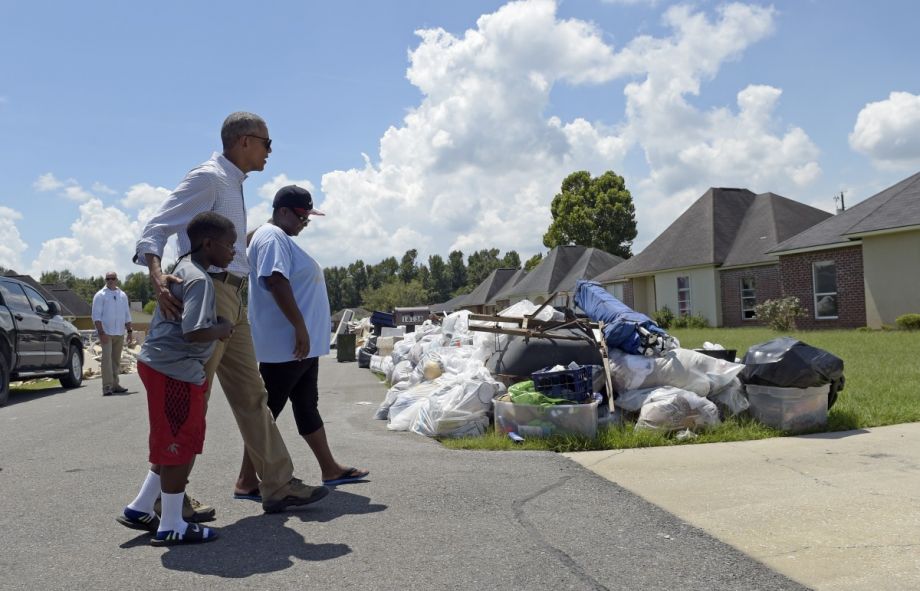 The people of southern Louisiana are reliving a nightmare.

Intense storms produced over 20 inches of rain in the Baton Rouge area. The resulting flood crisis claimed the lives of 13 people, and over 20,000 people had to be rescued by the Coast Guard and other first responders. Over 40,000 homes are damaged, many irreparably. President Barack Obama’s administration has granted an emergency disaster declaration expected to apply to more than 30 parishes — nearly half of all parishes in the state.

As the impacts of climate change continue to accelerate, water is projected to be one of the most impacted resources, increasingly experienced in extremes: rising sea levels, superstorms and drought. This is not the first time that Louisiana has experienced these extremes. Hurricane Katrina is still a painful wound in New Orleans, both in local memory and in the physical destruction left in her wake. On the Louisiana coast, indigenous communities have been losing a hard-fought battle against rising sea levels as the Gulf of Mexico swallows their homes, contaminating drinking water and bleaching agricultural lands.

Unfortunately, experts predict that this flood crisis will not be the last. Rising sea levels associated with impacts of climate change are predicted to ravage the Louisiana coastline, where 1.29 million people are at risk. Facing rising waters, residents in one Alaska town voted in August to move their entire village. National displacement as a result of sea level rise is projected to reach 13 million people by the end of this century.

Researchers at MIT and Princeton University have found that the types of superstorms that used to make landfall once a century could now arrive every three to 20 years, and that so-called “500-year floods” might arrive as often as every 25 years, according to findings published in Nature Climate Change.

These impacts of climate change wreak havoc on infrastructure, livelihoods and access to potable water. How is the government responding? To be sure, federal disaster relief, such as that issued for the flood crisis of southern Louisiana, is an appropriate short-term response. However, long-term solutions are imperative. And because the United States does not recognize the human right to water, proposed solutions must, unfortunately, strike a delicate balance between providing access and denying that access is due to citizens.

The National Disaster Resilience Competition, a program the Department of Housing and Urban Development kicked off in 2014, is attempting to strike this delicate balance. Heralded as the first step toward a long-term solution for communities displaced by rising sea levels and superstorm floods, the competition awards funding to communities for proposed resilience projects. But does this competition have what it takes to meet the swiftly approaching water challenges associated with climate change?

A closer look at the competition is revealing. With the first round of funding awarded earlier this year, several states received funding for proposed resilience projects. Of particular note, the Biloxi-Chitimacha-Choctaw Tribe of Louisiana was awarded $48 million to relocate their entire community from the Isle de Jean Charles to higher ground to escape rising sea levels associated with climate change.

Dubbed the “first U.S. climate refugees” in the press (though they are hardly the first community in the country to be displaced by climate change), the Biloxi-Chitimacha-Choctaw Tribe and their relocation is considered a test case for the use of HUD’s competition.

At first glance, the award might seem like a viable solution for communities struggling to adapt to rising sea levels and superstorms. However, replicating this competition threatens to institutionalize some very dangerous mistakes. This competition fails on three crucial measures: It does not provide legal protections for people who have been displaced by floods associated with climate change. It falls far short of a just, equitable solution by pitting vulnerable communities in competition with each other for assistance. Perhaps most damningly, it simply won’t help people fast enough.

Legally, Who Is a “Climate Refugee”?

Despite the media references concerning the Biloxi-Chitimacha-Choctaw Tribe, the designation of “climate refugee” does not legally exist. Climate and environmental issues are not recognized within the definition of refugee in the UN’s 1951 Refugee Convention. The establishment of this direly needed refugee category is a battle not yet won in the U.S. or, indeed, anywhere in the world.

An official category matters. Attempting to forge solutions for people who are displaced because of climate change without legally recognizing them as refugees establishes a pattern of public acceptance of the government’s refusal to respond to this crisis in a way that builds protections for people who will suffer the same fate in the near future. This lack of legal precedent means that the people of southern Louisiana who are now being forced out of their homes due to climate change-related flooding have no legal category of long-term protection.

Nor will the next community that is displaced.

The competitive feature of HUD’s initiative is deeply unjust, requiring that communities suffering environmental destruction compete for resources. This is tantamount to a competition for basic human rights — water, shelter, safety and food. This approach instantly privileges communities of wealth that are able to dedicate resources to grant writing and proposal development.

The competition will replicate existing structures of social inequity — particularly because, despite contributing the least to climate change, indigenous and poor communities are often hit first and hardest by its impacts. Forcing communities to essentially compete to access water, food and shelter goes far beyond a refusal to recognize these human rights. It is a grotesque devolvement of human rights in the United States.

While HUD’s grant to the Biloxi-Chitimacha-Choctaw Tribe has received substantial media coverage, a lesser-known fact is that the Tribe was denied resettlement assistance by the United States government for over 16 years. While they waited, advocating tirelessly to the government for relocation help, their homes languished in the rising sea, their drinking water was salinated and crops were ruined.

Imagine how this scenario will play out for the flood victims of southern Louisiana. Will they be told to wait until the next grant cycle? Advised to hold a community meeting in their flooded homes, pull a laptop from the water and draft a funding proposal?

The people in the floodplains of southern Louisiana can’t wait 16 years for long-term solutions.

Rising sea levels, superstorms and drought will continue to threaten access to water as the impacts of climate change accelerate. We must transition from reactive to proactive. We must call for recognition of the human right to water. We must refuse to accept funding mechanisms that award support through competition. And we must call for legal recognition of people who are internally displaced as a result of climate change as climate refugees.