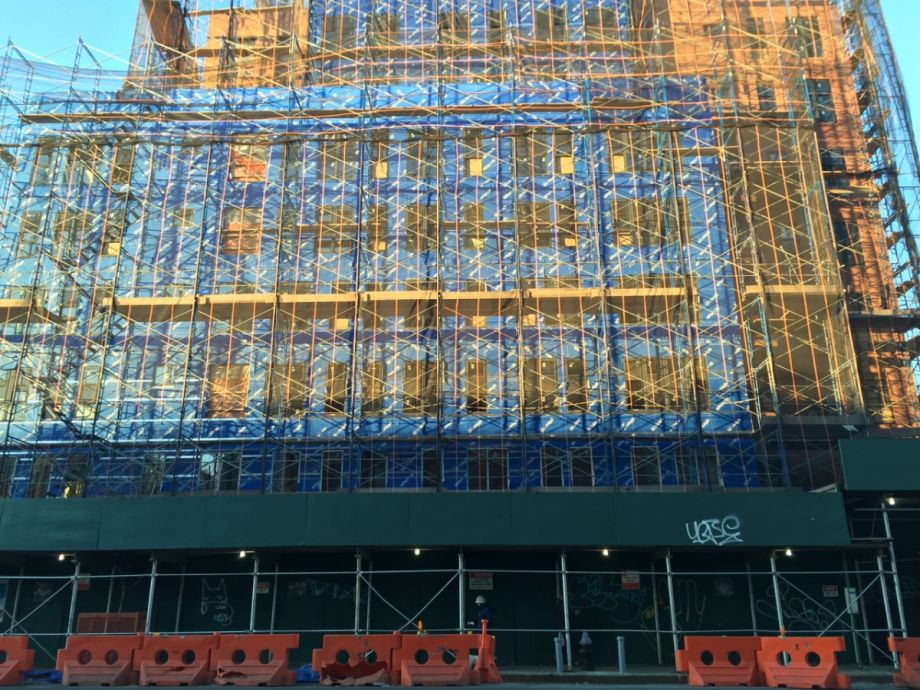 At least 20 percent of the planned 50 units at Brooklyn’s Albany Apartments will be designated as affordable. The project includes 18,000 square feet of commercial space. (Photo by Oscar Perry Abello)

Communities, affordable housing organizations, public space advocates, local businesses, and the NYC Department of Housing Preservation and Development (HPD) disagree about a lot — from development decisions, to the definition of affordable.

But there’s at least one thing on which they all agree: Poorly designed ground-floor space in new, mixed-use affordable housing developments is a persistent challenge, limiting the vitality and value of such developments to developers, owners, residents and neighbors.

“If you look in certain neighborhoods of New York, new buildings go up, and then the ground floor sits vacant, in some cases unfortunately for years,” says Michael Lambert, executive director of the Bed-Stuy Gateway Business Improvement District (BID), stretching 1.5 miles in Central Brooklyn, with more than 370 businesses and more than 440 properties, nearly all of them mixed-use. At least six new buildings are currently under construction on the corridor.

“In some of those cases, the retail component of those ground-floor spaces was more of an afterthought,” Lambert says. “Businesses find that those spaces don’t really match with what they want to do.”

“When you look at mixed-use projects where attention hasn’t been paid to ground-floor commercial space, you see dead spaces, dead zones,” says Eva Alligood, deputy director of LISC NYC, which provides financing and technical assistance for affordable housing all around the city. “I think the city has recognized that is problematic, especially when the city is putting a ton of money into mixed-use affordable housing developments.”

“[Poor ground-floor design] increases the chance for vacancies, and vacancies threaten the viability of our projects, detract from the quality of neighborhood street life, and waste an opportunity to increase local employment,” writes HPD commissioner Vicki Been, in the preface of a newly released guidebook on ground-floor design in mixed-use affordable housing developments, produced in partnership with the Design Trust for Public Space.

The 87-page guidebook, “Laying the Groundwork: Design Guidelines for Retail and Other Ground-Floor Uses in Mixed-Use Affordable Housing Developments” (print versions available for $20), features checklists, illustrations and real-life examples from NYC as well as from other cities. Lambert and Alligood were among the 68 representatives of affordable housing developers, designers, city agencies, CDCs, BIDs and other stakeholders that provided feedback as part of drafting the guidebook.

By late 2014, 1.7 million square feet of commercial space already existed within city-financed, multi-family affordable housing developments. An estimated 2 million square feet of ground-floor commercial or community space will come about as a result of Mayor Bill de Blasio’s 10-year plan to create or preserve 200,000 units of affordable housing, which HPD is primarily responsible for implementing.

Going forward, “Laying the Groundwork” guidelines will be incorporated into HPD’s requests for proposals, into the evaluation of development proposals, and into the review of architectural plans to ensure that retail space in new affordable housing developments will be a community asset.

“HPD was really concerned about some of their smaller developers who were not as informed about what good design could do,” Susan Chin, executive director of the Design Trust, says of the guidebook concept.

Many of those developers work with LISC NYC. Since its inception three decades ago, LISC NYC has invested roughly $1.7 billion in 75-plus CDCs and other affordable housing developers in the city, supporting the creation of more than 32,000 affordable homes and apartments and more than 2 million square feet of commercial space.

“A lot of our community partners have developed retail spaces and attracted businesses to those spaces, but they’ve shared with us that commercial space design is a whole line of business in and of itself, apart from the affordable housing they’re experts at building,” Alligood says.

Many of LISC NYC partners are nonprofit organizations that do more than just develop affordable housing. Well-designed space could house some of the other work they do, and commercial tenant rent can support some of the other programs and services they provide, Alligood points out.

“You can’t fault affordable housing developers, because public subsidies are focused on housing and that’s been their mission historically,” notes Chin. “It seems odd, but I think it’s quite new for us to see this kind of investment in a whole neighborhood, a complete neighborhood, including new job creation.”

Does better-designed ground-floor space, however, lead to high-end commercial tenants that won’t necessarily serve or employ residents of affordable housing?

“It is something we think about, because we’re asked all the time why are we interested in improving public space and aren’t we just gentrifying a neighborhood or just displacing residents,” Chin says. “That’s just not what I’m interested in. I’m interested in providing quality public space, including retail space, for everyone, for all New Yorkers.”

The biggest challenge, Chin says, will be winning over the developer community, especially small or nonprofit developers. Cost is a big concern. That’s why Design Trust also released a tool to demonstrate the costs of applying the guidebook’s mechanical, electrical, and plumbing recommendations.

The guidebook’s impact may hinge on the city’s 72 BIDs, 39 of which are in low- to moderate-income neighborhoods. BIDs generally find themselves as key go-betweens, facilitating conversations between owners, developers and potential commercial tenants.

“I recently attended a breakfast with some of our stakeholders, talking about retail attraction needs and other trends,” Lambert says. “The question came to me from one of the property owners about whether or not there was any way people who are developing their properties could actually have a better sense of how to design these spaces in a way that actually attracts commercial tenants.”

It wasn’t the first time he fielded that question. It won’t be the last. Now, he finally has something he can send along.