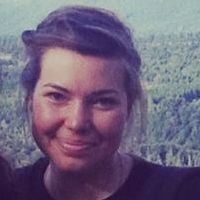 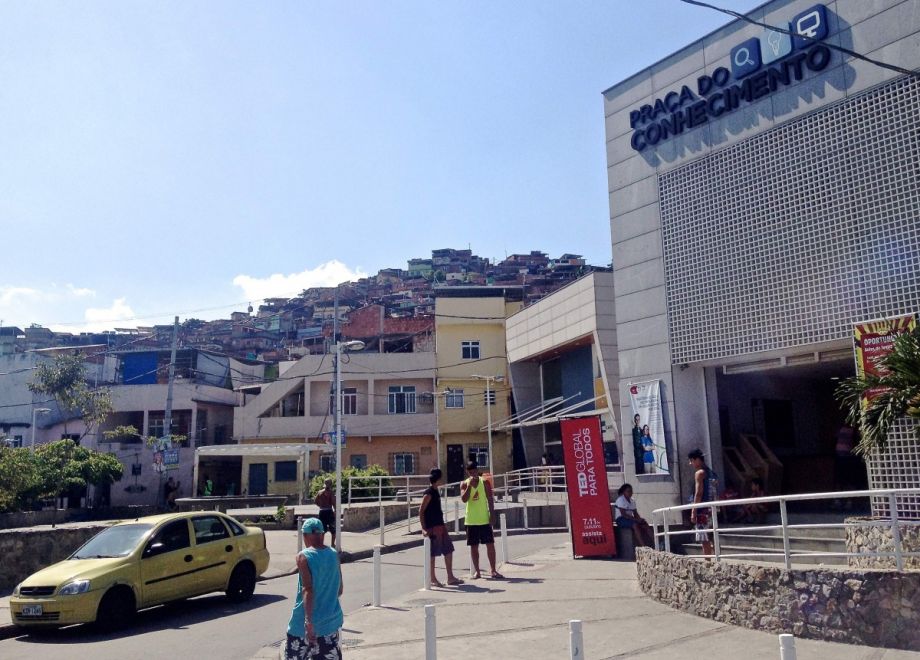 Rio’s Complexo do Alemão, which has a Knowledge Plaza and a gondola, but not basic sanitation.

The internet was down two weeks ago in the three-year-old, high-tech Knowledge Plaza in Rio’s Complexo do Alemão favela, an informal settlement home to 120,000. In front of the two-story concrete education building, a six-foot banner announced “TED Global for Everyone: Watch Here.”

“You can’t watch here,” said the staffer at the front desk. “I’ve been calling the internet company for three days, and they haven’t sent anyone.”

Not to be discouraged, web design teacher Felipe Fernandes, 33, booked a van for his Wednesday students to go watch in the nearest of Rio’s seven Knowledge Spaceships, all built in the last two years by the city government. The Knowledge Plaza and Knowledge Spaceships are after-school and adult-education facilities, most designed in the Bauhaus style with futuristic, concrete prism exteriors and what look like lima-bean shaped periscope lenses above their front entrances. They’ve been built in low-income neighborhoods, so Fernandes’s class chose the Spaceship at a nearby housing project in North Rio’s Triagem district.

The ground floor of Triagem’s Spaceship had one area with adults and children clicking away at desktop computers and another, emptier, with touchscreen panels on the walls. The class climbed to a third-floor room to sit at desks with closed, shiny laptops and to watch a Portuguese-dubbed version of the lectures occurring in real time at the TED Global conference on Rio’s Copacabana Beach.

During the two hours that the lectures were streaming, several dozen residents of the housing project used computers on the building’s ground floor, but only seven came up to check out TED, walking out before the lectures finished. Fernandes’s class sat in silence as the TED speakers talked protests and the media, wiring Africa, small satellites and mind-controlled robots.

Back in Complexo de Alemão after the session, several students agreed the talks had been difficult to follow, but planned to research speakers more online as Fernandes had encouraged them. Fernandes and his colleagues are contracted by the city government through an NGO that aims to develop citizenship along with technology instruction, and they have inspired real motivation in students. As Knowledge Spaceships in other neighborhoods flesh out their course offerings under separate management by the city’s Science and Technology Secretary, much will depend on teacher engagement.

The Knowledge Plaza itself starred in a TED talk in February 2012, in fact, in which Rio mayor Eduardo Paes said the city’s favelas can offer solutions to the challenges of urban life if they receive “basic services, mainly education and health with high quality.”

For that reason, Paes said the city would “completely urbanize” all of Rio’s favelas by 2020. He was referring to a program called Morar Carioca, in which the city partnered with 40 architecture firms to draw up careful plans for public works in favelas, with a tenet of surveying for resident priorities. Plans were heavy on sanitation upgrades and health investments – the types of basic services that any community needs to thrive.

But in early 2013 the Morar Carioca program was frozen save for a few flashy projects like environmentally friendly public housing units in a favela near Copacabana Beach. A separate federal program called the PAC funded some public works in Complexo do Alemão between 2008 and 2011. In dozens of planning meetings for the PAC, residents and local leaders had agreed their priority for investment was a comprehensive basic sanitation system. But here, too, a disproportionate amount of the money ended up going to a high-visibility, glitzy project – in this case, a 3.5-kilometer gondola system that whizzes over the top of the favela.

This gondola, which is used by only seven percent of favela residents, has become a tourist attraction and has infuriated many in Complexo do Alemão, who are still waiting for the majority of sanitation upgrades. Alemão is the neighborhood with the lowest Human Development Index in the city of Rio. Here, people live on average seven years fewer than residents of the rest of the city. Tuberculosis is a problem, and many residents miss school and work due to illness. Community leaders have pointed out that investment in basic sanitation has proved the most effective way to reduce poverty in Brazil in the last 20 years, with every dollar spent in sanitation saving four dollars in healthcare costs down the line.

But Alemão residents got the gondola instead. Now another gondola is planned for South Rio’s Rocinha favela, where over 10,000 homes are estimated to be disconnected from the sanitation system. That number might have been lower, but in recent years, investment in public sewage for Rocinha was left unfinished in favor of projects like a high-profile highway overpass designed by the famous modernist architect Oscar Niemeyer. For over a year, Rocinha’s community leaders have packed public forums and distributed online petitions to say that instead of a gondola, “sanitation is our priority.”

“It’s unacceptable to think about a millionaire investment like this for a favela that does not have basic sanitation, where people live in houses that are invaded by rats and cockroaches, without ventilation,” wrote resident Davison Coutinho in a December 2013 op-ed. “We cannot and will not keep living among ditches with open sewage… while tourists pass over our head observing from on high how hard the poor favela-dweller’s life is.”

Fernando Henrique Cardoso, president of Brasil from 1995 to 2003, applauded TEDxMaré for its part in helping build democracy.

Rio’s mayor speaks less about basic upgrades for favelas across the city these days and more about the 40 Knowledge Spaceships he says will be installed by 2016. Last month he launched an online platform where residents can type in suggestions to improve the city, to be accompanied by a series of meetings – governance through what he calls “polisdigitocracy.”

But Helcimar Lopes, 39, who started a technology school out of his house when the first internet connections arrived in Complexo do Alemão in the early 2000s thinks digital literacy is possible with far fewer expensive gadgets. He says if the government really wanted to empower people through online education, it would simply make sure that its free Wifi network for poor neighborhoods, called Rio Estado Digital, actually had a good signal.

Independent of the city government, Rio’s residents have been participating for years by attending forums, hitting the streets, and campaigning around petitions on sites like Avaaz and Meu Rio. Hundreds of thousands have clearly articulated their priorities for the city. More sanitation. Support of community-run education centers. More investigation of unsolved kidnappings.

For instance, an easy step the city could take would be to heed current calls from three online petitions and three government cultural agencies for the mayor to use his power to prevent the closing of a longtime community center in the Maré favela. It is home to the kind of grassroots teaching and cultural activities that make favelas resilient places, the bedrock principle of the mayor’s statement that “favelas can offer a solution.” Last year in this space, Maré residents and allies – including former Brazilian president Fernando Henrique Cardoso, artists, intellectuals and police officers – organized the world’s first TEDx conference in a favela with talks on identity, public security, drug policy, education and the media. No attendee reported confusion. It was a smash success.

Petitioners say saving the Maré Museum would honor a beloved resource and save the government time and money in trying to recreate something equally effective from the top down.

Helcimar Lopes of Complexo do Alemão says that regardless of public officials’ communication methods with citizens, “What I would really like is for the government to simply provide the services it is supposed to, and says that it does. Basic education. Healthcare. You don’t need to re-invent the wheel.”

Catherine Osborn moved to Rio de Janeiro in 2012 for a Yale research fellowship on public participation in urban planning. She contributes to print and radio outlets. Follow her on Twitter at @cculbertosborn