Tenant Organizing Is Picking up Steam in Rochester – Next City

Tenant Organizing Is Picking up Steam in Rochester 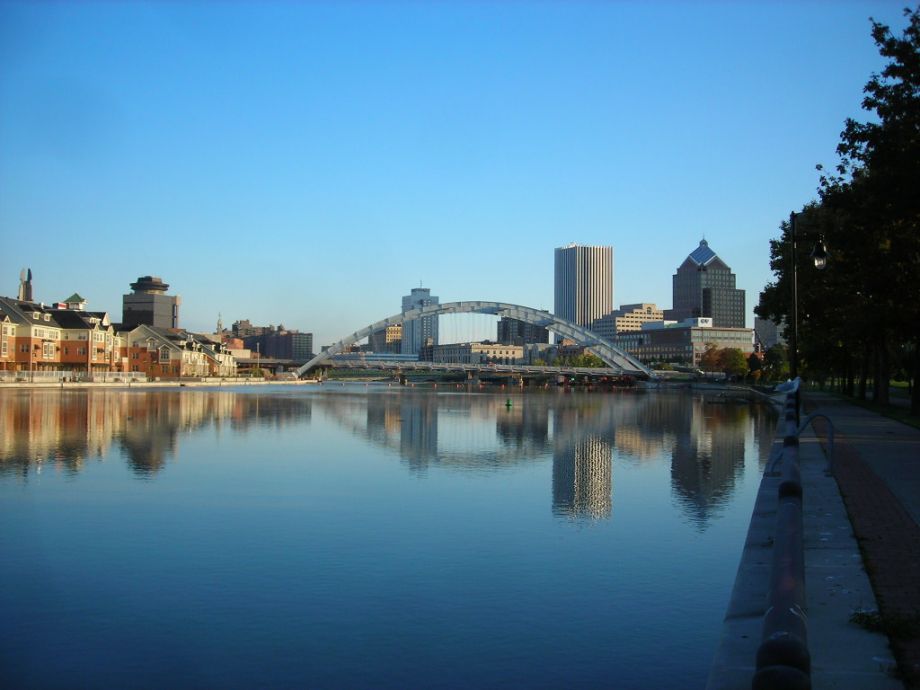 This past February, Elizabeth McGriff, a resident of Rochester, New York, moved back into her home at 618 Cedarwood Terrace. It was no small act, following a foreclosure local housing activists deemed unjust, prompting more than five years of bank negotiations, eviction blockades, rallies, acts of civil disobedience, prayer services, lockouts and a “live-in,” in which McGriff and others moved back into the house after sheriff’s deputies removed her belongings.

The actions were led by Take Back the Land Rochester, a housing organization aiming to take bank-controlled land and return it to the community in the form of community land trusts — specialized nonprofit organizations that take ownership of land on behalf of a community, often with the purpose of making it available for affordable housing or commercial space.

After the successful protest surrounding McGriff’s home, which MidFirst Bank ultimately sold back to her, she transferred ownership to the City Roots Community Land Trust.

City Roots Community Land Trust was founded in 2016 to permanently preserve housing affordability in Rochester through a model for community owned and managed land. At 618 Cedarwood Terrace, McGriff maintains homeownership and rents the land from the trust, which in turn ensures the home will remain at an affordable price when it is sold.

The work of the trust is a sign of shifting tides around housing advocacy in Rochester, according to Joe Di Fiore, board president of City Roots. A postindustrial city along the southern shore of Lake Ontario, Rochester ranks as the fifth-poorest city among the top 75 largest metropolitan areas in the United States. In 2017, housing court issued 3,510 eviction warrants in Rochester. And with roughly 65 percent of residents renting, more than 50 percent of Rochester residents pay more than 30 percent of their take-home income on housing.

Since the 2008-2009 financial crisis, Rochester has seen a dramatic uptick in housing advocacy. Take Back the Land led a number of eviction blockades — like the one for McGriff’s home — and last year, organizers launched a citywide tenants’ union, a homeless union and a union of senior citizens in subsidized housing.

Di Fiore has witnessed public sentiment change around the work. “When the eviction blockades first started happening, it was looked down upon,” he says. “Then, as more and more people were touched by the housing crash and foreclosure crisis … people started getting more sympathetic on and on-board with the cause. It’s empowered a lot of people.”

The formation of the land trust is part of a what Di Fiore calls a “multi-pronged effort for housing justice and advocacy.”

City Roots’ first year was dedicated to education and outreach among Rochester residents regarding the model. “The land trust is a new concept for people in general, but especially in Rochester,” Di Fiore notes, adding that only one community land trust was established prior in the 1990s and quickly went defunct.

Taking over the deed at McGriff’s home was considered their first major victory. Now, City Roots is determining how to move forward. They formed a partnership with Genesee Co-op Federal Credit Union, whose chief executive, Melissa Marquez, serves on the land trust’s board.

“We are exploring how we can provide permanent financing, mortgages, to homeowners who purchase a house where the land is owned by the land trust,” Marquez says.

With its high rent-burdened population, Rochester is part of a rising homelessness crisis across the state, especially in cities where residents do not have the same tenant protections offered in New York City. “We are not just thinking about affordable homeownership,” says Di Fiore. “We want to show the versatility of the model.”

In that vein, City Roots is working with a tenants union to buy out a rental complex and form a limited equity co-op, offering residents the opportunity to buy their apartments at an affordable price.

This April, after an attempted removal of the encampment, “people mobilized,” says Murphy. “They formed a blockade with locked arms … there was a kind of showdown.” He believes the effort prompted the city to consider a more permanent location for the encampment.

Last month Rochester’s City Council approved a measure to convert a vacant lot into a designated encampment. If all goes according to plan, the land will ultimately turn over to the City Roots Community Land Trust, with Saint Joseph’s House continuing to provide support and services to the residents.

Trees will be planted on the site; the city also agreed to provide refuse pickup and allow pallets to set up tents. Murphy says they modeled the encampment off a sanctioned tent city in Seattle, though he added the involvement of a community land trust is unique. Approval by the City Council, he says, “gives a nod to the community land trust from the city, that they’re willing to transfer the land to them and they trust them.”

Besides the encampment, City Roots has three properties pending to be transferred into the trust and hopes to get funding this summer to purchase nine more over the next two years. An angel investor, Di Fiore adds, plans to loan the trust another $100,000 for additional properties.

“I feel really optimistic about how it will all turn out,” Di Fiore says of the encampment, but the sentiment also applies to what’s ahead. “We’ve used [the land trust] to stave off a home foreclosure, we’ve used it to set up a homeless encampment, we’re working with a tenants union,” he says. “It’s not just about fixing up or building a house.”