Tearing Down Idora – Next City 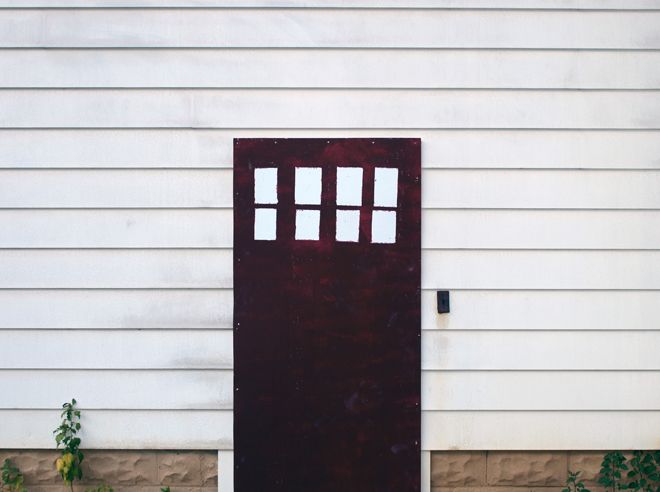 Not an exit. Clark Mizono

In “Youngstown”, Bruce Springsteen tells the story of the rise and fall of the small steel town in Eastern Ohio, through the eyes of a second-generation steel worker. In the second verse, the father of the narrator laments, “Them big boys did what Hitler couldn’t do,” in reference to the rubble of his old workplace. And since Big Steel left the Western Pennsylvania and Eastern Ohio, so, too, have the steelworkers. Pretending Springsteen’s narrator is a real person, he’s likely long gone from Youngstown at this point, having left behind his home, and the city he loved so much.

A few months back, Urban Nation spoke with community organizer Phil Kidd, of the Mahoning Valley Organizing Collaborative, a community organizing group that frequently partners with the Youngstown Neighborhood Development Corporation, about the two organization’s difficulties with certain federal programs — specifically HUD’s CDBG funds, NSP funds, and EPA asbestos regulations — and the way they stifle redevelopment efforts in weak-market cities like Youngstown. In short, Kidd believes that these programs are not designed for places like Youngstown, because it prevents them from being able to take down all the vacants and blighted properties that make neighborhoods unsafe to live in.

When I sat down with Youngstown Neighborhood Development Corporation’s director Presely Gillespie the other week, he reiterated much of what Kidd said. That, yes, NSP funds’ cap on demolition makes things difficult for YNDC do to what YNDC does — take down buildings and replace them with “cleaned-and-greened” lots, or community gardens. Also, yes, that CDBG funds, being distributed based on population can harm shrinking cities, but he also faults the lack of creativity in Youngstown’s city hall for their tendency toward using what he called “the peanut butter approach” to spending federal dollars — spreading it around evenly, making focused neighborhood revitalization quite difficult.

To contrast, YNDC targets specific neighborhoods in Youngstown with high levels of vacancy, but that are salvageable. Their main target neighborhood is called Idora, just south of Youngstown’s modest downtown. I was fortunate enough to have Liberty Merrill, a YNDC employee and graduate student at nearby Slippery Rock University, take me and Clark on a tour of Idora to get a better look at YNDC’s work.

YNDC’s approach to economic development is at once cosmetic and functional. Many of the things they do in Idora seem to be purely cosmetic, but they actually improve public health, safety, and of course, the aesthetics of the neighborhood. Our first stop was a house that YNDC had rehabbed and put back on the market. Before getting all caught up in the mechanics of rightsizing, and greened lots, it is important to state that this is ultimately YNDC’s goal: to create market viable communities. And, as Mr. Gillespie tells me at the office, to one day bring in revenue. As a former banker, Presley thinks that’s the best way to prove the worth of your mission: the margin. The house itself was nice, a modest Cape Cod-style house, with two stories and a garage. The block was nice, too, especially when compared with other blocks in the Idora neighborhood.

Glenwood Avenue, the main drag, was in sorry shape. Even the liquor stores were closed. I was surprised to see an apparently functioning neighborhood cinema — that quaint old symbol of thriving neighborhood business — until we pulled closer and saw the marquee. It was open indeed, but let’s just say it isn’t a place to catch a matinee with the kids. Also, if I recall correctly, Liberty told us there are no grocery stores in Youngstown, or maybe one.

Then, Liberty took us down one street where they had recently boarded up about 15 vacant homes, with the help of volunteers and Home Depot. If you were just driving down the street, you might not notice the vacants, because YNDC, along with their volunteers, painted drapes on the pieces of plywood that cover windows, and doorknobs on the plywood that covers doorframes. They’re all drawn with a sort of Harold and the Purple Crayon childish sloppiness, which Liberty explains is a result of the sheer number of faux-drapes and faux-doors they had to paint. If you can believe it, though, it lends the boarded-up homes a bit of whimsy, which is quite unexpected. Instead of urban blight, it’s almost like looking at a real-life version of a child’s drawing of his family’s home — window frames askance, everything purple or pink. I had the same feeling I had upon seeing North Philadelphia’s cleaned-and-greened lots — after which YNDC has modeled their Lots of Green program — is this an urban revitalization project? Installation art? Both?

Idora, incidentally, was home to a famous amusement park, which burned down in 1984, and was left standing until more recently, when it was finally razed. All that remains is the old streetcar stop in front of the old site, no streetcars run in Youngstown anymore to my knowledge. Thinking back to the amusement park aspects of Braddock’s blight, this seemed perfectly appropriate for Youngstown — that it was gone. It’s not around to be fetishized or photographed, or worse.

The vastness of the open spaces in Idora is striking, but at least one isn’t surrounded by building caving in on themselves. Unlike Braddock, which has been able to leverage its blight into something marketable, Youngstown is going the opposite — and more intuitive — direction, making their neighborhoods safer for investment by removing the blight.

But YNDC isn’t just disappearing the blight, for they realize that something must replace it — the community gardens and green lots are not permanent fixes — and this is where federal funding comes into the picture. They also have a workforce development program, called The Youngstown Grey to Green Initiative, which trains Youngstown youth in urban agriculture and landscaping, as well as building deconstruction — an unfortunately budding field there, but one that has transferable skills. Presley tells me they have recently received Department of Labor funding for that initiative. Also, he tells me that they have a new jobs program modeled after the Cleveland Foundation’s neighborhood cooperative program. After eight years of working at one of these co-ops, Presley tells me, a worker will have $75,000 worth of equity in the business. Best of all, for those who work there, the “big boys” can’t turn it to rubble.

But even with generous government grants and philanthropic donations, Presley wants YNDC to prove its own worth by proving their market worth — by generating revenue. This, he thinks, is the best way to show that YNDC’s work has intrinsic value. It’s surprising how novel it is to encounter for-profit know-how mixed in with non-profit know-why, and it’s refreshing in that way. Because even with new federal programs and philanthropic money, the ultimate goal is that the neighborhood should sell itself — that people should want to live there.

Presley told me that they recently helped a couple from California move into Youngstown. He could tell, as a Californian, that I was stunned. Well, yeah. But in a good way.