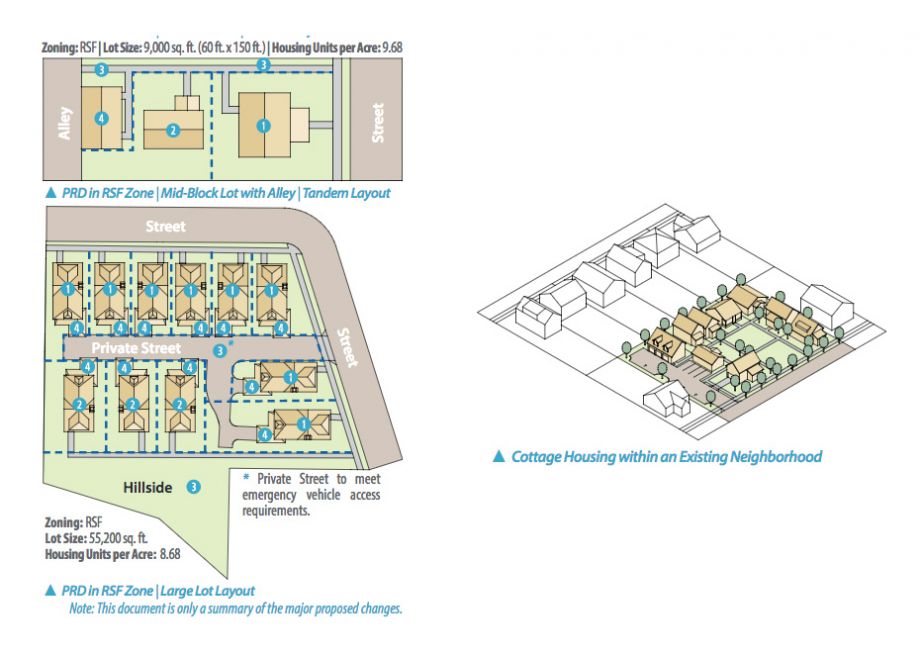 Examples of how the new small or tiny homes could fit into Spokane's urban fabric. (Courtesy Nathan Gwinn/City of Spokane)

Spokane city council president Ben Stuckart wants more infill development in his city. Denser infill will be key, he says, to bolstering the tax base, improving affordability and creating mixed-income neighborhoods in the eastern Washington city, the state’s second largest. Late last month, the city council took a step towards that goal with the unanimous adoption of an ordinance that makes zoning changes and creates density bonuses for pocket residential development and cottage housing they hope will make infill more financially attractive to developers.

“We’re looking at where there were barriers to development,” says Spokane city planner Nathan Gwinn. “This could allow some sites, especially those of a difficult shape or with development constraints, to be developed where they might not have been before.”

Pocket residential developments and cottage housing are both development types that allow multiple smaller housing units to be built a single lot amidst traditional single family homes. Both were previously allowed in Spokane, but the changes tweak their design rules to make them easier to build.

PRDs can be built on lots as small as 8,700 square feet (.2 acres) and up to 1.5 acres. They allow small lots that would normally only have a single house to be subdivided. For example, an 8,700-square foot lot could have two houses. A 1.2-acre lot could have 11 small houses on it. The new ordinance allows PRDs in residential single family zones without the upzone previously needed.

Cottage house developments have four or more units built on a single lot with a shared common yard in the center. Cottage houses can have maximum footprint of 1,000 square feet, though they can be two stories for a total of 2,000 square feet. One of the key pieces of the ordinance is the cottage housing density bonus. Developers can now build 12 units per acre instead of 10, in residential single family zones. If the units are tiny homes—500 square feet or less—developers can build 14. For both PRDs and cottage housing, the ordinance removes a rule that such developments must have one owner, meaning developers can sell the units like single family homes. The developments don’t necessarily have to be built facing a public street. They can be accessed by private road, giving developers more flexibility on a given site.

Like many western cities, Spokane has very suburban, single-family housing development outside the city core. Unlike like some of the booming coastal cities, Spokane has lots of vacant lots within city limits—around 3,700, according to a recent survey.

“We have a spread-out city and have quite a few lots that haven’t been developed,” says Stuckart. “We’ve got to figure out how to make it easier for people to develop them.”

His hope is that by making it more financially feasible for developers to build denser infill housing, it will increase the housing stock, improve affordability and keep people from sprawling further into Spokane County. “We still have a very low median income compared to coastal cities. The only way we’re going to provide the level of service people expect from their government is by getting more people living in city limits or raising taxes—and nobody wants their taxes raised. The second thing is density and infill are just less taxing on your physical services—water, police, fire, roads. It’s always cheaper to provide those services inside the city.”

Spokane’s median home prices have risen steadily over the last few years. Vacancy rates hit a record low of 3.7 percent in 2016 and have only increased to about 4.6 percent since. The Washington Department of Commerce’s 2015 Housing Needs Assessment found that around 24,000 homeowners and 28,000 renters in Spokane are burdened by their housing costs.

Stuckart says the tiny house density bonus is meant primarily to serve nonprofit affordable housing developers who might now be able to build affordable housing villages of sorts. “I’d love to see tiny home compounds around all our business centers and all over the city.”

Cottage housing and PRDs are the first of several actions the council plans to take to encourage infill. Later this year, it will debate legislation to loosen setback requirements and amend floor area ratio standards.

The new cottage housing and PRD ordinance takes effect on March 8. Of course, the new rules don’t mandate infill, they simply make it more feasible. But Stuckart’s got his fingers crossed that change is coming.

“We were blessed with too much space for too long and that allowed us to have [zoning] rules that were very suburban in nature.”