Private Rail Projects Show Promise, Though Not All Will Succeed – Next City

Private Rail Projects Show Promise, Though Not All Will Succeed 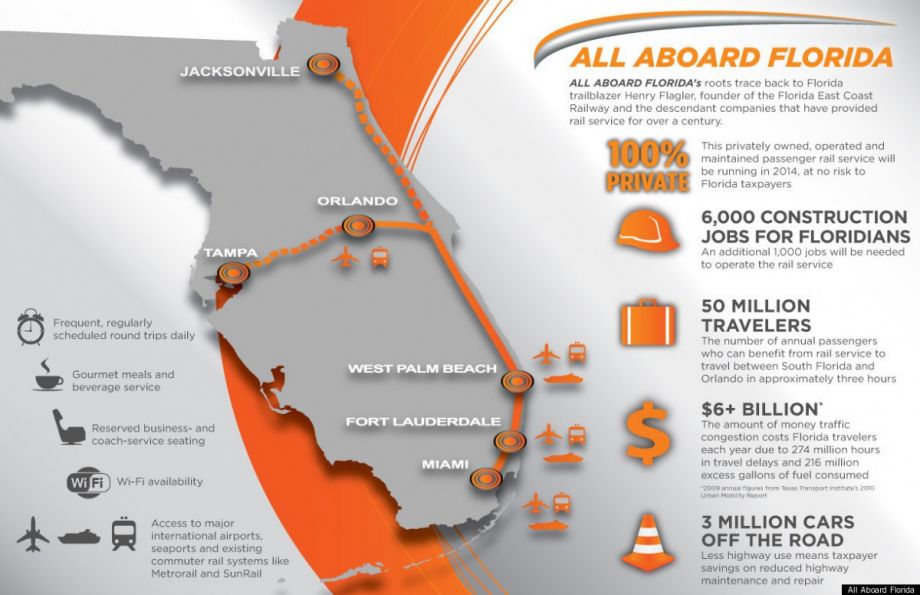 Credit: All Aboard Florida

Private and profitable rail is blossoming across the land, and Rail magazine has a feature on some U.S. projects, both established and expected, in its summer-fall issue. But while a few promising railways make the list, reading between the lines illustrates the pitfalls of trying to make a buck off a traditionally money-losing industry.

The first line the magazine looks at is Amtrak’s new service from Washington, D.C. to Lynchburg, Va.:

Even though the state of Virginia had set aside operating investment to support the new service, within its first full year of operation it brought in more than enough revenue to cover its operating costs. Today, the route still is operating in the black, drawing more than 172,000 passengers in 2012, an increase of more than 22,000 compared to 2011.

Paul Druce over at the Reason & Rail blog breaks down exactly how profitable — at least on the operating side of the ledger, not taking into account capital costs like railcar purchases and track maintenance — the service is. He found that in 2013, it was Amtrak’s second best performing line from a financial perspective, with a 135 percent operating cost recovery ratio. This puts it behind the Acela (177 percent) but above the slower Northeast Regional service (129 percent). Other Virginia routes perform well, too, with service from D.C. to Newport News coming next in profitability, followed by service to Norfolk (with 104 and 102 percent recovery ratios, respectively).

Next up on Rail‘s list is Florida East Coast’s All Aboard Florida service, to become the country’s first new private passenger rail service in half a century when it opens in 2015. It’s not yet clear what kind of construction subsidy Florida East Coast will seek, but the company has maintained that the service will operate with no government support.

Following All Aboard Florida is the Texas Central Railway, a partnership between JR Central (Japan’s flagship bullet train operator) and other investors, that seeks to raise $10 billion to build a line between the Dallas-Fort Worth Metroplex and Houston by 2020.

Aside from these hopeful, or already successful, projects come two with a bit less going for them. They’re both in California.

The state’s high-speed rail project started out hopeful, with the corridor between Southern and Northern California being one of the world’s last untapped markets for high-speed rail. Dan Richard, chair of the California High Speed Rail Authority (CHSRA), told Politico, “this project will throw off operating cash surpluses [which] then makes it very attractive for a private-sector operator to be able to come in and bid for the right to be able to operate the system.” This should happen without subsidies, as required by the ballot initiative that authorized bond sales for the project.

But if the project goes forward — some very consequential judicial rulings are expected in the coming weeks, which may throw a wrench in those plans — the CHSRA may have a bit more trouble finding a private operator than anticipated. JR Central and France’s SNCF were eager to get involved before construction started, choosing a route likely to make the most money (that is, a direct one). But the CHSRA instead chose a highly circuitous path through a number of small cities that private operators have warned could hamper the project’s eventual profitability.

“Simply put, the California High-Speed Rail Authority has a wish list, not a plan,” wrote French high-speed rail operator SNCF in a private presentation to the authority. “This lack of an investment-grade business plan is a deadly defect, particularly in a project that by law cannot rely on government subsidies for its operation and maintenance.”

For four years, penny stock company Las Vegas Railway Express has promoted its idea to restart rail service between the two areas using conventional equipment outfitted for a good-time ride, what it calls the X Train.

But in its second-quarter report filed Tuesday, the company disclosed that it had scrapped its previously announced strategy of raising $100 million to launch the service, including paying the Union Pacific Railroad $67 million to improve and expand its tracks between Las Vegas and Daggett, Calif.

As a result, the company forfeited a $600,000 deposit paid to Union Pacific last year.

Among many reasons why the proposal never looked all that sunny was the route. Its Southern California terminus would have been in Fullerton, easily an hour from Downtown Los Angeles in traffic, and even further to the Westside.

All Aboard Florida and JR Central’s Texas proposal are indeed promising, as are some of Amtrak’s new routes in Virginia. But the demise of the X Train and high-speed rail’s woes in California are a reminder that private passenger rail in America is still not a slam dunk, especially if you don’t get the crucial details right.