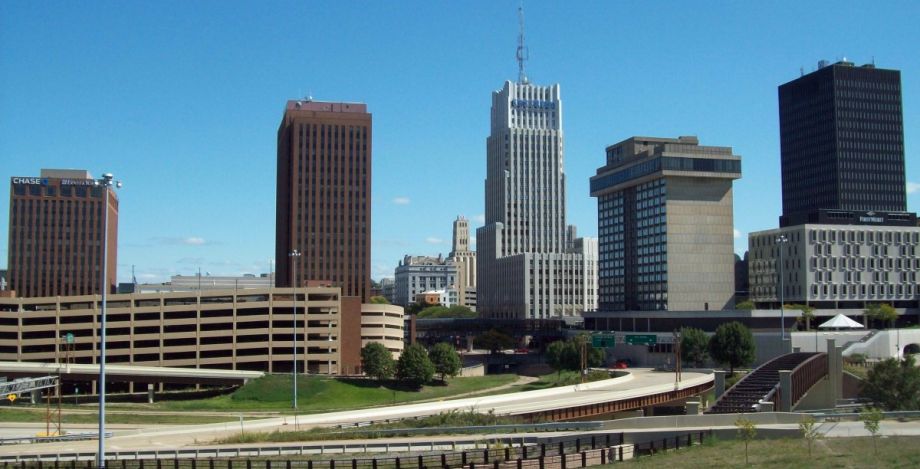 Akron was one of the 26 communities included in the Knight Cities Challenge. (Photo by Sleepydre)

Count another funding boost for the tactical urbanism movement. The John S. and James L. Knight Foundation announced the winners of the first Knight Cities Challenge today — with money going to innovators who hope to make a big community impact with one creative idea.

The projects include a program to train Detroit rehabbers to combat blight and reactivate vacant buildings, a subscription service that celebrates Akron with a monthly boxed selection of local goods, a newcomer welcome initiative that would present St. Paul newcomers with a warm winter hat, and porch swings for Charlotte’s public spaces.

“Not only did the Knight Cities Challenge uncover a wealth of new ideas to make our cities more successful, it will help strengthen a network of civic innovators who are taking hold of the future of their cities,” said Carol Coletta, Knight Foundation vice president for community and national initiatives. “These important connections will help create a pipeline for new approaches to city transformation and spark the type of collaboration vital to growing and spreading good ideas.”

Thirty-two of the 126 proposed projects will share the $5 million prize to make their visions a reality. Participants ranged from individuals, government and nonprofit groups, all looking to improve one of 26 target communities.

From the press release, here are some of the winners, from seven of the Knight cities:

Better Block International Hostel on Airbnb, $155,000 by Team Better Block (submitted by Jason Roberts): Turning a vacant property into an Airbnb hostel and cultural hub in Akron’s North Hill to tap the entrepreneurial potential of the neighborhood’s growing Bhutanese population.

Unbox Akron, $52,168 (submitted by Chris Horne): Fostering a stronger connection to the city by creating a subscription service that celebrates Akron with a monthly selection of local goods and experiences delivered in a box.

No Barriers Project, $67,100 (submitted by Sarah Hazel): Bringing two diverse neighborhoods together in a public park that sits on their border by creating a new common space that uses light, sound and play to stimulate conversation.

Take Ten Initiative, $74,000 (submitted by Alyssa Dodd): Challenging municipal workers to take 10 minutes each week to connect with a city resident and report on their thoughts and ideas.

Brick + Beam Detroit, $87,424 by Michigan Historic Preservation Network (submitted by Emilie Evans): Creating a new community of Detroit rehabbers who will work together to combat blight, reactivate vacant buildings and improve their city.

Detroit Homecoming, $100,000 by Crain’s Detroit Business (submitted by Eric Cedo): Engaging Detroit expats with a new digital community designed to keep them connected to Detroit and its opportunities.

LIVE Detroit, $40,000 by LIVE Detroit (submitted by Rachel Perschetz): Attracting and retaining residents by creating a center for information about Detroit neighborhoods and city life that showcases the best of Detroit.

The Pop-Up Pool Project, $297,000 by Group Melvin Design (submitted by Benjamin Bryant): Introducing fun, easy solutions at city pools, which will be designed to make them more vibrant places to meet and interact with neighbors and friends.

Urban Arboreta, $65,000 by City Parks Association of Philadelphia (submitted by Timothy Baird): Transforming vacant land in Philadelphia into urban forests that produce trees to be replanted on city streets and in parks.

DIG Philly by The Big SandBox Inc., $149,050 (submitted by Jacques Gaffigan): Bringing together members of the community from diverse ages, ethnic and economic groups to create a movement to reinvent schoolyards across the city using traditional grassroots outreach and new digital engagement tools.

San Pedro Squared, $139,000 by San Jose Downtown Association (submitted by Scott Knies): Testing a new method of economic revival focused on bringing activity to the streets by installing pop-up retail units on the ground floor of a parking structure opposite the lively San Pedro Square market.

4 Play, $117,000 by Greater MSP (submitted by Peter Frosch): Changing the way people perceive the city and its climate by inviting all residents to come together for an outdoor activity—whether it’s ice fishing or summer canoeing—once per season.

8-80 Vitality Fellow, $175,000 by Mayor’s Office, City of St. Paul (submitted by Mayor Chris Coleman): Promoting a more livable St. Paul by embedding a fellow in the mayor’s office who will work across departments to manage the $42 million committed to the mayor’s 8-80 Vitality Fund, which aims to ensure that walking, biking and public spaces are a priority in all city projects.

Rolling Out the Warm Welcome Hat, $67,288 (submitted by Jun-Li Wang): Welcoming newcomers by having city leaders hold monthly ceremonies to give them an official welcome gift, a warm hat for Minnesota winters.

You can find the complete list of winners here.