In L.A., Magnet Schools Attracting Students but Not Headlines – Next City

In L.A., Magnet Schools Attracting Students but Not Headlines 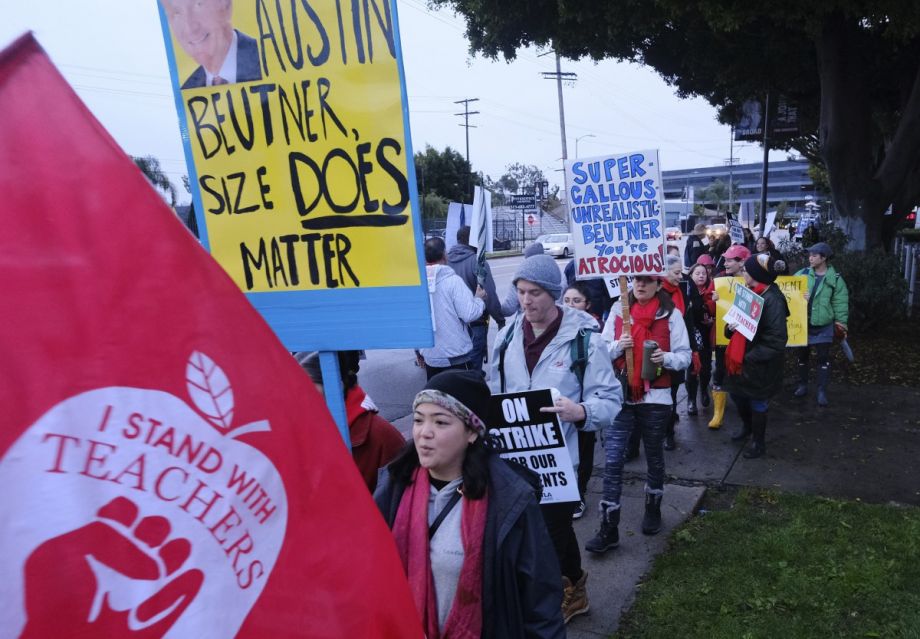 Parents, teachers and students carry signs and picket in front of Hamilton High School in Los Angeles during a city wide teacher strike on Wed. Jan. 16, 2019.16 in Los Angeles. The Los Angeles teachers strike has entered a third day. Teachers are on the picket lines and rallying under rainy skies outside a high school. (AP Photo/Richard Vogel)

When tens of thousands of Los Angeles teachers went on strike last month, the media focused its attention on educators’ concerns over wages, class size, support staff, and the future of charter schools in the city. While they didn’t make the headlines or even the pithy posters teachers carried around throughout the six-day labor stoppage, magnet schools were another point of debate between the union and the District — and they matter to understanding the direction of school policy in L.A.

Magnet schools are schools organized around a certain theme, like art, technology, or even healthcare and journalism. Sometimes they’re an entire school, and sometimes they’re a program within a traditional school. In L.A., magnets are very popular: more than 79,000 students attend one of the city’s 260 magnet schools and programs, with enrollment having grown 35 percent in the last five years. Thirty-six new magnets opened this school year, and 37 new ones are set to launch in September.

One reason they’re in such high demand is due to their reputation for being academically strong. L.A. magnet students generally score higher on state exams than those both in traditional public schools and charters.

“Over time we have recognized that magnets are a choice for families and the magnet brand is very popular,” says Mónica García, the president of the L.A school board. “We have many schools with waiting lists and we want to work to accommodate them.”

The first magnets in L.A. opened in 1977, as part of a court-ordered desegregation plan. Magnets are open to all students living within the city, and at least half of a magnet’s student body typically comes from outside the school’s zoned neighborhood. The idea is to create appealing schools that will attract students — a “magnetic” way to foster diversity. The first magnet schools in the U.S. cropped up in the 1960s, specifically for school integration.

Gary Orfield, the co-director of The Civil Rights Project at UCLA, was involved back in the 1970s when the city’s magnet program was originally established.

“The vast majority were created for desegregation, but they lost that focus since the U.S Supreme Court’s [Oklahoma City v. Dowell] decision in 1991,” Orfield says. “Magnet schools were designed to be much more autonomous than traditional public schools, but they also had strict civil rights policies, which charters never had.”

Today roughly a quarter of L.A. magnets are desegregated, according to the L.A. School Report.

Given their popularity and performance, local officials have viewed expanding magnets as a key strategy for keeping families enrolled in Los Angeles Unified School District. Enrollment in the district has been declining since 2002 partly because families have left for charters. (About 112,000 students currently attend charter schools that are independent of the city’s school district.) Unlike charters, L.A.’s school district doesn’t lose per-pupil funding when a student enrolls in a magnet.

But magnets emerged as a tense area of disagreement during the union contract negotiations. To convert to a magnet, a majority of teachers at a school must vote in favor of the change, and then all staff must reapply for their jobs at the new magnet if they want to stay. Sometimes school leaders decide they need to hire different people with a more specialized skill-set to accommodate the new school theme. If an educator is not selected to come back, they could then seek a transfer to a different school.

In a letter sent in July, in response to the union’s “Last, Best, and Final Offer,” the school district’s Director of Labor Relations wrote that they “fundamentally disagree” with the union over this, and believe the union “want[s] to effectively limit the number of new magnet schools and limit the District’s ability to select teachers with special skills or talents for new magnet schools.”

In the end, the union lost that battle. In their new contract — which essentially codified the district’s existing policy — it says that if the school board approves a magnet conversion, all teachers must receive notification “no less than one calendar year” prior to the magnet opening. That way educators could seek specialized training in the focus area of the magnet to be “priority candidates” for hiring, or they could seek a voluntary transfer. A majority of teachers — not 60 percent — also have to vote in favor of magnet conversion for the school board to consider the application.

Caputo-Pearl says one problem with magnets is that they’re “the flavor of the day” for the school district. “Instead of investing in schools appropriately and doing things that matter like having administrators collaborate with teachers and parents on school improvement programs, the District falls into this game of changing names — and now it’s magnets,” he says. “Magnets can and should play a role, but not an oversized role.”

García, the school board president, says she and her colleagues take seriously that the “magnet brand is recognized as high-quality” by families. She emphasizes the District is interested in supporting all different kinds of school choice, including dual-language schools, charters, pilot schools, themed schools, and traditional comprehensive schools.

Challenges remain to expanding magnets further in the city.

One problem is the complicated, byzantine admissions process that has made it harder for some families — especially Latino families — to enroll in magnets.

“That’s something we definitely intend to begin raising more frequently and louder,” says Katie Braude, the executive director of Speak UP, a parent organization in Los Angeles that supports school choice.

Orfield of The Civil Rights Project at UCLA also notes there can sometimes be steep start-up costs for good magnets, requiring as much as a ten percent budget increase to get them off the ground. “There are other costs,” he says. “A good magnet requires a commitment to invest and train people to offer distinctive programs, and of course magnet schools that are run under good civil rights policies have to offer transportation.”

Braude says the public has to ensure the school district doesn’t just convert schools to magnets without really giving them the resources to succeed. “Magnets have such a cachet,” she says, “But you can’t just slap the magnet name on something.”