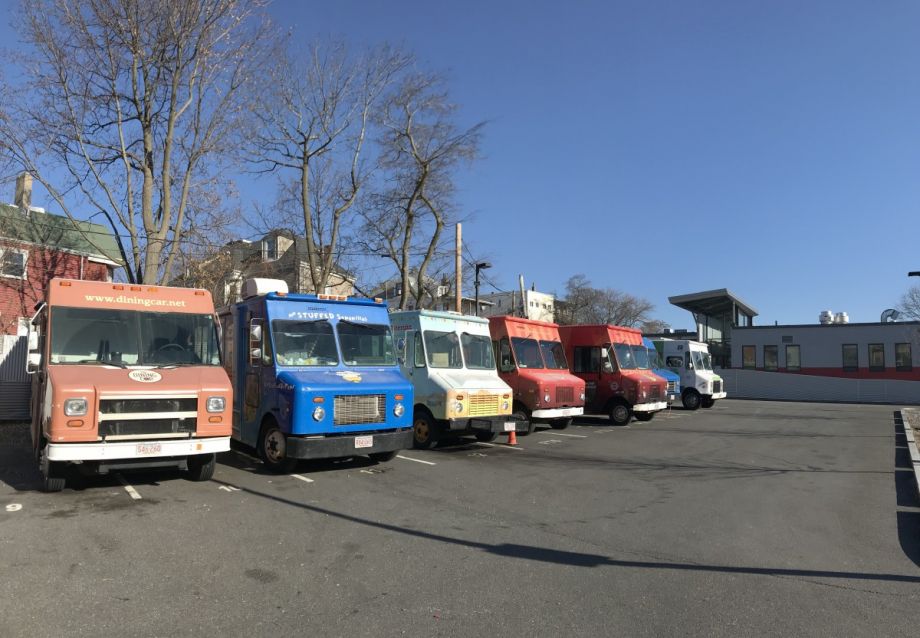 Food trucks lined up at their commercial kitchen base, CommonWealth Kitchen in Boston's Dorchester neighborhood. (Photo by Oscar Perry Abello)

The food truck industry, already an $800 million industry, is expected to grow another 20 percent in 2019, according to a new report.

The Mobile Food Trends Report — by food-truck consultancy Off the Grid — lays out the case that food trucks are transforming how people eat across America.

Off the Grid helps organize food-truck gatherings in San Francisco (which, CEO Matt Cohen told Forbes, was actually illegal when the company first launched) and works with 300 vendors. The company surveyed its food providers and found that of the entrepreneurs it works with, 30 percent are immigrant-owned, and an equal number are woman-owned. Another 8 percent are owned by members of the LGBTQ community and 2 percent are owned by veterans.

(It’s unclear how or if these demographic statistics are mirrored in the food-truck community nationwide. One document from the U.S. Chamber of Commerce says that 80 percent of food-truck owners in Chicago are minorities. Nationwide stats are harder to find.)

The report also tackles food trucks’ ability to create or enhance public spaces. Off the Grid profiles a handful of its own placemaking activities that have drawn people to new spaces and revitalized public spaces. The Oakland Museum of California, for example, started staying open late on Fridays and offering live music and food trucks. “Friday Nights at OMCA is perhaps the biggest game-changer for the museum,” director Lori Fogarty said in a statement.

It’s important to note that food trucks weren’t invented in the late aughts. Entrepreneurs — many of them immigrants and people of color — have been dishing out hot dogs and tacos for years. Some sources trace the taco truck back to Raul Martinez Sr., who turned an ice cream truck into a tacos al pastor stand in 1974; the concept is undoubtedly older.

But it’s also worth noting that the current boom in food trucks is somehow different. In Washington, D.C., a byzantine depot system restricted the food truck scene for years — until it didn’t. As Julian Agyeman, an urban policy professor who has studied food trucks’ impact on cities, pointed out in a blog post, food trucks are “a powerful affirmation of pop-up urbanism.” They are spaces “where ordinary people, not urban planners, create moments in time and space that capture the popular imagination, and of what we call cultural place-making.”