Cracks in the Curitiba Myth – Next City

Cracks in the Curitiba Myth 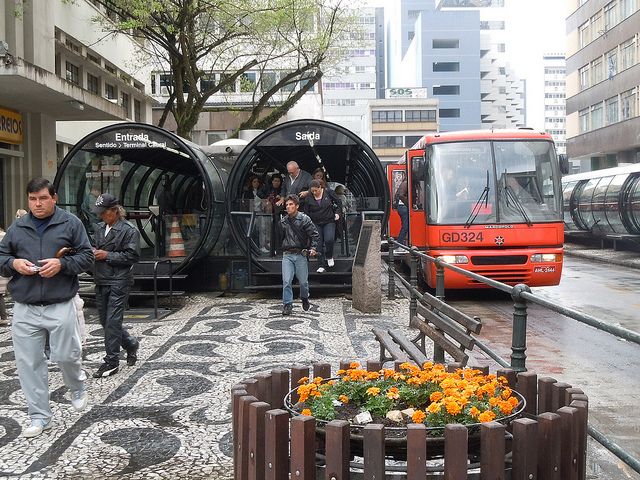 Curitiba is famous for a first-of-its-kind bus rapid transit system, though critics say it unfairly penalizes lower-income people in the suburbs. Credit: whl.travel

Curitiba, the capital city of the Brazilian state Paraná, has long had a reputation as the Portland of the southern hemisphere: Clean, green, transit-oriented and with a high quality of life. Indeed, in 2010, the same year it won ITDP’s Sustainable Transport Award and the Swedish Globe Sustainable City Award, the Economist Intelligence Unit’s Latin American Green City Index called Curitiba “a long-time sustainability pioneer in the region” and “the clear leader in the index.” Its plethora of parks, first-of-its-kind bus rapid transit system, recycling-for-food program among the urban poor, and creative repurposing of industrial sites — like a former rock quarry that became the ethereal setting for an opera house — are well-known symbols of Curitiba’s global brand as South America’s antidote to the polluted, overcrowded megacity spotted with favelas.

When the city hosts four World Cup matches next year, this will surely be the image that TV commentators share with their audiences. But just as soccer’s quadrennial tournament raised Brazilians’ ire during June protests, Curitiba is also bearing its brunt of criticism related to the tournament. Earlier this month, a judge halted further renovations to the Joaquim Américo stadium due to safety issues. Meanwhile, the People’s Committee for the Cup has documented concerns about infrastructure projects, including airport expansion, a highway widening project between the airport and downtown, and the stadium and its environs. The Committee has expressed dismay about shady accounting and the use of eminent domain to relocate low-income families.

With its World Cup renewal plans, Curitiba resembles yet another Pacific Northwest city. Vancouver likewise is known for its exceptionally high quality of life, but earned sharp criticism when hosting the 2010 Winter Olympics for its treatment of the city’s homeless population. Curitiba doesn’t have hundreds of Rio-style favelas that it will relocate in advance of the world’s media, but its 4,000 homeless are being steadily shunted away from main areas where soccer fans will stay.

The Cup concerns come on top of longer-standing issues. Despite its reputation for BRT, Curitiba has the highest vehicle ownership rate per capita of any Brazilian capital city: 0.63 cars per resident, more than twice the national average of 0.27. In essence, it is a victim of its own success, as urban planning innovations in the 1970s and ’80s have made it one of Brazil’s richest cities, with the country’s second highest human development ranking and largest percentage of upper-class inhabitants. But even with a bus system that has become the locus classicus for cities around the world, wealthy Curitibanos still prefer the comforts of a new car.

The Curitiba success story has also drawn poorer Brazilians from across the country who have contributed to the metropolitan area’s growth rate of 3.11 percent in the 1990s and 1.36 percent in the 2000s — faster than the Brazilian average. Metro Curitiba has just more than 3 million people, while Curitiba proper has about 1.8 million. However, while the region grew by 42,000 families between 2008 and 2009, it only generated 20,000 new housing units. This deficit is an endemic problem in greater Curitiba. As of May, 74,000 people were on the waiting list for housing provided by Cohab, the city’s housing authority.

Thus far, maintaining Curitiba’s high quality of life has meant neglecting other, more basic services. As Darci Frigo, co-founder of Curitiba-based NGO Terra de Direitos, lamented at a recent Ford Foundation roundtable, “The city spends more on landscaping than it does on housing.”

Frigo is a public interest lawyer whose organization works on socio-spatial equity issues in urban areas, the rights of Afro-Brazilians, and supporting biodiversity in the face of GMOs. He was quick to provide a counter narrative of Curitiba’s progressive planning history, pointing out that legendary mayor and later governor Jaime Lerner was in fact appointed by a military dictatorship, and that the suspension of democratic rights facilitated his early interventions in the city’s streetscape. “It was a planning model that privileged certain groups,” Frigo said, “a technocratic approach without participation.”

He even took aim at Curitiba’s sacred cow, the BRT system, criticizing how it terminates at the city limits rather than crossing over into the poorer suburbs. While suburban bus lines pick up passengers at BRT terminuses, there is no integrated fare system, which means lower-income commuters who live farther away from the central city end up paying more for their ride. “It’s very hard to get Curitiba to cooperate with the metro area,” Frigo said. That’s a far cry from its northern hemisphere counterpart, where Metro, the elected regional government for the Portland area, is often cited as a model.

Currently, Curitiba is revising its master plan, last updated in 2004, for another 10 years. Terra de Direitos has agitated for more progressive measures, like establishing special low-income housing zones, the provision of rental housing vouchers to low-income residents, and land tenure regularization for squatters. Meanwhile, Frigo said, the business community is already influencing the process to allow further density without adequate infrastructure to support it. The Curitiba Urban Planning and Research Institute, which oversees the master plan revision process, did not provide comment by press time.

“But if the city council doesn’t make changes,” Frigo said, “Next year the protests are going to be even more intense.” The convulsions that have shaken Brazilian society over everything from public transportation to education to health care to political corruption are, in short, no exception in Curitiba. Under its carefully manicured surface lie many of the same tensions so prevalent in Brazil’s more complicated metropolises.