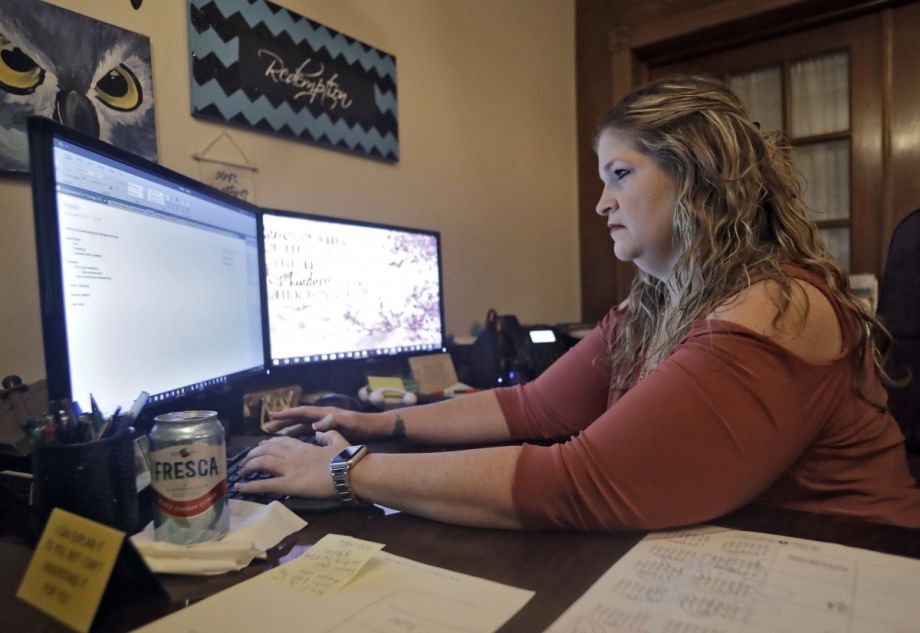 Coral Nichols, vice president and co-founder of Empowered to Change Inc., works in her office in Seminole, Fla. Nichols is one of around 1.4 million Floridians who stand to get their voting rights back after passage of Amendment 4. (AP Photo/Chris O'Meara)

County election supervisors “expressed frustration with the lack of direction from the state” at a conference about the issue, the Herald-Tribune said. State officials did say that they are not sending new convictions data to local elections officials for now, but what will happen after Jan. 8 is unclear.

Amendment 4 was approved by 65 percent of Florida voters and “automatically” restores voting rights for convicted felons if they have completed their sentences, fulfilled probation requirements and paid any restitution and court costs. The amendment excludes murders and felony sex offenders but is expected to enfranchise 1.4 million people.

Among the concerns are definitions of words in the amendment. State Division of Elections director Maria Matthews told elections supervisors at the conference, Law.com reports, that it’s not always obvious when a sentence is completed, for example. Sentences can be converted to “civil judgments,” Matthews said.

“That’s why we need this time to research it and make sure that we are providing the appropriate guidance as to what do these terms mean and how to implement the will of the people, which was their intent that, if someone has completed their sentence, that they should be able to register to vote. And that’s what we’re going to do,” Matthews said.

Secretary of State Ken Detzner, who was appointed by Republican Gov. Rick Scott, said it’s up to the Legislature and the Board of Executive Clemency to provide guidance on the amendment, Law.com said. The Florida legislature does not convene until March.

Cecile Scoon, team leader on the League of Women Voters of Florida’s Amendment 4 campaign, told the Herald-Tribune there is no need for the legislature to weigh in.

“It would be an intrusion into the will of the people to enact any enacting legislation,” she said. “It doesn’t require any and that would be challenged most likely, legally challenged.”

Some counties could interpret Amendment 4 differently from others, which could trigger lawsuits, the Tampa Bay Times added.

And Monroe County Supervisor Joyce Griffin told the Tampa Bay Times that she worries that some felons may accidentally improperly register to vote, which is itself a felony. The registration form says: “I affirm that I am not a convicted felon, or if I am, my right to vote has been restored.” It does not mention probation and restitution, which Amendment 4 requires. Griffin says she worries some felons might check the box mistakenly. “We’re setting people up. I’m frightful for those people,” she told the paper.

Liza McClenaghan, Florida state chair of voter advocacy group Common Cause, said the state is throwing up new roadblocks by insisting the legislature take a stand. “Why did we have a constitutional amendment in the first place?” she asked. “Because the Legislature wouldn’t deal with the issue. The people took care of that by creating a self-implementing amendment. It’s a curious situation.”

Assuming that the initiative does take effect immediately on Jan. 8, one former elections official is urging felons not to wait to register. Jerry Holland, former Duval County supervisor of elections, told Action News Jacksonville that “with 1.7 million potential voters, and how many we don’t know will actually go and register,” the time for the state to verify the felon’s eligibility might take some time. “The worst is to wait 29 days prior to the election and do it on the final day,” he said.