Cambodia Suspends All Traffic Enforcement to Butter Up Voters – Next City

Cambodia Suspends All Traffic Enforcement to Butter Up Voters 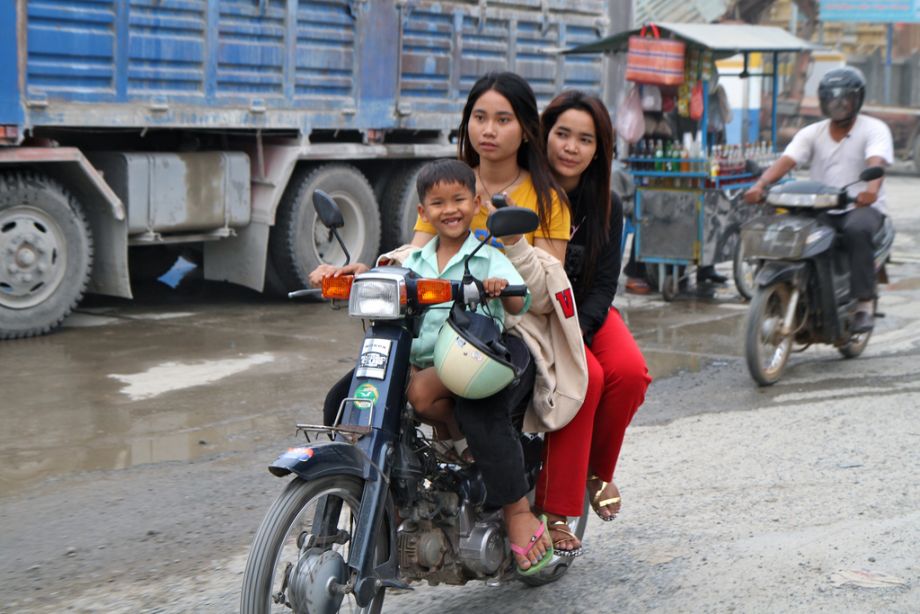 Traffic enforcement in Cambodia is lax — or, in advance of a crucial election, nonexistent. Photo credit: Jason Eppink via Flickr

Today, Phnom Penh’s once-serene streets are jam-packed with an exhaust-spitting, engine-growling, horn-honking sea of motorbikes, tuk tuks, cars and SUVs. Nervous cyclists and rickshaw drivers hug the pockmarked curbs while pedestrians dodge motorbikes, which race down the sidewalks with impunity. Luxury SUVs plough through red lights and gridlocked intersections, tailed by clusters of remora-like motorbikes. Ancient Toyota sedans barrel into oncoming traffic on one-way streets with kids climbing across their dashboards. There are overcrowded minivans with teenagers riding on their roofs, trucks with standing garment-factory workers squeezed into their beds like cattle, ambulances with sirens blaring and no one getting out of their way, and three-wheeled tuk tuks dodging dogs, children and food vendors who have set up their carts directly in the street.

As for the police, nowadays you’ll find them in their faded blue uniforms, lounging on the backs of motorcycles parked in the shade. They could be napping, or they might be watching the road, wishing they could get up and fleece drivers for infractions, real or imaginary. But they can’t, because since June, Cambodia’s police force has been under strict orders not to fine anyone for anything – a fortuitously timed gesture to the people of Cambodia from their increasingly unpopular government in advance of a July election.

“In Cambodia, traffic accidents are the leading cause of death for people aged 15 to 45,” says Ear Chariya, road safety program manager at the Cambodian office of Handicap International (HI). “Road crashes are killing our society’s most productive age group.”

The moratorium on traffic enforcement couldn’t come at a worse moment. According to data compiled by HI and the Cambodian government, 1,966 people died on Cambodia’s roads in 2012, and 5,349 were severely injured. But preliminary data shows that 2013’s numbers will be even higher, and sharply so. Most of the deaths occurred in Phnom Penh and on the highways that lead into the city, and HI estimates that road accidents cost Cambodia some $329 million in 2012.

Traffic deaths have been rising steadily in the country over the past several years. The 2012 figure, for example, is a 34 percent increase over 2006 – even though Cambodia’s population only grew by 11 percent in this same period. Chariya, whose work encompasses education, advocacy and data collection, believes that recent road upgrades across the country are leading to faster driving, and in turn, more fatalities. More than half of all 2012 road deaths involved speeding, Chariya says. Few people, moreover, know (or follow) the rules of road. According to Chariya, only one out of five Cambodian drivers have legal driver’s licenses, and of this number, 70 percent simply purchased them without undergoing any tests or training.

Drunk driving is also becoming increasingly commonplace. “Almost half of all road fatalities in Cambodia involve drunk driving,” Chariya says. “Drunk driving has become part of our culture… In some districts in Phnom Penh, for example, police don’t set up drunk driving checkpoints because local authorities are getting money from restaurants.”

Even if traffic laws were being enforced today, existing legislation remains fraught with problems. For example, only those in the front seat of cars are required to wear seat belts, and only those driving motorcycles (i.e. not passengers) are required to wear helmets. There are no helmet safety standards in place in Cambodia, nor are there any restrictions on the number of people allowed on a motorcycle. According Chariya, 80 percent of all Cambodian road fatalities in 2012 involved people on motorcycles. Only 22 percent of those killed on motorcycle died with helmets on their heads.

If the police do catch you without a helmet, the fine equals about 75 cents – a laughable sum even in a poor country like Cambodia (though traffic police will always try to squeeze more money out of you). With police rarely working past 6 p.m., few motorcyclists wear helmets at night. Drunk driving increases after dark as well, making Cambodia’s roads particularly dangerous after sunset.

Perhaps the most troubling thing about Cambodia’s roads is the high number of hit-and-runs. Chariya estimates that at least 50 percent of all drivers flee the scene of fatal accidents, either because they don’t want to compensate their victims, or because they are afraid of being attacked by angry mobs. Less than one-tenth of serious road accidents result in court cases, and generally speaking, the families of crash victims usually opt to take out-of-court settlements if they’re offered. In a November case, for example, a man accepted about $1,000 after a senior government official’s SUV hit the bike he was driving, seriously injuring the man and killing his pregnant wife. The SUV kept driving, and the money was only delivered after the story got out. No charges were pressed. Chariya believes that hit-and-runs would decrease if personal vehicles were required to have insurance. According to Chariya, only about one percent of Cambodian drivers are insured.

“To improve road safety, education, awareness and law enforcement must go together,” says Lim Sokchea, executive director of the Coalition for Road Safety (CRY). CRY, a local NGO, invests most of its time in educating university students about traffic laws and road safety. “They all know the laws now, but they still don’t wear helmets – especially at night. They don’t want to change their behavior.”

Sokchea explains that strict law enforcement and high fines in neighboring Vietnam – a country with a similar economic standing – means that Vietnam has significantly fewer road fatalities and accidents than Cambodia.

“People aren’t afraid of education,” she says, “but they are afraid of the police.”

For its part, the Cambodian government released a National Road Safety Action Plan in 2011. The plan’s stated aim is to reduce the number of road fatalities in the country by 30 percent by 2020. So far, little has been done to implement this goal. A comprehensive new traffic law, meanwhile, is currently being reviewed by the government. This law, which HI helped draft, would limit the number of passengers on motorbikes, make helmets mandatory for all riders and see all fines increased fivefold. Chariya hopes that the law will come into effect by the end of 2014.

In the interim, and as long as Phnom Penh’s traffic police remain lounging in the shade, the city’s streets will continue to become increasingly dangerous.

“If no action is taken, at the current rate, 3,200 Cambodians will die in road accidents in 2020,” Chariya says. “The government must act now if it wants to save lives.”