L.A. Turns to the Stone Age to Tackle Water Problem – Next City

L.A. Turns to the Stone Age to Tackle Water Problem 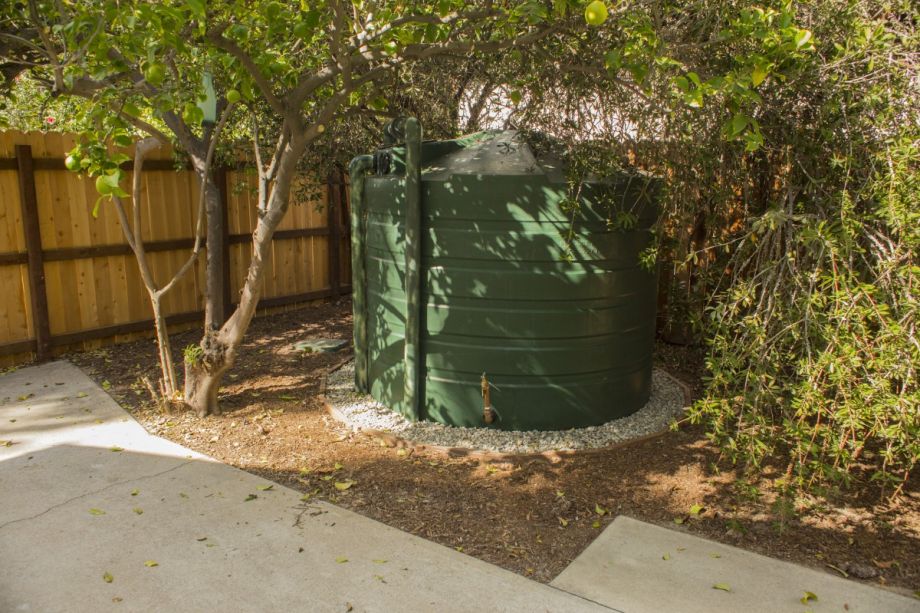 A StormCatcher cistern at the first pilot home in North Hollywood (Credit: TreePeople)

Amid California’s ongoing drought, Los Angeles is testing a stone-age technology with a modern spin: cisterns that are connected to the cloud.

Through the StormCatcher pilot program, about a half-dozen private homes are getting cisterns, as well as infiltration-friendly landscaping and rainwater capture retrofits. Rainwater from each property will be diverted into “smart cisterns” connected to a cloud-based software. If rain is in the forecast and the cistern is full, the program will slowly release water into the newly bioswaled yard, making space for the coming storm.

“It’s an old technology but a new mindset,” says Deborah Bloome, senior director of policy for TreePeople, a long-established L.A. nonprofit with a mission to increase collaborative governance around environmental issues.

Last year, to encourage a more systems-based approach to stormwater management, TreePeople brought three of Los Angeles’ water-related agencies together to collaborate, the Department of Water and Power (LADWP), the Bureau of Sanitation (LASAN), and the County Flood Control District (LACFCD)

“We all have a very common interest in stormwater,” says Marty Adams, senior assistant general manager for the water system at LADWP. “But we all have a little different responsibilities for it.”

The LACFCD mitigates flooding; LASAN aims to keep pollutants picked up by stormwater out of rivers and the ocean; and the LADWP maintains the drinking water supply.

“TreePeople has worked as the glue between [agencies],” says Adams. It tasked each agency to ask, “What can we do to meet our goals in a more collaborative way?”

The StormCatcher cistern program is the first time these three agencies are collectively planning, funding, implementing and monitoring a cradle-to-grave stormwater system that meets all of their mandates.

“This was a chance to really focus on doing some specific projects that didn’t really fall into any one shop but collectively they fell into all of our shops,” says Adams.

Retrofitting homes with cisterns and permeable landscaping could keep stormwater out of drains, reducing flooding; prevent pollutants from flowing into water sources; and generate more groundwater and provide homeowners with personal water supplies, reducing the city’s dependence on imported water — if the program can be scaled.

The first retrofitted home was unveiled earlier this month. Homeowners participating in the pilot are receiving the cisterns for free. The basic system, including gutters, pipes, installation and landscaping, costs about $3,000. The cloud-based weather software costs about $5,000 on top of that. Bloome says the small test will help determine whether the high-tech system can be replicated more widely. The collaborative is also working to create a cistern rebate program through the LADWP, similar to the rebates homeowners receive from installing rain barrels.

Two pilot properties getting more robust retrofits will hopefully capture 100 percent of stormwater — runoff not only from the roof, but also from other impermeable surfaces like driveways and pathways.

Approximately six more houses — in San Fernando Valley, and downtown and south L.A. — will be set up to participate by the end of the year. Homes were analyzed for geographic and hydrogeological criteria — all of the sites receive approximately the same amount of rainfall — and homeowners were screened for their willingness to commit to maintaining the systems. TreePeople also conducted outreach to ensure that the candidate pool was diverse, and represented disadvantaged communities. More than 100 applications were submitted for fewer than 10 slots.

The pilot will assess whether or not Angelenos can commit to a program like this, says Bloome. Homeowners will be able to use their cistern water for irrigation purposes, reducing water bills.

Currently 50 percent of Los Angeles’ potable water is used for outdoor irrigation purposes, says Bloome. If homeowners can switch to using their own collected rainwater, they’d not only save money, but also reduce the need for the city and county to import water from Northern California and the Colorado River.

Guidelines are also currently being drafted for use of collected rainwater indoors. Bloome hopes they’ll be done by the end of the year.

And what a year it will be. A predicted powerful El Nino weather pattern is expected to bring much-needed rain to California this winter, but the water won’t be of much help if it doesn’t stick around.

“[Los Angeles is] built to get rid of stormwater quickly, for good reason,” says Adams. “But we’re thinking differently now.”

The LADWP has been working to capture more stormwater on public property, like parks, and from large impermeable surfaces, like school playgrounds. Including private property owners in rainwater capture vastly increases the potential water supply. Not only will cisterns create personal water bank accounts, but more permeable landscaping will send more water percolating down into the ground.

“By 2024, we want a quarter of the water we supply to come directly out of the groundwater under Los Angeles,” says Adams. Today, about 12 percent does, but the agency is constantly fighting contamination in its existing wells.

Adams and Bloome say a project like this increases all parties’ awareness of the life cycle of water. With agencies collaborating, “You end up with better projects, projects that are more inclusive and more beneficial,” says Adams, and better “optimize the use of the public’s money.”

Bloome says Angelenos will also be encouraged to engage in their water use, not just what comes out of their tap but also what falls on their property, making every citizen “their own personal watershed manager.”