Walking Through the Art of “Black Radical Brooklyn” – Next City

Walking Through the Art of “Black Radical Brooklyn” 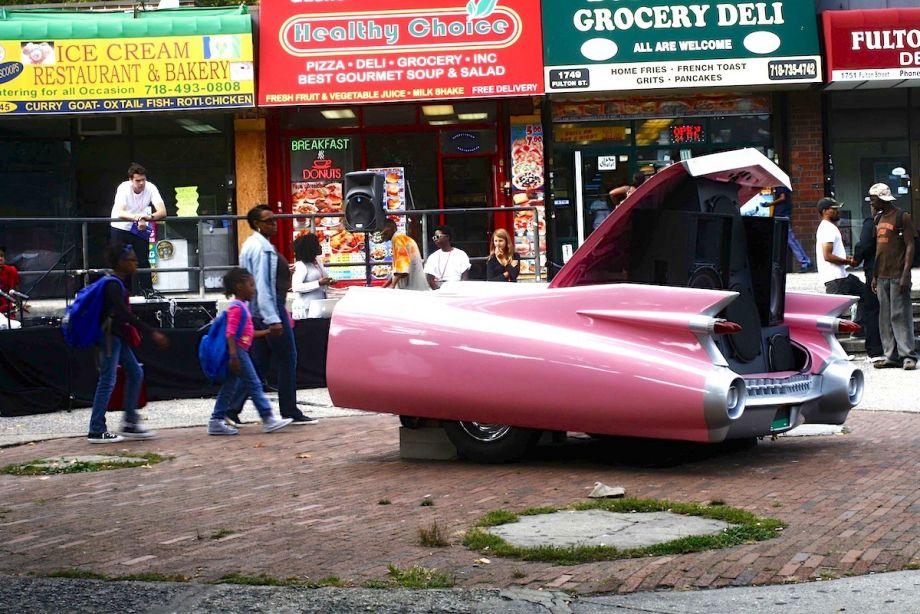 You could tell it would be a while before the deejay was going to get much response from the crowd at the opening party for “Funk, God, Jazz and Medicine: Black Radical Brooklyn” at the Weeksville Heritage Center in Crown Heights. That’s how it goes for deejays: the long wait until people are ready to get into it. I got there just as he was switching the music on at 2 p.m., on the center’s grounds.

Weeksville — an African-American cultural institution dedicated to preserving the legacy of one of the first independent communities of freed slaves in America — opened itself this past Saturday to the community and the art world to kick off a walkable exhibition produced in collaboration with Creative Time. Four art commissions, by Xenobia Bailey (the “Funk”), Bradford Young (the “God”), Otabenga Jones & Associates (the “Jazz”), and Simone Leigh (the “Medicine”), are on display at four sites, not far apart. The pieces are meant to be inspired “not only from [Weeksville’s] story — achieving self-determination through the claiming and holding of a neighborhood — but also from radical local battles for land and dignity from the 1960s to today.”

Not far from where a workshop on spinning yarn from rabbit fur had just wrapped up, independent curator Rashida Bumbray explained to me that Saturday’s celebration was aimed at finding “a way for [the community] to become ambassadors for the project.”

Young’s space, the “God” location, is at the former P.S. 83, which is now owned by the Bethel Tabernacle AME Church across the street. When I arrived, about as many people were out front on the street talking about going in or about coming out as there were inside. The space is rundown enough that I had to sign a waiver to enter.

Inside, in a mostly dark room with a panel at one end, we all sat in church pews placed inside the former school. On three separate screens, the images of the installation, called “Bynum Cutler” and “a tribute to the pioneering black women, men and children who embarked on countless journeys in search of refuge,” were projected in sharp black and white while cinematic orchestral music played.

Bailey’s piece, “Century 21: Bed-Stuy Rhapsody in Design: A Reconstruction Urban Remix in the Aesthetic of Funk,” which she made with the Boys & Girls High School, is inside of one of Weeksville’s historic homes. Each site has a recorded artist statement, and I dialed in to learn that “Century 21” is meant to be the home of an artist couple who furnished their apartment with repurposed, discarded materials. Bailey, who was there on Saturday sporting one of her signature crocheted hats, worked with the high-school students to create this fictional place from found materials. She was the only artist I saw on site at any of the locations.

At the corner of Fulton Street and Utica Avenue, a ’59 Cadillac Coupe deVille — well, half of one — sits out front of a strip of shops facing a semi-circular concrete courtyard. A radio station, OJBK-FM, created just for the exhibit in collaboration with the Central Brooklyn Jazz Consortium, pipes out from a trunk full of speakers. Otabenga and Associates’ sound sculpture is a reference to the X Clan album cover for “To the East, Blackwards.”

Volunteers — women dressed in a sort of period nurse’s outfit — were guiding guests around Simone Leigh’s “Free People’s Medical Clinic,” which was made in collaboration with Stuyvesant Mansion. The space is now home to several community organizations, but it was once the office of New York’s first black female OB/GYN, Susan Smith McKinney Steward. Different treatments, such as blood pressure screening, are available at the exhibit. Maybe six people were participating in Aimee Cox’s black folk dance class. Another six or so crowded at the entrance of the room to watch. Two little girls leaned against their mom, a look of wary curiosity on their faces.