Atlanta’s Westside Picks Its Own Social Entrepreneurs – Next City 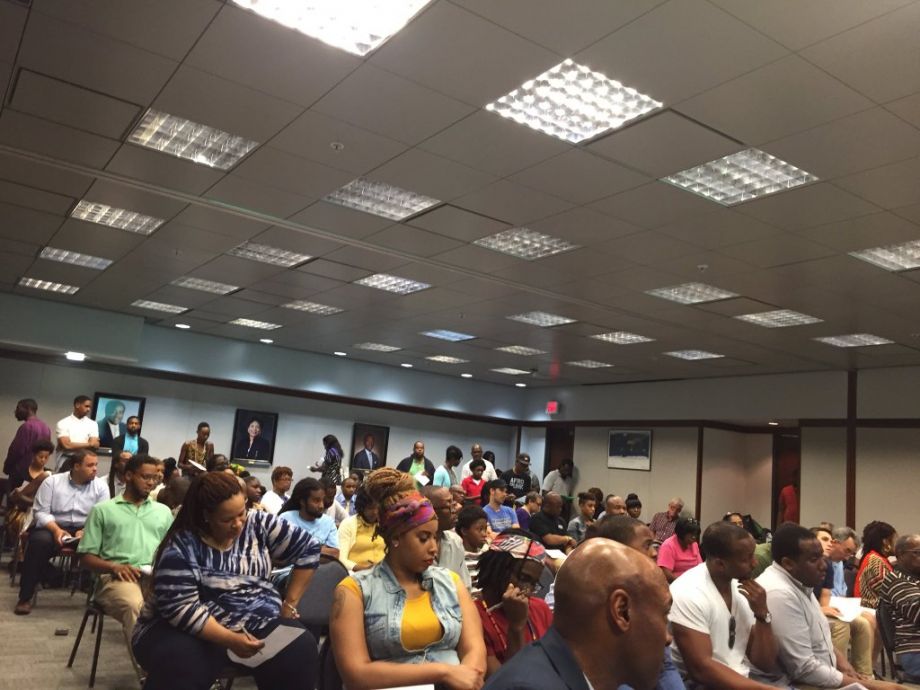 A packed crowd of Westside residents helps to select the best of social enterpreneurs from their communities. (Credit: Center for Civic Innovation)

Lateef Pyles knew at an early age that he wanted to style hair.

“After going to the barbershop for a few years, I decided that the concept of cutting a fade was something that I was enamored with,” he says. “So I decided to buy a pair of clippers at the age of 12 and started to tear my brother’s head apart.”

Pyles worked on his little brother’s hair until he had enough confidence to go to his neighbors and charge them $5 for a haircut.

Today, Pyles is one of five tonsorial artists (aka barbers) at University Barbershop on Atlanta’s Westside, which first opened in 1956. It’s located in the AUC neighborhood, named after the consortium of historically black colleges and universities all in the area: Clark Atlanta University, Spelman College, Morehouse College and the Morehouse School of Medicine.

Since he began honing his craft, Pyles has learned a barbershop can shape more than hair.

As one of the newly announced Westside Innovation Fellows at the Center for Civic Innovation, Pyles will get support for the life-shaping aspect of being a barber. The six-month fellowship provides business training, partnerships, mentorship and early stage capital for eight social entrepreneurs on Atlanta’s Westside. Over 120 community members applied, and in May, 44 finalists got to pitch their ideas to community members, who then voted. Four of the fellows are women-led businesses, nearly all aim to create new jobs in the neighborhood, and 75 percent of the fellows live in the neighborhood they are directly serving.

“The project that I’ve been voted to do is really strengthening the areas that the barbershop already does,” says Pyles, who is already mentoring about 12 to 13 young men. With financial and technical assistance from the fellowship, he plans to do more structured outreach to students and other youth in the area, and learn how to rally support to build programming around mentorships.

“I would like to have a place for them to come specifically to get tutoring, to get some type of exposure to jobs, and whatever type of training that the younger kids need,” he says. “So that was basically my pitch, a barbershop that had the mentorship program and a male resource center, all encompassing one building.”

In part because it’s in a men’s barbershop, the mentoring program will focus on men.

“Young men are just recycling in and out of jail,” Pyles says. “I know of a lot of young men that make money in the street and they really wish that they had another skill besides entrepreneurship of selling. If they had another skill, they could use the selling portion along with their skill to probably make the money legally.”

Pyles plans to leverage the barbershop’s diverse clientele, including clergy, academia, finance professionals, professional athletes and more, as a source of inspiration and support for young men with all kinds of career aspirations.

“If a college student is majoring in finance, I connect them to somebody that’s a loan officer in a bank,” says Pyles. “If a college student says they need some mentorship based on a dream that they have, they want to be a reverend, maybe I can connect them with one of the reverends that come to the barbershop and they can have some mentorship or a little bit of guidance to help them with their life plan.”

“I don’t like to use the word jobs,” he says. “There’s an acronym for J-O-B meaning Just Over Broke. I’m more into finding ways to create income and the ‘job’ title is so limiting to that concept.”

The Center interviewed each of the 120 applicants in person. “We knew, from even just other application processes, that the application doesn’t fully always tell the story of the entrepreneur,” says Rohit Malhotra, the Center’s founder and executive director.

After interviews, they narrowed the field down to the 44 finalists. “We did a rubric where our team was able to evaluate, number one, can we help these folks? Are they a good fit for this program? Is it sustainable? Is it scalable? Does it have a community component? Does it actually create jobs?” Malhotra explains.

The Westside Innovation Fellows are just one piece of a larger $30 million community benefits plan between Arthur Blank, owner of the NFL’s Atlanta Falcons, and the city of Atlanta, as part of approving construction and $200 million in municipal bonds for a new stadium.

The new stadium is right next to the current stadium, on Atlanta’s Westside, adjacent to the AUC neighborhood. The old stadium also had some community benefits tied to its construction. “I wouldn’t say it was a fail, but there were some challenges with that experience,” Pyles says.

“To be able to really help create and facilitate the kind of change everyone wants to see, it’s going to have to be a mix of actors from the inside, groups and residents and leadership from the neighborhood,” says Fernandez, vice president for community development at the foundation. “But also bringing in outsider experts and expertise and providers. We’ve been trying to think through what is a good balance of that.”

Fernandez says the foundation would consider investing further if there’s traction for any of the ideas. In the meantime, he’s working to spread the gospel of inclusive community development.

“Like anything else, it’s a mixed bag. We have 12 to 14 founding partners [in the community benefits plan]. Some completely get it, they’re already on board,” Fernandez says. “Some you need to bring them along a little bit because they just haven’t done that before. To me, that’s part of my job is to get them there, to see the value of it, why it’s important, why it hopefully makes things more impactful and effective.”