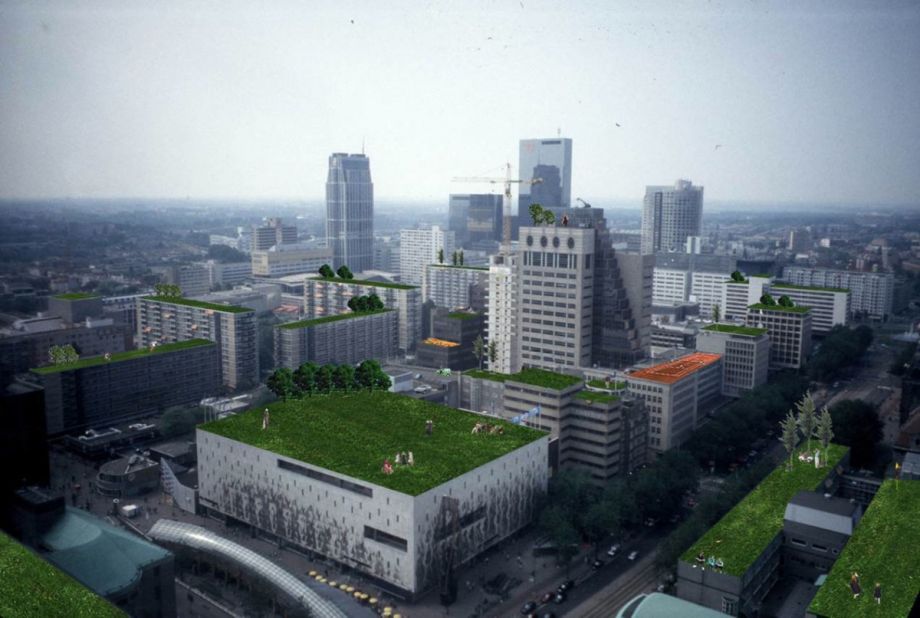 Green roofs are just one of many ambitious plans laid out in the Rotterdam Climate Initiative. Photo credit: dmopsy via Flickr

Brenda Dirkse, a member of the city council here, has lived in Rotterdam all her life, and when it came time to buy a home she knew exactly what she wanted. “I always consider myself lucky to live on the third floor,” she says. “My apartment gets better light, has a cheaper mortgage and has absolutely no chance of flooding!”

Depending on the coming decades, that last point may end up being its best feature.

When choosing a house in this city, many familiar factors come into play. But one part of the decision-making process is distinctly Dutch: how high off the ground to live. In Rotterdam, 90 percent of the city’s inhabitants live below sea level, and some parts of the city are as much as 7 meters below sea level. Because of its location at the delta of the Rhine River (along a northern distributary called the Nieuwe Maas) Rotterdam is exposed to flooding from three sources: the North Sea, the Rhine River and heavy rainfall.

This triple-threat of vulnerability is what led city leaders to take an active stance against the potential devastation of climate change. Left unchallenged, rising sea levels would mean the end of the city. So in May 2007, Rotterdam initiated one of the world’s most ambitious and comprehensive municipal-based programs to not only mitigate, but actually reverse the effects of climate change in and around the city.

The Rotterdam Climate Initiative (RCI) aspires to achieve a 50 percent reduction in CO2 emissions compared to 1990 levels by 2025, and “fully adapt” to climate change by the same year. It hopes to achieve these goals through a range of efforts, including sequestering carbon dioxide underground, incentivizing businesses to go green and developing novel resource-management strategies throughout the city. According to RCI spokeswoman Esther Philipsen, the original proposal came from the city’s economic advisory board, and recommended that Rotterdam “begin reducing the carbon intensity of the city and port in order to increase the quality of life and competitive position of the city.”

In this port city, the four most suitable partners for the task soon fell into place: the City of Rotterdam, the Rotterdam Port Authority, Deltalinqs and DCMR. As Philipsen describes them, Deltalinqs “represents the common interests of all the logistical and industrial companies in the Rotterdam port and industrial areas, (and) DCMR is the environmental protection agency of local and regional authorities in the Rijnmond region.” These groups were chosen because “they were the logical partners necessary for the further development of the city.”

For a project this ambitious, the budget is equally impressive: Rotterdam alone has committed €80 million ($107 million) to the initiative – no small beer for a city of only 610,000 residents. The money will be used “for project start-ups, research, business cases, implementation of municipal projects, coordination, communication and (small scale) subsidies,” says Philipsen. In 2007, this all-star cast signed the paperwork, jointly founded the RCI and began mapping out their plan of attack.

Chris Roorda, a researcher with the Dutch Research Institute for Transitions (DRIFT), points out that “one of the program’s strongest aspects is its unusual organization: a small office within the municipality that is accountable to an independent board.” Jan Rotmans, a professor in sustainability transitions, is on that board. And yet, he is also one of the project’s most vocal critics. Rotmans and Roorda are both members of DRIFT, the research team that has been monitoring RCI for years. In 2009, the team published a report criticizing Rotterdam’s goal of reducing CO2 emissions by 50 percent by planning to sequester that CO2 underground. The plan was to capture CO2 from Rotterdam’s harbor and industrial areas, and pump it into a gas field located 170 kilometers north of the city. Operated by GDF Suez, the natural gas extracted there is already partially separated from CO2 on site and injected back into the gas field, four kilometers below the surface of the earth. Rotterdam wanted to expand this operation and pump its own captured CO2 down there, too. But based on DRIFT’s calculations, if this storage plan failed in any way, CO2 emissions would not decrease 50 percent, but rather increase by 40 percent. With a huge financial investment at stake, the report was not well received, and the RCI board explicitly asked DRIFT not to release it to the public. In a recent column for NUzakelijk, Rotmans pointed out this earlier warning and claimed that that particular program has “almost zero chance of meeting its targets.”

Nevertheless, RCI is pushing ahead with smaller-scale pilot projects and its official Adaptation Strategy. The entire concept is based around a business model that makes green choices more financially enticing for entrepreneurs and large companies. Want a green roof? As part of the RCI, the city will subsidize your grass up to €35 ($50) per square meter. In fact, as of September 2013, Rotterdam already has 130,000 square meters of green roof space – the equivalent of 18 soccer fields. By 2030, the city hopes to have 800,000 square meters.

The RCI is also pursuing affordable floating housing models. In the Stadshaven district, a former industrial area bordering the city and the harbor, there are plans underway to construct hundreds of floating homes. The project represents an effort to redevelop the area and provide a kind of urban buffer zone, while still ensuring homeowners’ safety from potential floodwaters.

And rainwater runoff, another major challenge for this waterlogged city, is also a focus. Commissioned by the RCI in 2007, design firm De Urbanisten spent six years developing a “water square” prototype, fully imagined from concept to typology to policy to spatial design. The water square is located at Benthamplein, in the city center. Three basins collect overflow storm water from the surrounding roofs, parking lots and paved space. When it rains, shiny stainless-steel gutters channel the water into the basins in a visible and dynamic way, before slowly releasing it into the drainage system. When the weather is dry, the basins function as a combination urban amphitheater, athletic field and skate park.

Between now and 2014, the RCI is mainly focused on completing the research for the climate-proofing strategy, while also implementing a few pilot projects like the water square. RCI’s pioneering, multi-level collaboration among government, companies, knowledge institutions and citizens allows everyone to take part in what has become a truly collective process. This bottom-up approach combines Rotterdam’s strengths—powerful harbor companies, smaller-scale businesses and avant garde designers—to achieve shared “green growth” at various urban scales. As Brenda Dirkse puts it, “The strongest aspect of the RCI is that they create awareness about the environment and link sustainability to the economy. Basically, they turn a threat into an opportunity.”