A new ordinance may restrict the placement of electronic billboards in Pittsburgh. But some preservationists and neighborhood advocates are pushing for a full ban on large-scale outdoor ads.

On Penn Avenue, at least two homes, a plumber’s shop, and a bar share this single block with five billboards. Andrew Moore

In some Pittsburgh neighborhoods, storefronts, row-homes, and other neighborhood amenities have been obstructed and sometimes overrun by billboards – the size and scale of which you might find along the interstate highway system. Where billboards should be placed, and what they should look like, has become a contentious issue throughout the region, and new zoning codes are being written by Pittsburgh’s department of planning.

The new ordinance would only regulate electronic billboards, though, with rules regarding size, lighting, and appropriate districts. Some urbanists say these regulatory efforts are minimal and too accommodating of the billboard industry’s wishes.

City councilman William Peduto says the current Mayoral administration has been cozy with the industry, and that city leadership has been too willing to negotiate billboard placement – including using land swaps – instead of fighting against their placement in neighborhoods under any circumstance.

“In no city has that [relationship] ever benefited the city in the long run,” Peduto says. “Over the years, what we have seen is a proliferation [of billboards] in places where you wouldn’t see them in other cities.” 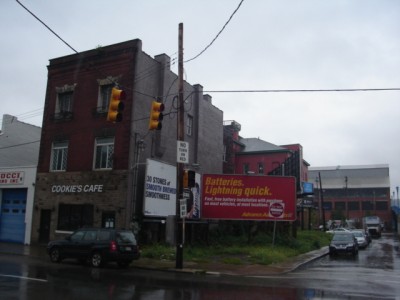 Four states currently prohibit billboards: Vermont, Alaska, Hawaii, and Maine. And throughout the country, as many as 700 communities have bans. In 2007, Sao Paulo, Brazil, passed a billboard in order to deal with years of an unregulated billboard industry. It is highly unlikely that Pittsburgh would institute a similar billboard ban, but Peduto says organizations are forming to partner with national groups in order to address these issues of visual blight.

Scenic America, a national non-profit, is dedicated to reducing billboard blight throughout the country through education, advocacy, and technology services. Scenic Pittsburgh, a new local organization, would work on similar issues at the local level.

The Young Preservationists Association of Pittsburgh, an education and advocacy group, has recently spoken out against the proliferation of billboards. “These billboards basically have no place in neighborhoods where people are living,” says Chuck Alcorn, YPA Board Secretary. “They distract people from their everyday business – even from the pleasure of just being outside.”

According to Alcorn, there are over 900 billboards in the city of Pittsburgh, not counting those in municipalities which surround the city. Alcorn says these billboards are especially damaging when placed in local business districts.

“[Neighborhoods] have a tough enough job promoting their own businesses,” he says, “and now they have billboards taking away from [local attention].”

Regarding the new zoning ordinance, Peduto says he is happy that a number of good watchdog groups are a part of it, and that the issue is being debated nationally. But he is withholding an opinion on the ordinance itself until it comes before city council.

“I want nothing less for Pittsburgh,” Peduto says, “than what other cities are getting in terms of protection.”