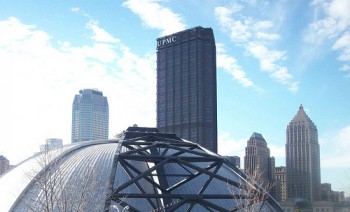 Urban planners once dealt with such human and commercial hemorrhaging by trying to bring businesses and residents back — a strategy in keeping with America’s obsession with expansion, and its entrenched belief that bigger is better. But now Pittsburgh — much like other ailing Rust Belt towns — is upending that approach in favor of a most un-American idea: deliberately going smaller to match shrinking realities.

— Tony Dokoupil, “Cutting Down To Size: Postindustrial cities, even relatively successful ones such as Pittsburgh, are trying to manage, rather than just reverse, population loss.” Newsweek

The 19-second implosion of Three Rivers Stadium on the morning of February 11, 2001 cost the City of Pittsburgh some $5.1 million and I was not going to miss it. I was out all night, in fact, drinking Iron City Beer with a group of friends as we shared stories about the stadium and the events we’d seen there, the people we’d met.

I’d watched my first professional baseball game with huge group of other kids at Three Rivers Stadium from somewhere in the orange bleachers by the roof. Andy Van Slyke was leading the Pirates to a National League Championship Series that year. I remember, years later, while I was in high school, I’d had a chance to play an American Legion baseball game on that field. I’d pitched from the same mound Doug Drabek had pitched from, sat in the same dugout Willie Stargel had sat in.

In the hours after midnight on February 11, 2000, I made sure to tell everyone I could that in addition to throwing two scoreless innings during that American Legion game, I’d also bounced a double over the left-center field wall. Who knows if that’s what actually happened.

When the building finally imploded in a massive dust cloud that morning, I remember watching it from a parking lot under the Incline off West Carson Street. And I remember feeling heartsick — like someone or something close had just died or ended or ceased to be.

Today, I haven’t thrown a baseball in over a decade and the Pirates haven’t been in a championship series of any kind in 17 years. But I’ve been having flashbacks — not many of them pleasant or heartwarming — from February 2000 as reports about “right-sizing” Pittsburgh hit the Web, and plans go forward to demolish one of Pittsburgh’s best-known historic landmarks.

Consider Mellon Arena (pictured above): For nearly 50 years, it’s been one of the nation’s only “retractable dome” multi-use auditoriums. During that time it has hosted NCAA basketball and NHL hockey games, concerts for every kind of big name musician and performer you can think of, as well as the occasional charitable event, religious gathering and probably lots of other uses I’m not considering. This year, Pittsburgh Penguin management announced that the Igloo — as Mellon Arena is affectionately known — will be torn down with the help of the City of Pittsburgh to make room for condos, hotels and a giant parking lot. Granted, across the street you’ve got the makings of Pittsburgh’s newest sports complex, the Consol Energy Center, but the idea of tearing down the Mellon Arena gives some locals pause.

Exhibit A is Rob Pfaffmann. From the Pittsburgh Post-Gazette:

Mr. Pfaffmann is pitching a plan to transform the old arena into a community ice skating rink, or perhaps a Penguins practice facility, surrounded by restaurants, retail, a hotel, and a small amphitheater. His plan calls for removing most of the arena’s seating bowl but keeping the structure intact, including the retractable roof. He wants to reconnect Wylie Avenue in the Hill District with Downtown as a pedestrian greenway. By reusing the arena, the Penguins may be able to secure historic tax credits for redevelopment of the land, he said. He also believes it would be more cost effective to use existing infrastructure than tearing everything down and starting anew.

Not everyone agrees with him, of course. But why demolish a piece of history when you don’t need to?

Last week, Newsweek ran a story by Tony Dokoupil that highlighted the issue of “right-sizing” — the concept by which political leaders spend taxpayer dollars to tear down abandoned, unsafe and unsightly buildings — as though it were breaking news, some new and foreign concept to describe what Pittsburgh and other so-called Rust Belt Cities have finally decided to do after 60 years of population decline. The article claimed that Pittsburgh is “deliberately going smaller” and avoiding the “bring[ing] businesses and residents back” approach to urban planning “in favor of a most un-American idea: deliberately going smaller to match shrinking realities.”

The reality, however, is that the destroy-to-rebuild mentality has been prominent in Pittsburgh since those 100,000 factory jobs and 300,000 people began their exodus decades ago. It’s what caused the Mellon Arena to be built in the first place. And it’s certainly been around since February, 2000.

Furthermore, the Newsweek assertion that Pittsburgh is “deliberately going smaller” seems to misstate facts. When Three Rivers Stadium was torn down, it was done to make room for two new sports stadiums that would cost the city and the state nearly $1 billion. The hope was not — as I understood it anyway — that those stadiums would help the city “[try] to manage” its dwindling population. They were built to attract new business, new people, more money. Same went for the new and shimmering “green” David L. Lawrence Convention Center, and that international economic summit Pittsburgh hosted a few months back, and the new Consol Energy Center nearing completion in the middle of downtown Pittsburgh. The goal is always to grow. Whether or not that pans out is another story.

I don’t have any heartfelt memories from Mellon Arena. It’s blasphemy to say here in Pittsburgh, but I’ve never been a hockey fan and I never had more than a passing interest in the occasional show that came through the arena. But I do know that it used to be called the Civic Arena. And I also know that when Dokoupil talks about right-sizing, he’s not talking about arenas and stadiums, but about dilapidated former homes in some of Pittsburgh’s poorest neighborhoods.

When Garfield’s gone — right-sized out of existence with Mayor Ravenstahl’s expanding demolition budget — will the Mellon Arena’s replacement seem worth it? Will the city have managed its dwindling population into prosperity? Only time will tell. Hopefully in the meantime, the city won’t right-size away its considerable history as well.

Matt Stroud is a reporter at the Innocence Institute of Point Park University, a journalism-based organization that investigates wrongful conviction claims from prisoners in and around Pittsburgh. For more information, visit www.pointpark.edu/innocence or email mstroud@pointpark.edu.