Occupy Wall Street protesters are chasing the tail and not the head. Rising poverty and stagnant opportunities weren’t caused by financiers anymore than the hostage crisis was caused by President Carter.

There’s been a lot of griping about the coverage the Occupy Wall Street protest is getting in widely read media outlets in the United States and abroad. Some consider it the reconstitution of the pacifistic protests of the 1960’s; coherent message was left to the Black Panthers and Weather Underground, the youth were there to simply stop a war and it didn’t matter if they had signs saying different things. The lack of media coverage, for them, is simply another chapter in the saga of man-against-money and a sign that the editorial boards at the Times, Post, Picayune, and Tribune are too deep in the pockets of financiers to see the boiling discontent in Southern Manhattan. Others, however, see reality.

It’s inarguable that income inequality and poverty are burgeoning problems in this country and much of the blame can be laid at the doors of misplaced priorities and a favorable regulatory schematic. Because protesting against abstractions is a difficult task without professional propagandists (no, the Tea Party groups are not made up of savant sloganeers) most turn to symbols and the canyon down on Wall Street is the most tangible embodiment of excess the protesters can think of (rather than, say, Westport or Stamford or, um, Towaco) so they gather, MacBooks in laps, and espouse whatever it is they espouse.

It’s easy to make light of people “doing” something from the comfort of a desk; bloggers skirt risk catholically, the Internet provides universal anonymity. The Occupy Wall Street participants are active and dedicated and charmingly unorganized. They are there because they see the world, as many good minds do, in terms of fair and unfair, the latter coming around a lot more than the former lately.

Unfortunately the protesters, who’s hearts are undoubtedly in the right place, are chasing the tail and not the head. Rising poverty and stagnant opportunities weren’t caused by financiers anymore than the hostage crisis was caused by President Carter, the cascading scenarios dictated the results rather than the individual actors. The mystifying belief that financial institutions stole cash out of our hands (TARP fund aside—do you want to imagine what would have happened without that? Didn’t think so.) is conjured heuristically—relative deprivation is a strong emotional argument.

Since Radials Blog this is a blog on urban problems let’s get to the main point: the current economic mess we find people—rather than institutions—in today is a symptom of significant underinvestment in urban infrastructure, especially in poor and predominantly non-white neighborhoods. Public transportation maps and playfully informative Census renderings make it unnervingly easy to look at correlations between transit access and incomes in a city like New York or Los Angeles. The consummately talented info-artists over at the Center for Urban Pedagogy made this (I really, really encourage you all to visit the site; it has statistics on every neighborhood in NYC and the income distributions are stunning, visually and informationally): 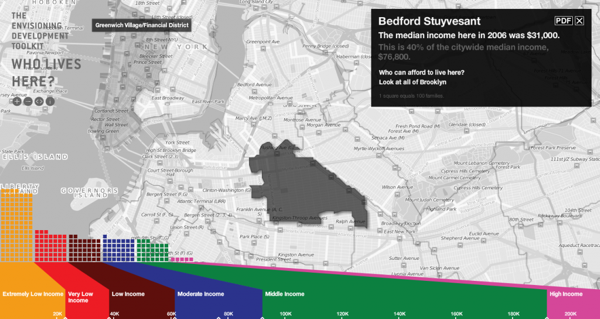 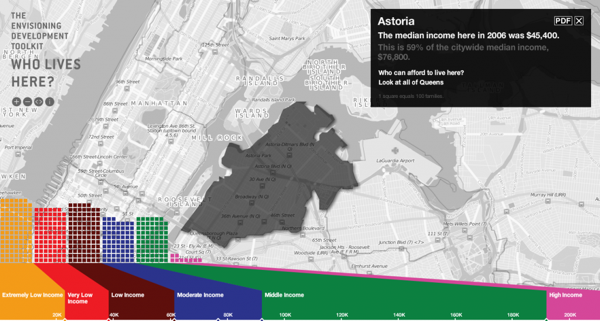 Statisticians would warn me against weighing one variable too heavily, especially in something as mercurial and fluid as a city, but neighborhoods like Bed-Stuy and Astoria are frustratingly uncluttered. In the most extreme cases you can walk 15 blocks and never see a subway stop. For a neighborhood in New York to be this barren is indicative of disproportionate access to integral urban services like transit and the potential benefits that come along with it.

There are systemic issues in policy and investment that are manifesting themselves in poorer people and deteriorating faith. Wall Street has, of course, made mistakes that fed failures in the mortgage market and retirement funds, but greed is an equal opportunity vice and the myriad anecdotes of overextended credit backed by promises of a quick profit find the hands of the protesters pointing back at themselves. The anger at bankers and equity gurus and hedge fund managers is about one thing: inequality. The thought that income gaps are best solved by making the top come down is burning a candle without a wick. The passion and cause can be directed towards a more meaningful vector; leveling the playing field through access to public goods is achievable and supremely important, asking billionaires to turn over their paycheck isn’t.