On January 20, something is coming to Washington D.C. Whether it’s change or millions of people waiting in three-hour lines to use the bathroom, it will be interesting to see how the District handles this two-day mass influx.

On January 20, change is coming to Washington D.C. — along with anywhere between one and five million Obama fans who will brave 33-degree temperatures while sharing 5,000 porta-potties. George Washington University Professor John Banzhaf has written the Presidential Inaugural Committee warning of the rather unpleasant smell of potential porta-potty lawsuits. Another George, our outgoing president, has declared a state of emergency over the event that will cost the metropolitan area around $100 million dollars. 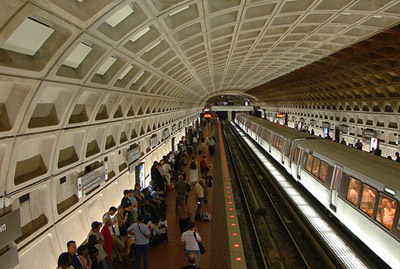 The Washington Metro Transit Authority (WMATA) is preparing to serve 120,000 passengers an hour — its maximum capacity — for the entire day starting at 3 a.m., and is printing two million inaugural subway system maps. If trouble breaks out, there will be 10,000 U.S. National Guard personnel, 8,000 D.C. Police and 550 Metro Police on hand. That doesn’t include the 10,000 military personnel that will be marching in the parade. The route of the parade is flanked by 5,000 bleacher seats, which sold out in less than one minute at $25 a pop.

Local residents are renting out their one-bedroom apartments on Craigslist for as high as $10,000 for the weekend. One homeowner, whose address is less than a mile away from mine, is asking for $40,000 for a two-bedroom house. You can still get a hotel in sort-of nearby Fairfax, Virginia for $200 a night, but you won’t be able to drive to the inauguration as the district is cutting off several access routes from the beltway. Because of the potential traffic nightmare, most people who work in D.C. will be treated to a long weekend.

There are signs, however, that the estimates may be a little too high. Calls to Dulles, Ronald Reagan and BWI airports reveal that while air traffic is slightly higher on inauguration weekend compared to other weekends in January, there are still plenty of flights available. In November, estimates for the inauguration crowd reached 5 million, but The Washington Post has whittled that number down to 2 million. Over 10,000 charter buses were once said to have been scheduled to trek to the National Mall, but the District now has that number down to 3,000.

The events leading up to Obama’s big day mirror those that took place before 1994’s Million Man March, also in D.C. Original crowd estimates for that event reached as high as 3 million. D.C. Police estimated that 400,000 actually attended the event — and that was in October, when the temperature wasn’t near freezing.

The only thing certain about January 20 is that something is coming to Washington D.C., and whether it’s change or millions of people waiting in three-hour lines to use the bathroom, it will be interesting to see how the District handles this two-day mass influx.

Stay tuned to the Daily Report during the inauguration as former NAC contributors Calista Condo, Nissa Lee and I live blog from the event!