For the last three decades, the exurban counties on the fringe of the Twin Cities metropolitan area have been among the fastest growing counties in Minnesota. But last year, thanks to both Baby Boomers and Milleanials, that growth has slowed dramatically.

Since 2007 Minnesota’s exurban growth rate slowed to 1.1 percent, down from 25.5 percent in the years prior. Flickr user Worker101

This piece originally appeared on MinnPost.

For the last three decades, the exurban counties on the fringe of the Twin Cities metropolitan area have been among the fastest growing counties in Minnesota.

However, thanks to rising gasoline prices as well as changing demographics and housing preferences, that exurban population boom has slowed dramatically. The latest population estimates from the U.S. Census Bureau indicate that people no longer are rushing to fringe communities for large lots and spacious homes.

In 2011, the growth rate in Hennepin and Ramsey counties (which include Minneapolis and St. Paul, respectively) actually exceeded the rate in the six exurban counties of Carver, Chisago, Isanti, Scott, Sherburne and Wright, according to an analysis by Susan Brower, Minnesota’s new state demographer.

The slowdown in exurban growth is part of a national pattern reported by the Census Bureau. Nationwide, the exurban population increased just 0.4 percent between 2010 and 2011, just half the 0.8 percent growth rate for cities and their surrounding urban areas.

“The heyday of exurbs may well be behind us,” Yale University economist Robert Shiller told the Associated Press. Shiller is the co-creator of Standard & Poor’s housing index.

William Frey, a senior fellow at the Brookings Institution, analyzed population trends in the nation’s 100 largest metro areas over the last three decades and found “exurban and outer suburban counties experienced a population boom and bust in the 2000s.”

“Aggregate population growth in counties near the metropolitan fringe peaked in 2005-2006, and declined more than half by 2009-2010,” Frey said. “By contrast, growth rates in cities and dense inner suburbs rose in the latter half of the decade.”

Brower said Minnesota is seeing the same slowdown in exurban growth that the Census Bureau and others have identified nationally.

However, the exurban growth rate has declined dramatically since 2007—plummeting to 1.1 percent in 2011. That was slightly below the 1.2 percent growth rate for the urban counties of Hennepin and Ramsey.

Brower said the likely reasons for the slowdown include:

• The lingering effects of the Great Recession and the overall decline in population growth.
• Rising gasoline prices and the increased reluctance of people to make long commutes.
• The aging of the population and the desire of empty nesters to live closer to services and amenities.
• The preference among young people to live in walkable urban neighborhoods served by transit.

“It’s probably all of those things,” she said.

Brower said the demand for smaller homes closer to the urban core is likely to increase in the course of the decade. Between 2010 and 2020, she projects the largest increases in households will be married couples ages 55 or older without children and single people ages 55 and older. 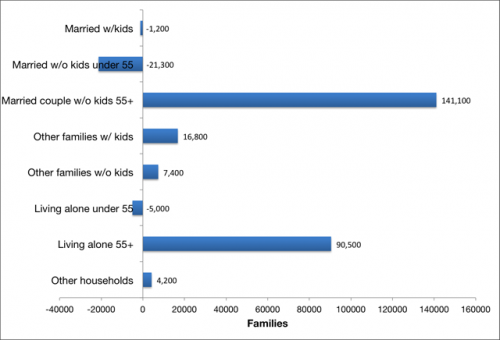 In 2010, the Minnesota Department of Human Services—in collaboration with several other agencies—surveyed more than 3,800 members of the Baby Boomer generation to better understand their needs as they begin to turn 65.

• Nearly one-third were expecting to move from their current home in the next decade.
• Most respondents wanted to move due to home characteristics (41 percent), mainly because they desire a smaller home (14 percent), less home maintenance (8 percent) or want the option of living on one level (3 percent).
• Nearly half of respondents (44 percent) wanted to move closer to services and amenities, while a slightly smaller portion of respondents (38 percent) wanted to move closer to friends and family.
• 42 percent expected to live in a single-family home when they moved, while 28 percent were considering a condominium or townhome, 10 percent were considering an apartment and the rest were unsure.

Writing last fall in the New York Times, urban planning expert Christopher Leinberger cited the market preferences of Baby Boomers and Millennials in predicting that the demand for housing in the exurbs is not coming back.

“Simply put, there has been a profound structural shift—a reversal of what took place in the 1950s, when drivable suburbs boomed and flourished as center cities emptied and withered.”