Join Next American City and Hidden City Philadelphia for our Issue 23 Launch Party to be held at Philadelphia’s own Royal Theater on Wednesday, June 17!

Next American City is throwing a party at The Royal Theater, one of Philadelphia’s historical and architectural landmarks, and you are invited! We’ll even provide the hard hats! Come join us as we celebrate the launch of Issue 23 with food, drinks and great conversation. Publisher and editor-in-chief Diana Lind will re-cap highlights from the issue, which is packed with features including a profile of Newark’s Mayor Cory Booker, an examination of air quality in American cities, and a debate about the value of convention centers. Interviews with a young environmental justice activist, a forward-thinking web entrepreneur, and an urban theorist round out the issue.

Admission is free for subscribers. Admission for non-subscribers is $15 in advance or $20 at the door and includes a one-year subscription to the magazine and free entry to all NAC events. 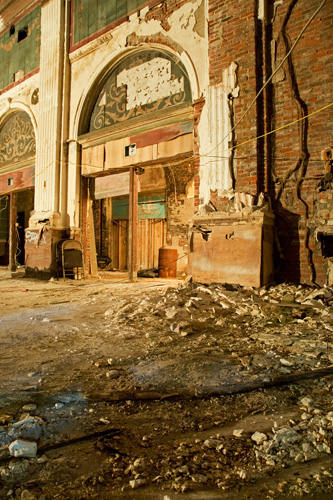 The Royal Theater, called “American’s Finest Colored Photoplay House,” upon its 1920 opening, was the first theater run by African-Americans in the city. The theater became a beacon for the African-American entertainment sector on South Street. Patrons regularly filled the theater’s 1,200 seats to see acts like Fats Waller and Bessie Smith. Patrons also loved the films at the Royal, which included films shot at local Colored Pictures Film Corporation. The first staff of the theater went on to become the nucleus of the Negro Motion Pictures Operators Union. The community was closely tied to the theater; neighborhood residents were the Royal’s most loyal patrons and participated in talent shows and radio broadcasts. Business owners also benefited from increased foot traffic. But by the 1960s, the threat of the construction of an expressway in the neighborhood (that never materialized) and Civil Rights legislation, which allowed African-Americans more entertainment options, decimated the Royal’s neighborhood and attendance. The Royal closed its doors in 1970 and quickly deteriorated. Trees sprouted from its masonry and moisture destroyed the interior. Urban decay took hold of the neighborhood by the 1980s, with drugs and empty lots becoming staples of the neighborhood. By the early 1990s, the Royal was up for demolition. But the demolition request spurred new interest in the Royal, but for years, an owner was hard to come by. Finally, by 2000, native Philadelphian Kenny Gamble purchased the theater. Gamble hopes to rehabilitate it in the new resurgent neighborhood.