New Orleans is a hard city for good ideas. It’s not that there is a lack of them, just the opposite. The city is full of good ideas — ideas that are never implemented. It’s a city full of displaced dreamers, talented people who come from all over to a place where success as it is defined elsewhere is overshadowed by indigenous social markers most often involving whiskey and parades.

I was skeptical last year when Dan Cameron, a museum curator from New York unveiled a plan to make New Orleans host to the largest biennial of international contemporary art ever organized in the United States. The three-month-long Prospect. 1 New Orleans biennial would bring 81 artists from all over the globe to create works in random and no-so-random sites scattered around the city. If all went well, the event could catapult New Orleans into the ranks of international art destinations like Berlin, Venice and New York where biennales have become multimillion-dollar moneymakers.

P1 opened Halloween weekend. Cameron estimates that more than 3,500 people flew in that opening Friday, a number I can partially vouch for given the three New Yorkers who camped out in my apartment and seemed to be getting a lot of phone calls from other New Yorkers who were in town. In subsequent weeks, the influx of art-bound tourists has waned. Local museums hosting exhibitions reported attendance numbers for Nov. 5-9 ranging from 747 at the Prospect One show at the Old U.S. Mint to 1,910 at the New Orleans Museum. The numbers indicate that initial hopes of bringing 100,000 visitors to the city may prove too ambitious. But more important than the number of booked hotel rooms or crowded sofas is the impact the show could have on our understanding of this city’s resilience. At a critical point in the city’s lagging recovery the dreamers came together and won. The idea worked.

In one neighborhood devastated by Katrina and decades of disinvestment, New Orleans artist Kirsha Kaechele aka KK Project has transformed a ravaged block into a revolving art installation wherein entire homes are transformed into otherworldly sights and avant-garde dinner parties happen in the middle of the street. For the biennial, Kaechelle commissioned artists Mel Chin and Peter Nadin to transform her St. Roch houses. The art was equally stark and surreal. Mel Chin’s “Safehouse” featured an enormous metallic-silver wooden vault door that replaced the door of a traditional New Orleans shotgun house, abandoned after Katrina. The rooms of the house were papered with fake dollar bills designed by children in New Orleans and around the country and symbolic of the money needed to remediate neighborhoods of the city crippled with toxic lead content in the soil. Outside the house was an armored car that Chin intends to drive to Washington DC with the fake “fundred” bills to lobby for remediation of the poisoned neighborhoods. 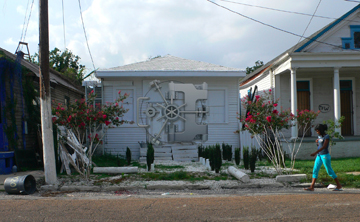 Two doors’ down from Chin’s installation, Peter Nadin’s “The First Mark” is pierced from roof to floor with stout 27-foot wooden poles, like huge javelins tossed from afar. 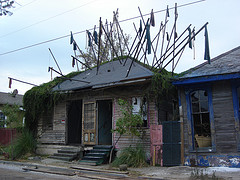 Kaechaele hosted a feast for 250 diners that first Saturday night, serving barbecue on a wood table that went the length of a city block. Waitresses in kimonos brought guests king crab legs and other delicacies on custom-made wood platters. Enormous outdoor fireplaces provided the only light. Uma Thurman was there. Chin and Nadin’s houses took on new surrealism when seen in the context of long banquet table and the elegantly dressed guests, many in de rigeur tight black outfits that made one think that the door to Chin’s vault might lead to the Willamsburg Savings Bank rather that to the front parlor of a New Orleans cottage.

And when one of the local crack addicts danced on the steps of one of the installations, it wasn’t clear whether he was a party crasher or part of the art, until policemen escorted him from the street.

The art brought home the haunting realities that this city lives. Those who came to see Mark Bradford’s 64-foot Lower Ninth Ward plywood ark “Mithra” also saw the emptiness around it. 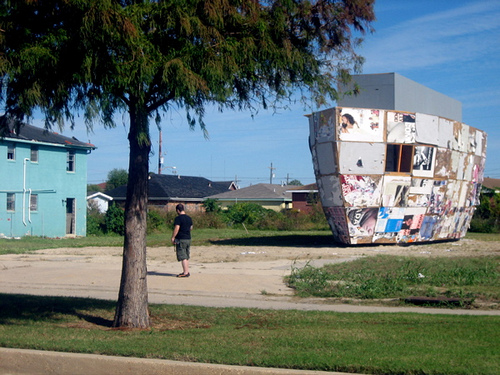 Those who came to see Janine Antoni’s installation “T-E-A-R”, a multimedia piece that juxtaposed a video closeup of her own unblinking eye and a scarred lead-wrapped wrecking ball, had to pass several blocks of storm-busted, vacant shotgun shacks to get there. 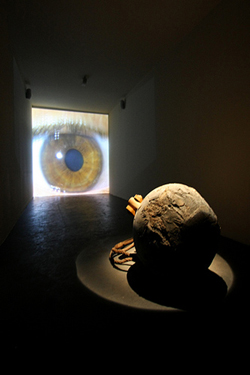 People who stopped at Wangeshi Mutu’s light-drawn mirage of a home, “Miss Sarah’s House” wondered if the real house had one bedroom or two. 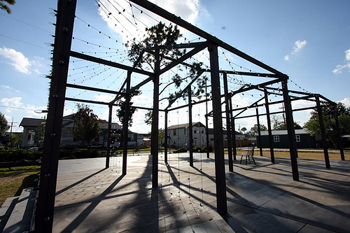 They saw these art objects, walked in their tumbledown, devastated gallery and remembered. The all-too-familiar sight of two concrete front steps leading nowhere silenced my friends, the couch-surfers. “Is that a piece or,” the question trailing off like the houseless front steps.

For most of that first weekend, I felt like I was in an alternate New Orleans where the storm’s wreckage was curated, but not felt. Where violence was evoked, but not felt. That broke apart Sunday night when driving a block from the KK Projects houses in St. Roch. The fireplaces were gone. Instead, police flashers were lighting the street hazy blue. Someone had put out orange cones where bullets lay. The fire was gunshots on Sunday night. Art will go on. But so will the city. Our job will be to keep lighting the public streets with people rather than police cars, creating the art and working together to invite everyone to the party.